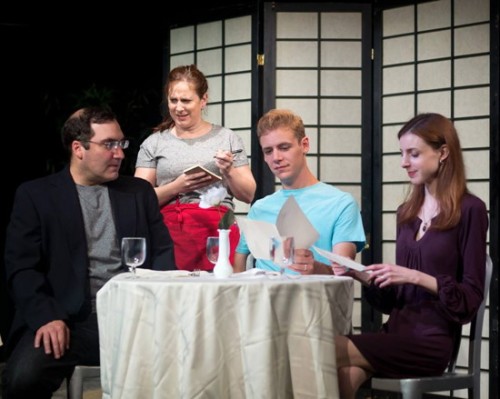 The suspense escalates—punctuated by humor and moments of sheer poetry—in Steven Dietz’s Private Eyes. Somewhat reminiscent of Harold Pinter’s Betrayal and even of David Ives’s Venus in Fur, it is nonetheless a creature of its own—with layers upon layers of possible truths and lies. As well as such all-too-sad revelations that eventually, in a relationship, the only way to surprise your partner is to hurt him or her. And, that telling the truth might best be done slowly.

At the heart of the play (and I don’t want to reveal too much) is the possibility that Lisa, a married actress, is rehearsing a play directed by Adrian, and the two go on to have an affair her husband, Matthew, suspects, but is never sure of.

This is a play that requires audience members to be on their toes—especially under Mikoni’s taut direction.

These characters, whose behaviors and motives may not be entirely clear except at the end, are accompanied at moments onstage by two whose identity is not even clear: Cory, who may be a private eye, and Frank, the apparent psychiatrist (who can be played by a man or a woman as long as the meaning of her name is underscored).

In a production by Silver Spring Stage that does full justice to the romanticism and mystery, and yes, convoluted, nature both of the play itself and of the human relationships of its characters (and, by extension, us), director Jeff Mikoni has used the stagehands effectively as a kind of ensemble. To be honest, I don’t know if the original production at the Arizona Theatre Company utilized stagehands that way, but it works. Part of the credit goes to Kristen Skolnik, stage manager.

This, the first full production of the 2015-2016 season, proves once again this theater’s courage in taking on theatrical challenges.

Mikoni has cast a little against type—and it works. The classically good-looking Noah Rich (Matthew) is the betrayed—maybe—husband, while Jeff Breslow is the not-dashing but still seductive Adrian. Rich carries the heaviest weight in the play, and he is up to the complexity of the role. He is sarcastic, heartbreaking, and tender, with an earnest manner that makes the audience (or at least me) wonder why anyone would desert him. Breslow, with a touch of Olivier in his accent and manner, is every bit the commanding director of the play within the play with secrets of his own.

Caity Brown’s Lisa captures the ambivalence and poignancy of a cheating (maybe) wife, more concerned about telling the truth than with the act of adultery. As Cory, Julia Morrissey has fewer moments on stage but makes the most, in a come-hither manner, of her dual roles as waitress and private eye. Leta Hall is the soothing, perceptive voice of reality we expect of therapists—with such pronouncements as “The right time to hurt someone never comes.”

In addition to lyrical, yet biting, observations about truth, as illustrated through the lens of adultery—Private Eyes offers a paean to theater itself and its art of illusion.

A smaller-than-usual (which was a shame) audience for a Sunday matinee was nevertheless lively and warm in its responsiveness. A man behind me, who was dozing a bit before the performance and during intermission, sat up for attention. This is a play that requires audience members to be on their toes—especially under Mikoni’s taut direction.

Maggie Modig, as scenic designer, uses a simple, almost bare platform at times as a stage within a stage as well as the repeated but slightly varied restaurant sets the playwright calls for. The evocative lighting design – including strobes – is by Tony Bishop. Mikoni doubled as the sound designer. Be forewarned that gunshots are part of that design. Vanessa Terzaghi, the costume designer, mostly has worked changes in the women of the cast. Also evocative was the mood music, especially before the play opens.