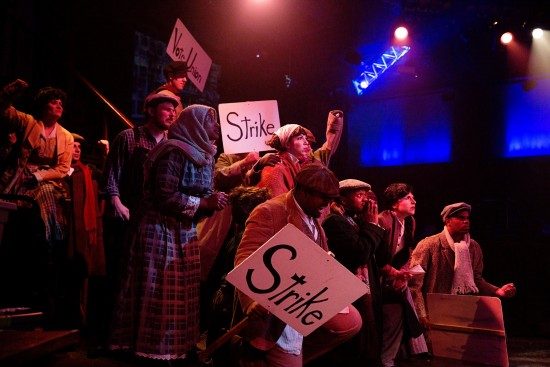 On July 22, 2015, the author of the 1975 novel, Ragtime, E. L. Doctorow passed away at the age of 84.  President Obama stated that Doctorow was “one of America’s greatest novelists.” Born in New York in 1931, Edgar Lawrence Doctorow was named after the author Edgar Allan Poe.  Could it be that the character of Edgar, Mother’s son, was named after himself?  More importantly, why does Doctorow’s story still resonate with those seeking the American dream?

Ragtime: The Musical, now playing at the Toby’s Dinner Theatre, takes it name from the era that it’s set in, the turn of the 2oth Century. Ragtime isn’t a play about ragtime music.  In fact, there isn’t much ragtime music in it.  Based upon Doctorow’s novel, the 1998 Broadway musical book is penned by Terrence McNally, lyrics by Lynn Ahrens, and music by Stephen Flaherty.

Directed and staged by Toby Orenstein and Lawrence B. Munsey, Toby’s powerful production of Ragtime: The Musical is ultimately a story about the American dream, hope, and the pursuit of equal justice.

…an unforgettable story about the American dream… I encourage anyone who has a dream to make time to see ‘Ragtime.’

Topics, such as immigration, racism, religion, politics, and class are covered in Ragtime: The Musical.   I don’t need to tell you that all of these topics are still very much relevant in today’s society.

While the subject matter is quite serious, it is important to note that there is also plenty of humor to get you laughing and lively music that will get you dancing in your seats.

All three families interact and connect with one another in an unforgettable story about the American dream.

It begins when Sarah (Ada Satterfield) leaves her baby in the garden of Mother’s home.  Mother takes in the baby and eventually Sarah while Father (played by a strong and commanding David Bosley-Reynolds) is away on business.  Coalhouse, the father of the baby, drives to their home every Sunday in hopes of reconnecting with his lost love Sarah who, at first won’t even talk to him.  For Coalhouse, the real American dream is family and equal justice.  Will he achieve these dreams?  How will Mother’s younger brother (Zac Brightbill) come in to play an important role?

Jewish immigrant Tateh brings his daughter (Camden Grace Lippert alternating with Ella Boodin) to America in hopes of giving her a better life.  Later, Tateh and his little girl meet Mother and her son Edgar (Jace Franco sharing the role with Gavin Willard).

One question that director Toby Orenstein has taught me to ask myself is “Do you find the performance believable?”  In the case of Kevin McAllister’s Coalhouse Walker, Jr., the answer is a resounding yes!  I was so drawn into his performance that I was rooting for him to be successful in rekindling his romance with Sarah.  One of the evenings highlights was the soaring duet “Wheels of a Dream” performed by McAllister and the very talented Ada Satterfield.  Together they made me believe that despite all odds that they could achieve the American dream.

The play has several generic names like Mother and Father.  Tateh, is also generic.  Tateh  is Yiddish for “Father.”  As the Jewish immigrant Tateh, Josh Simon is utterly superb.  Simon captures the essence of this dynamic character that refuses to accept failure for the sake of his love for his daughter.

Throughout the show, musical director Ross Scott Rawlings led the orchestra and cast to execute the peppy , upbeat-sounding syncopations, lively melodies, intricate rhythms and beautiful harmonies that is the musical style called Ragtime.  In particular, pay attention to the crisp enunciation on the vocals on the lush opening number, “Ragtime.” Other musical styles such as marches, cakewalks, and gospel are also featured in the heartfelt score.

Adding to the nostalgia are the period costumes by Lawrence B. Munsey, the dances choreographed by Ilona Kessell, the sets designed by David A. Hopkins, projections designed by Riki Kim, and lights designed by Lynn Joslin.

Toby’s production of Ragtime is a fitting tribute to those seeking the American dream and the man who wrote the novel Ragtime, E. L. Doctorow.  I encourage anyone who has a dream to make time to see Ragtime.

Advisory: Language, such as the “N” word are used throughout.  Gun shots and fighting are also in the story.