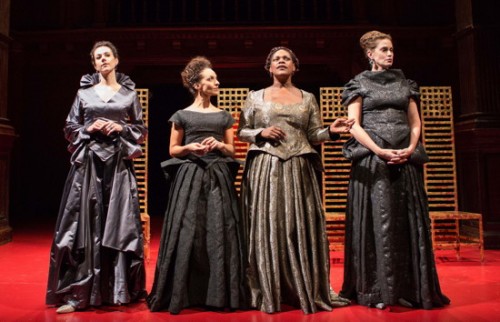 “Our fractured portrait [of Queen Elizabeth I] is like that caught for a moment by a kaleidoscope, not a camera; more in common with Picasso’s portraits than of any kind of naturalism…” writes Karin Coonrod, creator and director of Compagnia de’ Colombari’s texts&beheadings/ElizabethR at Folger Theatre. The piece combines Queen Elizabeth I’s writings with music and physical theatre to explore her life in a new way. The primary sources Coonrod used to create the show came from Folger’s Reading Room, and texts&beheadings/ElizabethR will be performed at Folger until moving to the Brooklyn Academy of Music as part of their 2015 Next Wave Festival.

texts&beheadings/ElizabethR highlights large themes of Elizabeth’s life through small snippets of her writing. Queen Elizabeth I was the daughter of Henry VIII and his ill-fated second wife, Anne Boleyn. Elizabeth’s story speaks to the historic monarchical power struggle, a struggle compounded by her identity as a woman. Four actors (Monique Barbee, Ayeje Feamster, Juliana Francis-Kelly, and Christina Spina) take turns playing Elizabeth and the three narrators. The play is broken into four movements about Elizabeth’s many life trials. Beginning with her unwillingness to wed, texts&beheadings/ElizabethR continues with stories of youth imprisonment and smallpox, torn mourning clothes, power struggles, and regality. Each part was separated from the others by the ominous sound of a guillotine blade.

As a concept texts&beheadings/ElizabethR was both innovative and creative: an artistic way to continue exploring the well-known history of a famed English queen. The narrators’ lines were modern and laced with familiarity, which provided an interesting foil to the formality of Queen Elizabeth’s own words and writing. The minimalist staging kept the four performers at the center of the play, while still setting a portentous mood with blood-red backlighting and slender golden high-backed chairs.

However, the most interesting facet of the show was the incorporation of medieval “games” theatre to highlight the challenges Elizabeth faced. In the performance, each time Elizabeth was forced to cope with unrelenting suitors, disloyal family members, or an aggressive court of public opinion she would call, “Game!” Then, in the absurdist fashion of medieval playhouses or Roman public games, the four actors caricatured and satirized Elizabeth’s struggles. In this regard, Coonrod’s biggest success in creating this work was her astuteness in combining the modern with the old in order to make something new.

However, although the conception of texts&beheadings/ElizabethR was appealing, parts of the performance were disjointed or lacking. The use of three narrators created a striking rapport, but they always seemed to hover between speaking in unison or in echo; they were rarely together enough to be in unison, nor were they distinct enough to be in echo. Additionally, setting some of the text to music allowed for a change of pace, but the haunting melodies transformed Elizabeth’s life into something of a funeral dirge, while the higher notes made some words impossible to understand. Finally, though the games remained a strong point of the performance, having the stage manager walk across the stage to deliver props was distracting and broke the illusion of the show.

Overall texts&beheadings/ElizabethR was an experimental piece; Coonrod took risks in order to push the boundaries of what may be expected at Folger. As Dramaturg Michele Osherow writes, “Elizabeth was hard to pin down, fluctuating, as it suited her, between self-described innocence and experience, meekness and muscle; she referred to herself using both masculine and feminine pronouns.”

Despite the complications in its execution, it is important to note texts&beheadings/ElizabethR captures the depth of Elizabeth’s story in an interesting new light: the fractured light of Coonrod’s kaleidoscope.

Running Time: 1 hr with no intermission.

The show is playing at Folger Theatre through October 4th as a part of the 2015 Women’s Voices Theater Festival. For ticket information please call 202-544-7077 or click here.