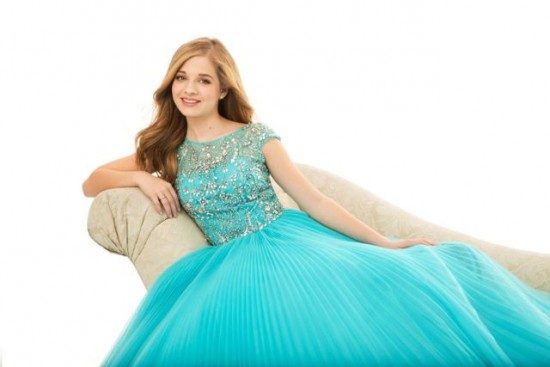 Classical crossover artist Jackie Evancho is on tour singing songs from her third studio album, Awakening.  “I’m excited about it,” Jackie says. “Tours equal tour bus, and tour bus equals fun!” It was indeed a fun atmosphere on October 10th at the Music Center at Strathmore in North Bethesda, MD where she attracted an enthusiastic crowd.

Before the concert, I had the pleasure of meeting with members of the Jackie Evancho Fan Club Gathering.  Three hours before the concert we met by the Prelude Cafe located on the Gazette Promenade inside the Music Center at Strathmore.

…she has an unquestionably gifted voice…

Club member Karl Turban gave me a button with Jackie’s picture on it to make me fit in with the rest of the group who were all wearing buttons.  Some wore multiple buttons featuring pictures they took with Jackie at previous meet and greets. In fact, members of this group got to meet Jackie before her performance at the Strathmore where she was presented with a picture by artist David Espinoza.  The picture features a large replica of a postage stamp with Jackie holding a microphone.  Upon receipt of the picture, Jackie was overwhelmed with joy and was very thankful and grateful to the artist and her fans.

Many of her die-hard fans travel all over the United States and even the world to see her perform live.  The number of times the club members have seen her in person range from 8 to over 50 times! This is only my second time seeing her perform, so I am a rookie!

The fans also let me know how Jackie has touched each of their lives.  What I learned in summary is that Jackie gives them all hope, not only because she has an unquestionably gifted voice but because of her pure heart. 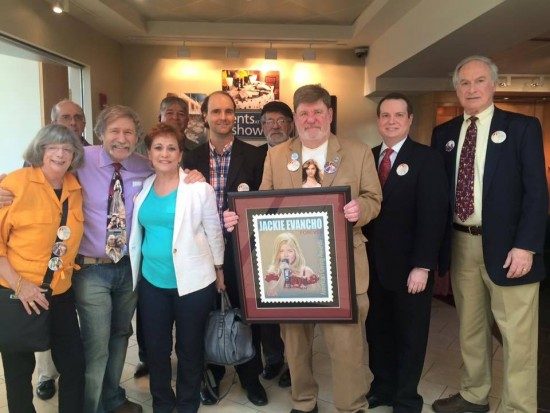 One example of her pure heart occurred just a few days prior on October 8th, where Jackie donated her time to perform a few songs at the LymeFreeWorld Gala.  Jackie revealed that her mother suffers every day with Lyme disease.   David Foster and Jackie performed “The Prayer” at the gala, giving hope to all who suffer from the disease and the families that it affects.  At the concert at Strathmore, Jackie dedicated the song “The Impossible Dream” to her mother, encouraging her to not give up, even though she has Lyme disease.

I last saw Jackie Evancho perform live with the world-class Baltimore Symphony Orchestra led by conductor John Mario with her ‘Songs of the Silver Screen Tour’ in 2013.

Since then, Jackie has continued to nurture her gift for music, all while attending a public high school in her hometown of Pittsburgh, PA.

Now age 15, at this concert Jackie sang a selection of songs from all of her albums including her latest, Awakening.

Appropriately entitled Awakening, the music from this album extends her stylistic reach with some contemporary song choices mixed in with the classical-crossover style of compositions that have made her known world-wide. Evancho relays that there were “no limits” thematically or otherwise on the songs that she and Sony Music Masterworks imprint, Portrait placed on repertoire, distinguishing Awakening from her previous two albums.

The song choices at the concert ranged from movies and musical theatre to hymns and arias.  A highlight from the evening included the popular musical theatre piece “The Music of the Night” from Andrew Lloyd Webber’s Phantom of the Opera.  “That’s how it started for me,” says Evancho. “When I first saw the Phantom movie I was inspired by the way the actors sang and really wanted to try to sing like that too. Their passion must have got to me!”

The audience favorite of the evening was “Nessun Dorma.”  Jackie thoughtfully dedicated this aria from Puccini’s opera Turandot to her parents whose anniversary was that day.  The high note on the last Vincerò (“I will be victorious”), which is the concluding cry of the aria, was exquisite sending the audience to their feet with a well-deserved standing-ovation.

Throughout the evening, Music Director and pianist Peter Kiesewalter, wearing black jeans and white shoes, led the live 12 piece string section.  A computer with recorded instruments such as drums, harp, horns, and guitar filled in the rest of the accompaniment.

When I go to a concert at a place as prestigious as the Music Center at Strathmore, I expect ALL of the music to be LIVE.  Recorded or fabricated “digital enhancements” are unacceptable. An artist such as Jackie Evancho deserves better, and so does the audience who paid anywhere from $48 to $115 per seat.  It was very odd hearing a guitar solo coming from the speakers when no guitar could be seen on the stage, only strings and a piano.  The excuse of lack of budget doesn’t fly with me considering they had 12 live strings.  The musical arrangements and orchestra, for example, could have been made to instead include 4 strings, 2 brass, 2 woodwinds, a guitar, percussion, drums, and harp.

Though a portion of the orchestra was fabricated, Jackie Evancho’s voice was not. Unlike some of today’s performers who rely on Auto-Tune, an audio processor used for correcting pitch, Jackie Evancho’s pitch perfect singing voice is all real, yet so unbelievable.  This is because she has many of the vocal qualities of a well-seasoned woman in her late 20’s.

Throughout the evening Jackie didn’t hold back in letting her fans know how much she loves and appreciates them.  In fact, the French song “Je t’aime” was dedicated to them, and the audience loved her back for it.

At the end of the day let’s not forget that Jackie Evancho is only 15 and has a long career ahead of her.  Whatever she decides to do I know she will be successful because of her good spirit, supportive family and friends, and of course her dedicated fans.

Jackie Evancho played for one night only at the Music Center at Strathmore – 10701 Rockville Pike in North Bethesda on October 10, 2015. For information about upcoming events at Strathmore, visit online.