Theatre Review: ‘9 to 5: The Musical’ by Silhouette Stages at Slayton House 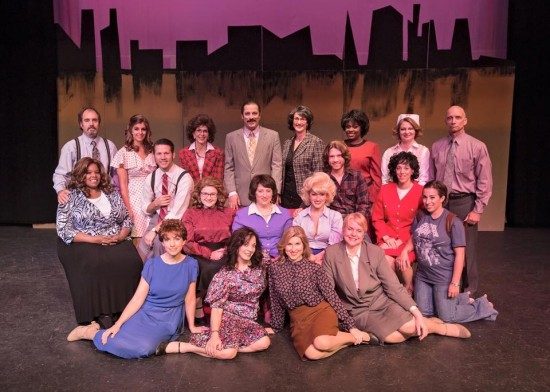 The Cast of ‘9 to 5’ at Silhouette Stages. Photo by Scott Kramer.

As most of the theatre aficionados from the Washington area already know, there are over 50 plays written by female playwrights being performed in the DC area this fall with the Women’s Voices Theater Festival. It is all about empowering women in theatre by having their voices heard, since they are woefully out of sync with how many plays written by women actually get performed and even fewer get to places like Broadway. And while there might not be actual data as to how many actors vs. actresses are employed, regional theater still knows all too well, that most plays performed today are written for actors not actresses and there are more actresses wanting to act.

Silhouette Stages choice to produce 9 to 5:  The Musical this season was brilliant. It is a show about empowering women, which focuses on the fact that although many women are smart, and educated they were often and still are being overlooked in the workplace. This is more than evident in theater, in which plays are chosen to be performed, and the characters on and around the stage.

This show takes on everything from salary discrepancies to the good ole boy network and sexual harassment, dating out of your decade, fine for men, not so cool for women. 9 to 5: The Musical is a joyful celebration using a dominant female cast, with some great men sprinkled in for eye candy. Musically directed by the always charming, always on the beat Matthew Henry Frieswyk. This local production has a sizable orchestra and it is masterfully conducted by the vivacious Tania Rosa Bindhoff! 9 to 5: The Musical is brought to life through the fabulous music and Lyrics of Dolly Parton but it is Kevin James Logan direction that pulls all the talents together.

9 to 5: The Musical is based on the 1980’s movie starring Dolly Parton, Jane Fonda, Lily Tomlin and Dabney Coleman, book by Patricia Resnick. Talk about an often under credited brains, Dolly Parton is one of the great talents and beauties of our times. Those of you who think that Taylor Swift invented break up songs, better run, and not walk to the Silhouette Stages to see this show about overcoming obstacles through resourcefulness and friendship and empowering women.

In the show’s signature song “9 to 5,” the cast complains about corporate life, unbending and uninspiring. Beginning with Judy, played by Caitlin Grant, a newly divorced woman who has never held a job outside the home, finds herself working under the leering eyes of Franklin Hart, Jr. played by Richard Greenslit, President and chief male chauvinist pig. And while I enjoyed Mr. Greenslit’s portrayal of this creature very much, his character was played so incredibly well, his voice so silky slimy, his intentions so disturbing, that I just don’t want to talk about him any more! Except to say that I loved the garage door opener made by “CRAFTWOMAN” which was used to…

While the bespectacled Ms. Grant may look like a frumpy housewife, it is readily understood that she is loyal friend, hard worker, but most importantly she has a fabulous set of musical pipes and she isn’t afraid to use them. Veteran actress, Robyn Bloom, plays Violet the heir apparent to a company who needs to appease and show deference to Mr. Hart in order to possibly get promoted. She takes Judy under her wing, warning her of course about Mr. Hart’s sexy secretary who the entire office loathes believes is “doing the boss.” Ms. Bloom shows that she is not just a pretty voice and a commanding actress, this lady can tap dance too!

As the entire female ensemble takes to the dance floor in the song, “One of the Boys,” it demonstrates the brilliance of choreographer, Tina DeSimone. She has created dance numbers that bring together fantastic dancing while leaving these actresses enough air in their lungs so they can still sing. Robyn Bloom is the whole package, golden voice, and an energetic time step. Speaking of well wrapped packages, Lucy Bobbin plays sexy, sweet and smart Doralee Rhodes, the part that Dolly Parton played in the movie.  Endowed with a curvaceous body, and dressed in many tight skimpy outfits, may have been what the leering men may have enjoyed, however it was not even what made us admire Ms. Bobbin most. That little vixen can act and sing and dance with a sweet southern drawl and western dancing and in “Backwoods Barbie” she let’s the audience know that she isn’t just a pretty face, she has the vocals, the dance steps and beware men, she is good with a gun!

The women on this stage are locked and loaded and ain’t taken “nothing from no one.” When the Violet, Judy and Doralee sing together are absolutely pitch perfect and the harmonies are wonderful. But hold the door, Roz a middle-aged secretary played by Maribeth Vogel has a scene stealing number with “Heart to Hart.” As Mr. Hart’s eyes and ears of the company, she is a snitty little tattle tale and a woman desperately in love/lust with her boss. Climbing seductively all over the desks at her age, singing a tribute of love and devotion to her boss who has absolutely no interest in her was uproariously hilarious. Dressed and shown to be the opposite of our sexy Doralee, Roz is a woman who appears so prim and proper, but poor thing, she has a lot of pent up lust in her loins and a song in her heart!

Speaking of double standards, 9 to 5: The Musical touches on one of the most flagrant imbalances of the modern world. Why men can date women half their age, but women can’t or at least don’t? In “Let Love Grow,” Joe played by the golden throated baritone wonder, Nathan Moe, shakes up our Violet by continuing to ask her out, although she is 20+ years older.

Costumer Sharon Byrd creates mischief with the outfits that the mostly female cast adorns. Low cut and sexy while still having to dance and sing is not an easy combination. Lighting designer Bob Frank flawlessly illuminates the stage, and while lighting designers might be one of the least celebrated parts to putting on a musical, next time you see a production, take note of the perfect lighting and spotlights.  The show would lose a level of sophistication without it.

So take your spouse, your boss, your kids and your parents out to see an absolutely charming, hilarious show.

Running Time: 2 hours and 15 minutes, with an intermission.