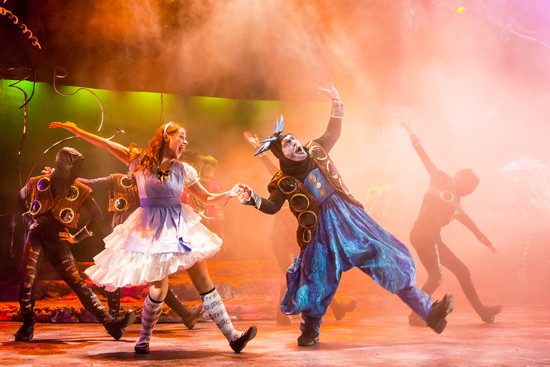 Kathy Gordon as Alice and Vato Tsikurishvili as Caterpillar. Photo by Johnny Shryock.

Alice in Wonderland, now playing at Synetic Theater under the direction of Paata Tsikurishvili, is truly a sight to behold. The playful, bizarre story audiences are familiar with is all there, with darker notes accented and drawn out. Sweeping and spectacular in scope and artistry, the production was an enjoyable and mildly upsetting rendition of Alice, resonating more with the 2010 film version starring Johnny Depp than the Disney original.

…a veritable buffet of sensual delight…masterfully mystical and nearly hypnotic…

Breaking with the theater’s tradition, this production of Alice in Wonderland actually included dialogue between the characters. Alice, played by Kathy Gordon, meets her stern new governess, who promptly makes off with both Alice’s toys and tarts. Fitfully falling to sleep, Alice tumbles into a dark, distressing, and almost devious world full of oddly familiar miscreants and disturbing realities. Forced to navigate this tangled world (literally tangled, with the malevolent trappings of trees and other half-alive stage sets and prop pieces moving about the space), Alice must grow from an insecure and easily silenced child into a young woman who can stand up for herself and those around her in spite of apparent dangers.

Cheshire Cat is delightfully played by Alex Mills, and once again the clever and vibrant imagination of Synetic Theatre pulls through to create not only the famous fictitious feline in whole, but also the vanishing smile alone. Tori Bertocci played the dual roles of the White Rabbit and Alice’s mother. Her personalization of the time-racing rabbit was certainly amusing, though her costume may have erred a little on the side of Playboy-bunny. Dallas Tolentino gave the Mad Hatter a new groove with a physical play on words, as he and the March Hare (Justin J. Bell) and the Dormouse (Zana Gankhuyag) played the motley crew in a rivetingly robotic manner.

Synetic Theatre has produced yet another wonderfully vivid and immensely imaginative piece with this rendition of Alice in Wonderland. The spectacular and unsettling set left nothing to be desired and the movements paced out by the actors was wonderfully timed and spot on as it vacillated appropriately between fluid and frozen motions by the characters. Even the colour schematics were magical; the scene with the Caterpillar (Vato Tsikurishvili) being particularly entrancing as both the Caterpillar and Alice morphed into something new, beyond, and nearly mythical amidst a rainbow of perfectly presented colour and emotion. Costumes, light, and sound added to the set and movement to create a veritable buffet of sensual delight.

The choice of Synetic to include dialogue in this production is debatable; with their wonderful ability to speak through motion and imagery, the play could probably have been presented as well, if not better, minus the addition of dialogue. Gordon’s presentation of Alice, with many high-pitched giggles and overly assumed child-voice certainly play into that thought. At first, it was a little hard to see her as a child and not as an adult trying too hard to play a child, but by the scene with the Caterpillar she settled more naturally into the youthful age.

Overall, Alice in Wonderland is masterfully mystical and nearly hypnotic; certainly a production that should not be missed this theatre season. I’m ready to pick up another set of tickets and go see it again.

Alice in Wonderland is part of Women’s Voices Theater Festival and is playing at Synetic Theater through November 8, 2015. Click here for tickets or the box office at 1800 S. Bell St, Crystal City.