Theatre Review: ‘As One’ presented by UrbanArias at The Atlas Performing Arts Center 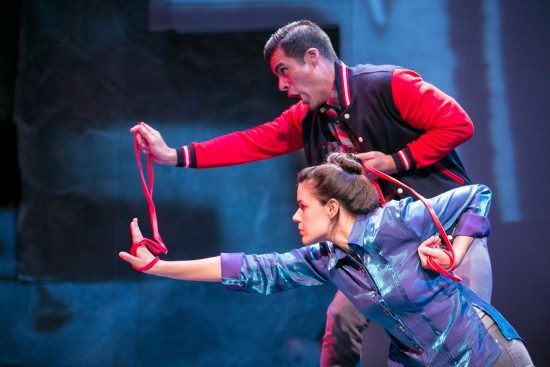 What could be more compelling than watching a man look into a mirror, and see a woman looking back? UrbanArias’ As One –a contemporary opera offering heartfelt, and at times, comedic, vignettes into one brave woman’s growth and development –is at once hypnotic and arresting.

The opera, written by an award-winning team – Laura Kaminsky, Mark Campbell and Kimberly Reed – chronicles the life of Hannah, played by Luis Alejandro Orozco (young Hannah, before the transition) and Ashley Cutright (Hannah after the transition), a transgender woman striving to find peace within through embracing and integrating the truth of herself.

Orozco and Cutright deliver riveting vocals and exemplary presence on a minimalistic, yet nostalgic set—six chairs creatively re-arranged as needed; a partial, blank, white shadow-box –type house, and a piece of Plexiglas that acts as a mirror. Under the direction of Octavio Cardenas, the two stars playfully make great use of both stage and energetic space—it seemed the theatre condensed and expanded with Hannah’s journey.

Just as Hannah integrates and expands through struggles to belong, adjust and embody her truth, the entire production becomes an organism unto itself, living and breathing an almost-primal groan that speaks to the need—and right—of every soul to live truthfully and freely in one’s skin.

Black and white images flash on plain white backgrounds: neighborhoods; little boys marching like toy soldiers in lines; reproductive organs; Norwegian fields. These backdrops add to the dimension and mood of one soul’s laments about being alienated from self in a world that habitually links gender to sex.

As the 4-member, Inscape Chamber Orchestra played under the thoughtful direction of Robert Wood, I could feel the colored, multi-dimensional dynamics Hannah experienced: it’s the HUMAN experience. The dissolution and congealing of a psyche, resonating and cycling like a pulse. As Orozco and Cutright dance around, between and with one another, reflecting Hannah’s changes, I felt drawn into Hannah’s community of self.

Paradoxically, As One speaks to the universality of alienation and discrimination along a soul’s journey. The journey to self-realization is at once a great dare in a world of strangling constructs AND a true test of Darwin’s survival-of-the-fittest theory: only the strong make it out “as one” within themselves, and with a world that may or may not perceive and reciprocate the truth of that inherent interconnection. The price of this dare has been death for many, a fact to which this presentation poignantly pays homage.

Quoting a John Donne poem, young Hannah (Orozco) repeats methodically, after her teacher: “No man is an island, entire of itself…” and then exclaims, “BUT I AM AN ISLAND UNTO MYSELF!” The entire production rides this ebb and flow between external assertions and internal experience, illusory projection and introspective reflection, longing for the space to be understood versus creating the space to just be. In the end, Hannah (Cutright) discovers the key to her happiness, “Nature doesn’t work in metaphors: it just is…I don’t write like a girl or a boy, I write like ME.”

Orozco shines as young, conflicted pre-transition Hannah. His dancer-like physique and classically trained movements accentuate Hannah’s delicacy, while his voice adds a rich dimension to the very real struggles of an embodied contradiction. However, Cutright really stands out in dynamism. Her embodiment of Hannah’s highs and lows were evident in visceral body movements, timely intonations and seamless transitions between emotional highs and lows.

The two have an on-stage chemistry that render them virtually inseparable, and a cohesive unit that is Hannah.

Exquisite musical arrangements, witty lines and top-notch talent combine to create a true, multi-arts gem. What may appear to be a simple commentary on the struggles of transgender persons in a world fearful of “blurred lines,” becomes a transcendent statement of humanity, and a resounding pronouncement that when we just are there are no lines.

This production is subtly brilliant in its assertions, while paying just homage to the ones that dare to cross the bridge from definition to presence. Unapologetic. Inexplicable. Courageous.

Advisory: For mature audiences, not just in age, but also mature in mind and open in heart.

UrbanArias’ As One will be playing at Atlas Performing Arts Center in Washington, DC, October 3rd through the 10th 2015 . For more information, click here .