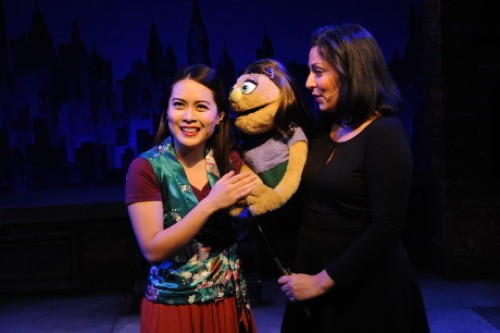 Can you tell me how to get, how to get to T and 14th? Until November 22nd, Source Theatre in NW D.C. will be hosting Constellation Theatre Company’s Avenue Q, a coming-of-age story featuring rod and hand puppets as well as actors. Conceived in the early 2000s by Robert Lopez and Jeff Marx, this hilariously outrageous musical is a disillusioned interpretation of Sesame Street.

…the performers kept the audience laughing audibly and eager for more.

Fresh out of undergrad, Princeton (Matt Dewbery) moves to New York to get a job and find his purpose! However, life’s hard for an unemployed English major who can’t pay his rent. Thankfully, Princeton finds a place of his own on Avenue Q, a rundown neighborhood full of misfits. Joined by a motley cast of characters from the Bad Idea Bears (Jenna Berk and Christian Montgomery) to Trekkie Monster (Vaughn Middler), Princeton navigates life, relationships, and the growing horror of adulthood.

The detailed work of Avenue Q’s creative team livened the show and complemented the high-energy acting. The set and light design (A.J. Guban) maintained an authentic, yet cartoonish New York vibe perfect for this Sesame Street gone wrong. Dilapidated brownstones lined the stage and a cityscape screen hid the band. The windows all opened and the lights faded in and out smoothly to emphasize different parts of the set. The puppet design (Rick Lyon) was phenomenal—especially when props unexpectedly morphed into puppets—and allowed the actors to further develop their puppet characters.

The most notable part of the performance was the amazing music. Songs like “If You Were Gay,” “Everyone’s a Little Bit Racist,” and “The Internet is for Porn” riff off of child-friendly puppet show tunes while maintaining distinctly adult humor. On the whole, the actors had impressive vocal ranges and powerful voices, but Eben K. Logan (Gary Coleman), Emily Zickler (Lucy the Slut/Mrs. Thistletwat), and Justine “Icy” Moral (Christmas Eve) were truly exceptional. During “Schadenfreude” the band was too loud and the singing too fast for me to hear the clever lyrics, and over the course of the musical a few belted notes came out like yells. Yet overall the music made the show with well-executed harmonies and a lively 6-person orchestra.

Avenue Q is both purposefully kitschy and exceedingly impious. Nothing is off limits in this hilarious show; it’s politically incorrect with a purpose. Constellation Theatre Company packed the house for opening night; the performers kept the audience laughing audibly and eager for more. So give them your money and get yourself to Source Theatre!

Running Time: 2 hours and 15 minutes with a 15-minute intermission.