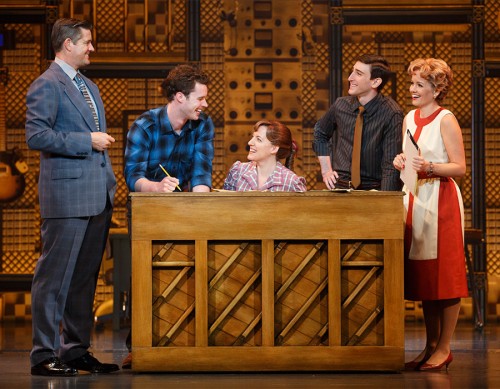 With as many hits as iconic 60s singer and lyricist Carole King had, one would think that Beautiful: The Carole King Musical would “chart” an easy path to success. It’s fun, likable and breezy, loaded smack dab with talent, especially the top shelf singing/dance ensemble. In short, a very entertaining evening. But the show falls short of reaching the well of emotional deepness that is the calling card for Carole, the voice of her generation.

Starting out is Carole, center stage behind her beloved piano, signature unkempt curly hair on display, reminiscing about her journey to the pinnacle of her career where she now stands. Flashback to 1964 as a 16-year-old Carole Klein, played by Abby Mueller, starts out on her musical career at the Brill building in Manhattan, the Mecca for music recording. Curiously, her sister played the role on Broadway in which she won a Tony for Best Actress/Musical.

It is a razor-thin plot (novella by Douglas McGrath) as Carole’s early life unfolds as a series of pixyish moments accentuated by snappy one liners that are reminiscent of Borscht Belt comedy of the era. Intrepid Carole gets in the biz, and soon meets her husband Gerry (an enervating Liam Tobin). Gerry Goffin became a celebrated composer and lyricist in his own right, and they have a series of hits and also an unexpected baby. Oops. Instant life collaboration.

It was a time when musicians were clamoring for songs that could be hits, in an ever growing race up the Billboard list. Aside from her personal collection was “Take Good Care of My Baby,” “Up On The Roof,” “Some Kind of Wonderful” and just so many more. Their contribution to the music vibe at that time was astounding.

Balanced with that is the work of their friends Cynthia Weil (spunky and sharp-tongued Becky Guvsvig), and Barry Mann (a wonderfully neurotic Ben Fankhauser) who are congenial rivals in the song making business.  Their on again off again romance provided a counterpoint to Gerry and Carole, yet felt a bit like an episode of The Dick van Dyke Show as it wore on.

The engaging aspect of Act I is watching the rival collaborating teams taking turns coming up with hit songs–and to our instant gratification, we see them performed by the outrageous stage talent that has been assembled. We see the Shirelles, Wayne Newton, The Righteous Brothers, and The Drifters but with much better movement. The Ed Sullivan variety hour broke out.

Mueller’s Carole is engaging and likable but is viewed as a victim until she takes control of her life, in this squeaky clean portrayal. As we watch Tobin’s portrayal of Gerry and his feelings of constraint at getting married so early, as well as his dalliances and hints of drug use that lead to a slow corrosion of their marriage and their musical partnership, we are affected, but it has nowhere to go. Though slickly packaged with fine technical aspects, we never felt a tangible feeling of connection onstage. Tobin was a strong stage presence and a soaring, effortless voice for a lyricist!

In Act II, Carole moves to LA to perform solo and create her personal music. No mention of James Taylor, or her experiences in La La land, which would have been informative. Interestingly, the show leaves us as Carole is at the pinnacle of her career, the chart-topping, record smashing Tapestry album making her the top performer in America. At Carnegie Hall she gives us her fabled ‘Beautiful’ yet we learn little else beyond this high point in her life.

As a vehicle for a greatest hits showcase, this Bio-musical is functional. But the magic and power of Carole King’s voice cannot adequately be presented or even described in technical musical terms. What made her resonate at a performer was her achingly honest ballads that were simple yet infused with the power of her own emotions.