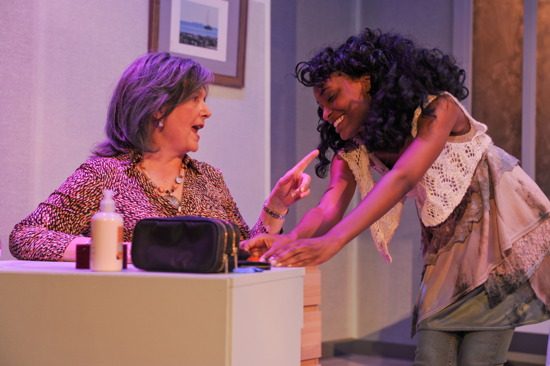 The setting of Christine Evans’s Can’t Complain, now playing at Spooky Action Theater and is part of the Women’s Voices Theater Festival, can be unnerving to anyone who has spent a significant amount of time in hospitals. The resemblance, right down to the inoffensive blue of the walls and the tile floor, is uncanny. The nightstands and beds look like something out of an Ikea catalogue. Luciana Stecconi’s set design is, in fact, so effective that from the first moments of the play it is easy to understand why someone might go mad here–and interesting to watch how Rita (Cornelia Hart) succeeds.

…it is fascinating to watch this story unfold.

Can’t Complain is ostensibly the story of Rita, who is stuck in a hospital room awaiting tests after a stroke. Her roommate is the brilliantly demented Iris (Wendy Wilmer), a decrepit Irishwoman who seems to appear and disappear at will. During the day, her only visitors are her frazzled daughter Maureen (Tonya Beckman), a nurse named Lorraine (Nicole Ruthmarie), and a mysterious figure listed in the program only as the Man in Blue (Eric M. Messner). Her granddaughter Jansis, also played by Ruthmarie, seemingly only visits in short fantasy sequences, dressed like a wood sprite.

This play is at times confusing or disturbing, coming as it does from the perspective of Rita’s confused mind. It is, in its own way, a view of grief and uncertainty through the eyes of the dementia–as the show progresses, and Rita sinks deeper and deeper into her own mind (and a strong fixation on her small tuxedo cat Sooty), the world around her becomes stranger. Darker.

The Man in Blue, originally a somewhat cheery figure in his first appearance, becomes more sinister–Messner becomes something like the embodiment of an intrusive thought, ruthless and uncanny. As Maureen, Beckman is fantastic at the mix of resentment and familial loyalty required for the role, and the progression is such that, when Rita and Maureen are reunited in grief near the end of the play, it is perfectly believable and virtually heartbreaking.

While parts of Can’t Complain may be confusing, director Michael Boom has succeeded in creating a subtle and emotionally effective production. Unsettling as it is, it is fascinating to watch this story unfold.