Theatre Review: ‘Carousel’ at Maryland Hall for the Performing Arts 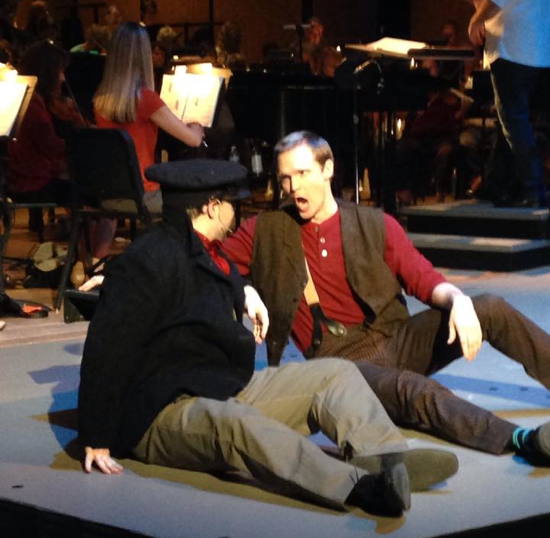 For two performances only, the Annapolis Chorale and a stage full of talented soloists graced Maryland Hall presenting Rogers and Hammerstein’s 1945 production of Carousel. The leads are costumed in festive garb, lightly checkered sundresses and hats on stage brightened the austere set. The 1945 work was adapted from 1909 from Ferenc Molnár’s play Liliom and was only Rogers and Hammerstein’s second collaboration after the amazing success of Oklahoma. Directed by Courtnet Kalbacker, I am constantly reminded by local productions that Annapolis has some of the greatest talent right here.

Directing a show with no set design and minimal room for movement, takes artistic and cunning to the next level. I must apologize to my reading audience, but although I knew most of the songs of Carousel, I never had actually seen the show until last Friday night. Which brings me to my thought du jour, and the reason I adore theater, is that once you have put a song into the context of a show, whenever you hear it in the future, you can rerun the stage performance in your memory. While I may have heard, “If I Loved You,” “June is Busting Out All Over,” “My Man Bill” and “You Never Walk Alone,” I never understood it to be part of something bigger than itself. They were simply lovely songs, sung by amazing singers.

Directed by Courtnet Kalbacker, I am constantly reminded by local productions that Annapolis has some of the greatest talent right here.

This is also the first production I have seen at Maryland Hall since its major renovation. While there are still a few panels out of place, the acoustics were notably enhanced. We are so fortunate in our city to have a conductor like our very own J. Ernest Green. Maestro Green is indeed a National sensation and has played to New York and Washington, Europe, and South America, but he delights in bringing audiences everything from classical, opera and theater to our small, but culturally demanding community.

And oh my can he bring talent together. The orchestra was flawless. Having little time to rehearse, and few hours to work, I am constantly in awe of our Annapolis Orchestra. I have delighted in watching Maestro Green over the last 30 years, and he continues to bring in the pinnacle of talent together to Annapolis. This delightful semi staged production brings musical joy to patrons, while creating a full-scale show using few props and no scenery changes whatsoever. He is well-known for “pushing the boundaries of the concert hall.” And although he, in 2012, received Anne Arundel County’s Lifetime Achievement award, I would say he is still young enough to fit another lifetime of achievement into his future.

Carousel is based around the not so prolific life of an under achieving, unambitious Carousel barker named Billy Bigelow, played by the handsome and talented Jason Buckwalter, whose romance threatens both his and his love interest and later his wife, Julie Jordan, jobs. Mrs. Mullen, played by one of Annapolis’ finest actresses and vocalists, Alicia Sweeney, is the owner of the Carousel and seems to have a romantic interest in young Mr. Bigelow and is becoming increasingly jealous of his flirtation with Julie Jordan, played by the tall, graceful and lovely Jessica Satava.

Ms. Satava has both the stature and strong vocals to properly portray this independent, yet doomed by love, young woman. Set in the post World War II era, both the lyrics and formality of language and reputation, charm the modern audience. While it briefly touches on domestic abuse, it does so in a way that the audience still remains somewhat sympathetic to Billy Bigelow. Partly because the community condemns the abuse, the love felt by Julie Jordan is so pure and selfless, and that she and she alone, understands that he is doing the best he can. It is just that it isn’t going so well. In looking at the Billy Bigelow character, and understanding that this show was written post World War II, in essence Billy may well represent the war hero returning and the traumatic young man of the times.

It is clear that love can’t conquer all, however the clear dulcet voices of our lovers, and the fresh and memorable lyrics and tunes they sing, make us forget their short comings and understand they too are just human. And while Ms. Jordan represented the angelic figure in Billy Bigelow’s life, there is often a power that represents the devil. Erik Alexis plays Jigger Craigin, a ne’er-do-well of a scoundrel getting our Billy Bigelow in trouble with the law, ultimately causing him to do the unthinkable. Mr. Alexis plays the unkempt swarthy character so convincingly, that you know that he could easily have a long incredibly successful career of being typecast as some sort of evil incarnate. Also in the town, the wise Dr. Selden played by the rich baritone, Ray Landrum, helps the community heal and is a kind of narrator to our plot.

Petite Carrie Pipperidge, played by soprano Kimberly Christie, to me was reminiscent of a young Kristin Chenoweth. Although the staging was simple, her crisp smooth voice exemplified youth and exuberance. The love interest to our Ms. Pipperidge, was the suave older man Enoch Snow, played by J. Austin Bitner. A full baritone voice Mr. Bitner, represented the sophisticated and powerful wealthy man, caring about social standing and reputation above all else.

Nettie Fowler, played by Molly Moore Green, had some of the best musical numbers of the show. Starting with “June is Busting Out All Over,” it is our first moments which we can see how a chorus of this size and talent will be utilized along with the leads. Ms. Greens voice and diction was rich, mature and voluptuous and the chorus made the energy that much more impactful and gregarious. When towards the show’s conclusion, Ms. Green sings “You’ll Never Walk Alone,” she brings a connection to the situation that is both memorable and timeless in its message.

For this show is not a slap happy Oklahoma feeling show. It has a sad haunting ending, which needs help to be lifted for the audience’s acceptance of the truth. That as long as there are people that we influence in a positive way, that you never are alone. She tries to teach this to Louise Bigelow, daughter of the town bum, embarrassed at her parentage, Gracie Albus dances beautifully on stage, her youthful carefree demeanor threatened by being constantly tormented by her peers. “You’ll Never Walk Alone” speaks to the next generation, the sins of the father do not dictate the outcome of the future. Two days later, I still haven’t been able to get that song out of my head, I blame Ms. Green!

Rodgers & Hammerstein’s Carousel, presented by Live Arts Maryland, had two shows only, October 9 and 10, 2015 at Maryland Hall for the Creative Arts – 801 Chase Street, in Annapolis, MD. For more information about other shows with the Annapolis Chorale click here.