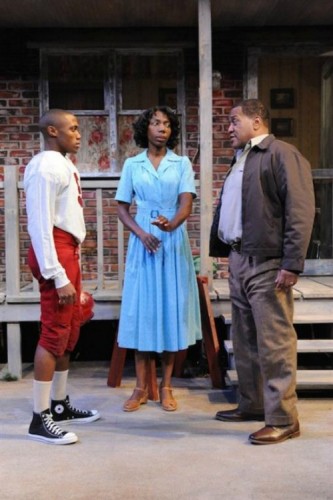 Friday night. Everyman Theatre. The air is filled with soft exclamations about the set, and, indeed, it is breathtaking. From the lobby to the stage, there is a palpable buzz of great expectation. The show is undoubtedly sold out, and the theatre is filled to capacity.  It’s opening night for Fences, August Wilson’s timeless, award-winning tale of raw human spirit, and the delicate dance between life and death, hope and possibility, fear and love.

Director, Clinton Turner Davis, in partnership with a stellar cast, supersedes any expectation for a “good production,” to deliver a vortex of a theatrical experience.

Turner’s directional debut is brilliant. The cast is not only fully committed to the story, but also meticulously sensitive to their respective characters: they allow the art to breathe them. Troy Maxson, brilliantly channeled by Alan Bomar Jones, is a garbage man, but most importantly, he is a man with shattered hopes and dreams, doing his best to make a beautiful mosaic out of the broken pieces.

In his attempts to fulfill his duties to his devoted wife, Rose (Joy Jones), two sons, Lyons and Cory (Gary-Kayi Fletcher and Brayden Simpson, respectively), and brother, Gabriel (flawlessly played by Bryant Bentley) – who cryptically evokes the currents of tension underlying the obvious–he sometimes lets the shards of his past “cut” his loved ones.

Rose (Joy Jones), in speaking compassionately about her husband’s ways says, “And sometimes when he took me in his arms he cut.”

No one feels this cut deeper, perhaps, than his youngest son, Cory (Simpson), who internalizes and rebels against his father’s discipline when winning his approval proves unfruitful. Bono (Mason B. McIntosh), Troy’s faithful friend, adds a smoothness to the stew of life, always reminding Troy of the best parts of himself, but after a series of small concessions lead to a climactic chain of events, everyone is affected.

The political, social, humanistic, spiritual and relational themes coursing through this piece are the arteries and veins animating this classic body of work. Yet, the chemistry between the cast members—as well as Troy’s witty, impromptu response to a cell phone ringing in the middle of a pivotal scene—reign supreme in making this piece exemplary.

James Fouchard’s set design is hands-down, impeccably executed. The brick-faced home and front porch are skillfully clad with props (Jillian Mathews) that assist the cast in fleshing out their roles. The audience seemed mesmerized from the beginning to end, laughing heartily with the characters’ joys and mannerisms, and unconsciously suspending applause at the close of arresting scenes: held captive by the believable and passionate delivery. Nancy Schertler’s lighting design helps to set the moods, which flowed from effervescent gaiety to devastation effortlessly.

This production is a topic for discussion, with innumerable avenues to explore, surely pleasing to the most refined of theatrical palates. Lovers of raw human emotion and newbies alike can enjoy the captivation of sheer artistry. If you want to go beyond entertainment, and be engaged fully, make your way to Everyman Theatre. You will not leave the way you came.

Running Time: Approximately 2 hours and 40 minutes with a 15-minute intermission.

Advisory: Recommended for mature audiences due to adult content and themes explored.