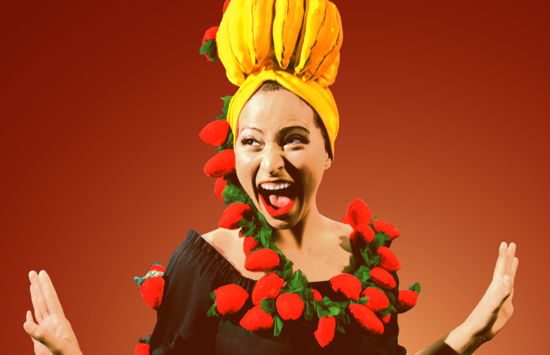 As most of the theatre aficionados from the Washington DC area already know, there are over 50 plays written by female playwrights being performed in the DC area this fall with the Women’s Voices Theater Festival. In a very small theater, on a cool October evening, I got to witness a shooting star. As life sometimes imitates theater, so too does Gimme A Band, Gimme A Banana! The Carmen Miranda Story, starring Sharalys Silva.

The life of Carmen Miranda is elegantly portrayed through the co-playwrights Ms. Mel Bieler and Patti Kalil’s, words, music, costume and dance. Like so much theater, I came out of the show more educated than when I went in, as for starters, I did not know that Carmen Miranda was at one time the highest paid female entertainer in the United States.

…Pointless Theatre Company has a distinctive art of theater production.

Carmen Miranda lived large, but certainly not long (1909-1955) born in Portugal, her parents moved to Rio de Janeiro, Brazil where she was the country’s little darling. Carmen Miranda attended music school and was a club dancer in Brazil for many years before she came to the USA. She was known mostly for her exotic hats, introducing her sexy Samba dance moves to the USA, and my only recollection of her was that she sang the Chiquita Banana song that everyone knew. The story begins in Rio, where Carmen is working in a club, she is dazzling and catches the eye of Lee Schubert, a Hollywood insider, played by Scott Whalen.

Silva makes her United States debut in this show, she is from Puerto Rico, but her Portuguese is excellent! She gives a dazzling performance channeling the energy and attitude of the real Carmen Miranda. She has an absolutely perfect Latin figure, slim, curvaceous and she can Salsa and Samba, a requirement of all South Americans but especially true in Brazil. You simply cannot look at her young exuberant face and not smile back at her. Ms. Silva, like Ms. Miranda obviously loved entertaining, and people, as the show continues it is Ms. Silva’s acting skills, as remember, little English is used, and the story is still elegantly understood.

The play shows that when she returns, singing in both English and Portuguese she has angered the sensitive people of Brazil. Singing “South American Way,” Ms. Silva has the outfits, the dance, and the gestures to speak, without saying a word. There is little dialog, however a few times during the show, a narrator will chime in with what is going on to keep the audience straight. We learn from the narrator, and the playwrights found this in historical documentation, that a Brazilian commentator criticizes her selling out and becoming too Americana. They see her as a traitor, leaving them for fame and fortune and forgetting her roots, her people, her country. Carmen Miranda called the Brazilian Bombshell, enjoyed the limelight however in later life, it is mentioned that she didn’t love the image that Hollywood had her promote as a modern Latin woman. The line “I put the hip” in hypnotize, sums up a great female samba dancer. We hear “Something for the Boys” and “The Lady in the Tutti Frutti Hat.” And I challenge anyone to go to this show and not find themselves moving a little bit sexier for days!

Besides being a show that rarely utters an English word, the Pointless Theatre Company has a distinctive art of theater production. Known as master puppeteers, the use of life sized puppets in the shapes of birds, showing that Carmen was in Brazil, to the Pan Am airplane dancing across the stage with ease is a signature manner in which this company interprets a show. I must say that Mel Bieler and Patti Kalil (co-set and puppet designers) go truly Latin in the way the sets come together. They entertain us between sets much in the way that they would have done this in the 40s and 50s. The scene changes are graceful, and during a time that is obviously for a costume change or a set rearrangement, we have a gentleman samba dancer Aloysi, played by Phillip da Costa, in Carmen’s life, she insisted on bringing with her band leader and long time lover who eventually left her because of her career choice and feeling of neglect.

As the show progresses, you see through the movement and acting how her life continues, she marries David Sebastian and he is seen giving Carmen pills and alcohol. Eventually her sister comes and rescues her bringing her back to Brazil, but she leads a very short life, dying of a heart attack at the age of 46.

But back to our star, Sharalys Silva, an amazing entry to the acting world, this young actress will some day be on our silver screen, and you will be able to say that you saw her in the first show she was in when she arrived in the USA. Ms. Silva, you have the beauty, grace and charisma to be as successful as Ms. Miranda, I beg you to be careful so that you can have a long career and a longer life! I am a fan! Eu sou um grande admirador seu, boa sorte!

Advisory: Recommended for people of all ages, 8+ great for children.