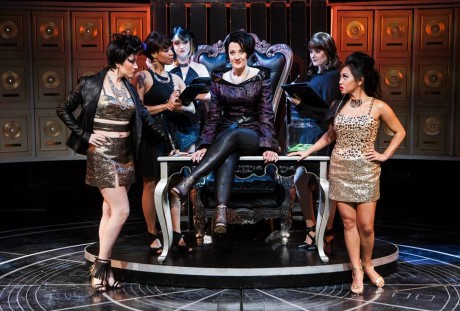 Signature Theatre has launched another new show, Girlstar; a modern fairytale with a broad musical range and a dark underbelly. Directed by Eric Schaeffer, with book and lyrics by Anton Dudley and music by Brian Feinstein, Girlstar is quite the production.

Promised to be a show where “The Voice meets Maleficent,” Girlstar has all the pizzaz–the lights, live orchestra, fantastic costuming, some fun special effects, and great actors. Unfortunately, what it doesn’t seem to have is a good book to pull from. Even Girlstar’s stellar cast couldn’t quite give the book the magic kiss of life.

Daniella Espere (Donna Migliaccio) runs a music production company and schemes of one day being queen of the music industry. Her evil plan for domination is realised in the form of her long-lost niece, Tina (Desi Oakley), who dreams of becoming a pop-star and will stop at nothing to get to the top. That, of course, is before she sees the obstacles standing in her way. These include her now-estranged Uncle Derek (Bobby Smith), the love-struck Jeff (Sam Edgerly), some serious competition, and more!

On the one hand, Girlstar is a highly entertaining production. If you can suspend your disbelief, squelch your questions, and just latch onto the over-the-top and delightfully outrageous costumes (nearly a character themselves) and special effects, then you can probably enjoy this as a feel good, magic-laced love story with dark notes, lots of great humour, and some pretty cool songs. It even manages to poke some fun at pop culture and throw some shade at people who sellout their family and friends, all while giving a nod to fairytales like The Princess and the Pea, Snow White, Alice in Wonderland, Rapunzel, The Little Mermaid, and more. What the songs lacked in lyrics, the actual music behind them was fun, emotive, and at times, utterly chilling. “Seal Your Fate” and “Music Everywhere” were personal favorites.

If you are looking for a show with more substance, no plot holes, lyrics and dialogue that are at least as sharp as the many stilettos styling on stage, and that plays less to the expected and overdone, then Girlstar will likely frustrate you. The problem lies not with a lack of premise; weaving a fairytale into the music industry has definite promise. But instead of fulfilling the promise and creating a killer musical, the production is more like a singing zombie–the story is left stumbling around with half a set of bones covered by a bloody, thin facade of flesh with a whole lot of holes.

Whether the show itself works or not, there is no question that the cast worked every bit of magic they could on the show. Migliaccio makes a great evil queen, and if I ever saw her walking in a Daniella Espere costume on the street, I would turn and run the other way (which does make me question the smarts of Oakley’s character, Tina). Oakley probably faced the greatest challenge of the cast in transforming Tina from a nobody to a popstar to–well, you’ll have to see for yourself–within the painful limits of the script, but her Tina was engaging and fun, and certainly had me cracking up when she broke out her “good” dance moves. Bobby Smith and Sam Edgerly must have had a challenge with their characters, too, as Uncle Derek spent a lot of quality time literally buried out of sight and Jeff was limited to a dictionary and a one-definition lovestruck tone, but they did a great job with what they had, and Edgerly’s Jeff was my personal favorite from the production.

Don’t be afraid to go see the show for yourself; just be prepared for a bit of whiplash and a questionable ending. Who knows–you might even love it!