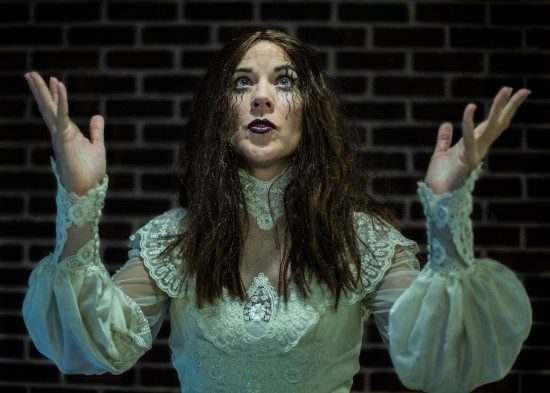 We walked down rickety paint splattered stairs into a tiny blackbox theatre. Six lengths of white fabric hung across the middle of the stage with Warhol-esque silhouettes blinking across them. At center stage lay a wooden box and an ominous pair of shovels. The creaking theatre chairs slowly filled with people and the lights dimmed. The scene was set for horror, namely Molotov Theatre Group’s Lovecraft: Nightmare Suite.

Molotov prides itself on celebrating and maintaining the Grand Guignol genre of horror featuring graphic scenes, an austere outlook on life, and psychological thrills. Lovecraft: Nightmare Suite uses 6 vignettes to explore fear and the famed writing of H.P. Lovecraft. From blood seeping through floorboards to shadows flickering down alleys, parts of the show will make you wonder if, as the Storyteller (Alex Zavistovich) claims, “It is best not to exist at all.”

The show was a little dry. While Molotov does focus on melodrama and stylistic work, the actual play was more about storytelling than acting. For the actors the storytelling aspect worked well; Elizabeth Darby’s vocal work as the Narrator in the second vignette was captivating–even her subtle puffs on her pipe sold her character to the audience. Darby also plays a convincing Landlady with a well-developed Spanish accent; she clearly dedicated herself entirely to her characters while still maintaining a measured acting approach. Each actor had a strong voice that carried the action, and the music (Gregory Thomas Martin) was good, but the show almost gave the impression that it would be better as a book on tape.

The lighting design (Leigh A. Mumford) incorporated a strategic use of shadows that worked very well, and the myriad of ways the sheets were used in the set design (Rachel Wallace) was very creative. However, the projections used for the set looked like a PowerPoint presentation and interfered with the lighting design by shining distorted images across the actors’ bodies. The projection of the cabin in the fourth vignette featured a composite of images that looked like cut and pasted clip art and the satanic and magical symbols shown between each scene made the set kitschy, not scary. As she did in the third and sixth vignettes, the designer should have stayed with the minimalistic eerie beauty of just her original sheets.

Overall, if you’re looking for a creepy show around Halloween, Lovecraft: Nightmare Suite could be your fix. However, it feels like a diluted version of Poe, a play made for an earlier age. Watching it was like watching The Exorcist and its outdated special effects: enough to make you shiver, but not shriek.

Advisory: The DC Arts Center is accessible only by a long flight of stairs. Some violence.