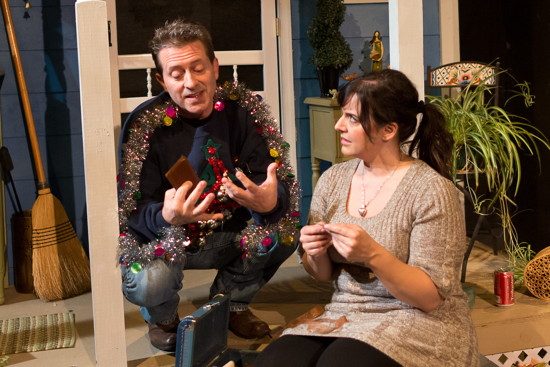 From the moment at the beginning of Maytag Virgin that Jack (William Hardy) casts interested—which quickly turn to adoring—eyes on his new neighbor, Lizzy (Gillian Shelly), we can guess what’s eventually going to happen. Oh, there are a few bumps along the way—plus the obligatory huge fight that kicks Jack in the shins but doesn’t discourage him—but we kind of know in the end these two lost and traumatized souls will find each other.

The inevitability of the fulfilling love story doesn’t make the journey any less enjoyable or moving—though Maytag Virgin is primarily a comedy–for viewers of the new play by Audrey Cefaly. The Alabama native (the play is set there) also directed the play’s world premiere at Quotidian Theatre Company as part of the fall 2015 Women’s Voices Theater Festival.

Aside from their individual appeal, the chemistry between the two actors is totally believable.

The audience at the October 4th production was so enthusiastic that applause began at the start of the intermission. (It probably helped that Cefaly was in attendance.)

Her writing is poetic at times, but very real always. Cefaly’s characters speak like everyday people but are nonetheless compelling, as they struggle to overcome the heartache of the past with courage they didn’t know they have. In Jack’s case, add his ability to see into the future with a confidence he didn’t know he had either.

There are also funny moments not related to romance –such as when Lizzy, who along with Jack is a teacher in the area public school, says: “it feels good to bang a locker.”

Cefaly’s direction incorporates both the physical set and the intimate—as the action and connection between the two characters are enhanced not only by their proximity as neighbors but the contrasting personalities their houses reflect.

Even their accents, while both Southern, are slightly different. As are their views about “outsiders.” Jack is freer, while Lizzy clings, at least a little, to prejudices against Catholics. It’s refreshing to have the topic of religious differences raised in a contemporary play with humor.

Cefaly couldn’t have done better with the casting. From the moment Shelly starts to babble out of habit but also nerves (upon meeting an attractive new neighbor), her performance embraces the many facets of Lizzy perfectly. She is both girlish and world weary, warm and off-putting, ebullient and terrified of a repetition of her loveless marriage (with serious consequences).

If possible, Hardy is even stronger. His Jack is also vulnerable, with his share of sorrow—caring for a long time for a dying love. But he sees something Lizzy can’t yet see about their serendipitous proximity. Both in his soothing and sometimes teasing way of speaking with her, his wordless expressions, and his wide-eyed looks, he portrays an incredibly attractive character many a woman would wish for.

Aside from their individual appeal, the chemistry between the two actors is totally believable.

Maytag Virgin gives comfort to any lonely hearts who believe he or she (it’s usually a she) cannot find love without changing to suit the other person. Lizzy may be “too much” for a lot of men—garrulous, emotional, self-effacing, nervous—but Jack likes her just as she is. His “Don’t you want me?” in the play’s finale is as endearing a portrait of a man’s love for a recalcitrant woman as I’ve seen in a while.

The facades of the two houses, with a telling clothesline between them add immeasurably to the mood. Scott Hengen is the set designer. Heather Brooks designed the props, which include a Maytag dryer. (You have to see the play to understand.)

The efforts of Don Slater and Jessica Slater, lighting designer and associate lighting designer, respectively, are vital in that the seasons and times of day change frequently, and Christmas lights are needed.

The playwright also designed the costumes, which vary little for Jack but include a number of dresses (and one nightgown) for Lizzy.

Advisory: For 12 and up. Some language and a sexually suggestive situation.

Running Time: Two hours and 15 minutes, including a 15-minute intermission.