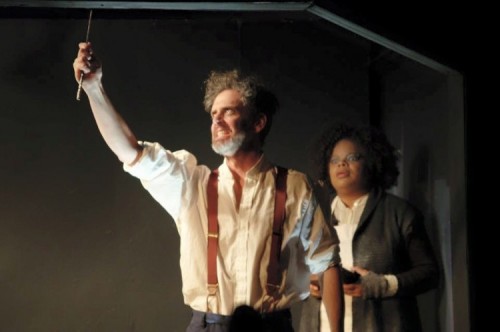 I couldn’t think of a more perfect show for the Halloween season than Stephen Sondheim’s Sweeney Todd, book by Hugh Wheeler! It was creepy, a little scary, and the intimate audience of Laurel Mill Playhouse made it thrilling from the moment those enormous doors were shut, and the darkness descended.

Thomas Pecket Prest wrote the tale of Sweeney Todd, based on the life of a real life serial killer in London in the late 1700s. From this gruesome story, it is put to music by a composer and lyricist that loves the macabre and isn’t afraid of giving the theater lover a seriously not-happy-ending. The Laurel Mill Playhouse, is a perfect venue, a small theater for 60-80 people is utilized in full capacity, the actors literally touching and taunting the patrons. Creepy set design and special effects by Andrea Bush, as well as a live orchestra playing dissonant music directed by William Georg, with singing projecting from all corners of the theater, made me a little tense, a little intrigued and most importantly totally entertained. Costume designer Lynn Kellner, provides the illusion of hardship, beauty, and the dirty, hungry, drab misery of London in the late 18th Century.

Director TJ Lukacsina pulled together a perfect cast with a uniquely magical and haunting blend of voices, music, acting and humor. Sweeney Todd is a show with a lot of incredibly difficult music. The show begins with Sweeney Todd, played by Chad Wheeler, has just been saved by Anthony Hope, played by the melodic Garrett Matthews, returns to London after being in prison in the Australian penal colony, with thoughts of murder and revenge. Sweeney has been wrongly accused and sentenced by Judge Turpin, played by Daniel Plante, when he returns he hears that his wife is dead and his daughter, just a baby when he left is a ward of the lecherous judge who wishes to marry her, he vows to kill him.

Also hated is the Beadle, or sheriff, played by clear crisp vocals of counter-tenor Andrew Exner. Chad Wheeler is reminiscent of actor Hugh Laurie in the TV drama, House in looks, empathy and pessimism. He plays a dour and angry man who has lost everything dear to him. Mr. Wheeler is so perfect for the role both from an acting perspective and a with his smooth deep voice wild hair, and dark hungry eyes.

He shows up at his old residence he reunites with a shop owner, Mrs. Lovett, who is played by the ever talented Kay-Megan Washington. Mrs. Lovett has saved Sweeney Todd’s valuable shaving and cutting tools in the hopes that maybe Mr. Todd would return. With these tools to which he sings, “My Friends,” talking not about people but his tools of the trade, scissors and razor blades, he can return to business. With this sharpened knife, surely can kill the judge.

Ms. Washington plays Ms. Lovett with brilliant warmth, humor and brings wonderful charisma to the role. In her own melodic words, she sings of making the “Worst Pies in London.” The problem with the cooking, not enough good meat. They solve this problem together when they come to the symbiotic business that Sweeney Todd will do the killing, Mrs. Lovett will do the cooking. In one of the most difficult duets patter songs ever written, the song, “Have a Little Priest,” had me laughing about their sinister plans. My favorite line is “LOVETT:…’ow about… rear admiral? TODD: Too salty. I prefer general.LOVETT: With, or without his privates? “With” is extra.” This song goes on for a good 5 minutes of banter, and as good as Angela Landsbury was in this role, Ms. Washington fills these big shoes with ease.

The beggar woman, played by Lauren J. Lowell is the harbinger of evil. Despite her being obviously insane, the beggar senses the wickedness and tells the audience of the looming horrors to come. Adolfo Perelli, played by Michael Iacone is a competing barber, and has “employed” a young lad Tobias, played by 11 year old sensation Sophia Nasreen Riazi-Sekowski that he uses to help sell his wares. From the first entrance of Sophia Nasreen Riazi-Sekowski, you understand that this child actress is truly a brilliant actress as well as a fantastic singer. Written for a boy soprano, the role is among the most difficult in the cast. I wanted to take her home and eat her up myself! Amazing Ms. Sophia! When Mr. Perelli goes “missing” the motherly Mrs. Lovett takes the young boy in. “Nothing’s Going to Harm You” is a beautiful duet between Mrs. Lovett and her appreciative young Tobias. But it is Tobias’ humor and innocence, his loyalty and banter that captivates the audience.

Other complications arise as Anthony Hope coincidentally finds Sweeney Todd’s daughter Johanna, a ward of the judge and falls madly in love with her. The role of Johanna on Broadway was originated by Sara Rice, and I saw her perform on Broadway in the late 1970’s. Ms. Rice had one of the most magnificent coloratura soprano voices, so high and light, that often this role is transposed for mere mortal sopranos. However, not necessary for this cast as Carolyn Freel has a sweet high and light voice, singing this in the original key, written by our favorite misogynistic, sadistic, composer, Stephen Sondheim. Kudos for the guts, you deserve the glory Ms. Freel.

Advisory: Recommended ages 12+ due to scary themes and violence.