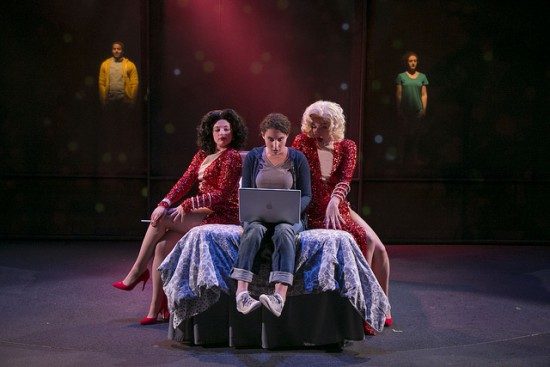 “There is magic in how a family’s love can change the world from gray to Technicolor,” says Joseph W. Ritsch, director of Technicolor Life, Reps Stage’s entry in the Women’s Voices Theater Festival.

Technicolor Life, written by Jami Brandli, is a world-premiere play about three generations of women, each connected like the frames of a film.

But as colorful and vibrant as their lives may be on the surface as the title Technicolor Life implies, a bold look behind the lens explores a family plagued with contemporary social issues, such as the ethics of assisted suicide and the rampant abuse of females in the military. This play challenges the characters to ask themselves serious questions, all with answers that are not always as plain as black and white.

…’Technicolor Life’ is as colorful as its title implies, saturated with different lives blending together.

To perhaps appreciate playwright Jami Brandli’s play a little bit more, let’s understand a little bit about the definition of Technicolor.  Technicolor is a color motion picture process that was used widely in Hollywood from 1920’s to 1950’s celebrated for its highly saturated color.  Perhaps Technicolor’s three-strip process represents the three generations of women in Brandli’s play?  Or is it as simple as that it just represents the 1953 film Gentleman Prefer Blondes mentioned throughout the play which was produced using Technicolor.

Whatever the playwright’s intent, Technicolor Life is as colorful as its title implies, saturated with different lives blending together. But will it have a happy ending like most films during the golden age of Hollywood?

Maxine Hunter (played by a wide-eyed Isa Guitan), age fourteen, is the youngest female in the household who also serves as the play’s narrator.  A self-proclaimed vocabulary geek, when Maxine isn’t studying her school books, she is reading her older sister’s journal.  She is curious to find out why Willamena “Billie” Hunter (Shayna Blass) hasn’t been the same since she came home a month ago as a wounded soldier from the war in Iraq.  Their mother Susan Black (Grace Bauer), a lawyer whose life has been turned upside after the divorce, hasn’t whistled a happy tune for years.  Susan’s mother Francine “Franny” Black (Valerie Lash) visits the all female household adding life and happiness until she announces that due to her poor health she will be ending her life and wants her family to support her final wish by throwing her a good-bye party.

Reading her sister’s journal, Maxine finds out that she was in love with a fellow soldier named Peter (played by a handsome Thony Mena).  But it is the mysterious situation surrounding Captain Rye (James Whalen) that has sparked her curiosity.  With the help of her imaginary friends lifted from the film Gentleman Prefer Blondes, Lorelei Lee (Heather Lynn Peacock) and Dorothy Shaw (Shea-Mikal Green) help Maxine to place an ad on disabledhearts.com on “Billie’s” behalf in hopes of finding romance, thus making her happy again.

Shayna Blass perhaps has the most challenging role in the play as “Billie,” a disabled soldier who lost her hand in Iraq.  But her character lost more than her hand. She lost her career, her dignity and her lover, Peter.  You can see in her emotionally gripping performance that she understands the magnitude of what has occurred in “Billie’s” life.  It’s a performance that is uneasy to watch at times because the situations that have happened to her character have actually happened to female soldiers in real life.

In this production the set, lighting, sound, and costumes all play a particularly important role.  I noticed at the top of the play lots of gray tones in the set by Daniel Ettinger and costumes by Benjamin Argenta Kress.  The gray tones made it all the more effective as Valerie Lash made a splash with her entrance as “Franny” with her colorful personality and wardrobe to match.   Lighting designer Dan Covey made good use of the scrim.  For example, we first see Lorelei and Dorothy appear from behind the scrim with lighting indicating they are on a film set.  Technicolor projection effects by Daniel Ettinger include bursts of colored dots as well as a representation of Hollywood searchlights.  Sound designer Bryan Schlein adds to the proceedings even before the play begins, with classic Hollywood showtunes playing in the background.  A particularly meaningful recurring song, “Blue Skies,” is played in the scenes where “Franny” appears.

Director Joseph W. Ritsch has an eye for detail and a knack at really conveying the message of the playwright to the audience.  One moment in the staging I found quite entertaining was Maxine watching the film Gentleman Prefer Blondes on TV when the ladies from the film appeared to come to life, standing audience right in their red glitter costumes and high heels.

Jamie Brandli’s Technicolor Life forces one to take a close-up look at social issues in today’s American society. Brandli’s script doesn’t pretend to be subtle and delicate like a light pink flower. Instead, the script is like a bold burst of cherry red.  Director Joseph W. Ritsch sums things up by saying, “We couldn’t be more excited to bring this world premiere of Jamie’s beautiful play to our audiences.”

Technicolor Life plays through November 8, 2015 at Rep Stage performing in the Smith Theatre of the Horowitz Visual and Performing Arts Center at Howard Community College — 10901 Little Patuxent Parkway, in Columbia, MD. For tickets, call the box office at (443) 518-1500, or purchase them online.