Theatre Review: ‘The Music Man’ by 2nd Star Productions at The Bowie Playhouse 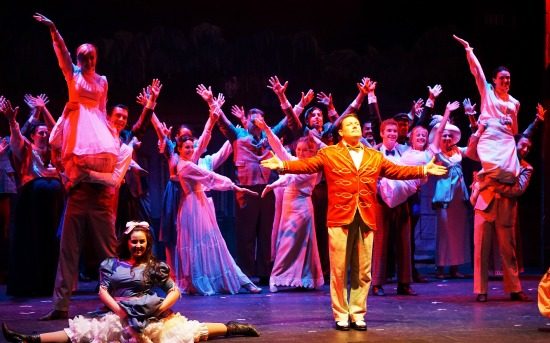 Professor Harold Hill (Lee Nicol) stands with the townspeople of River City, Iowa, at the completion of the amazing score, “Seventy-Six Trombones.”

2nd Star Productions’s The Music Man—book, music and lyrics written by Meredith Willson—proved to be a fine showcase of talent on all fronts, and a delightful evening for the family! With colorful, cleverly well-composed and directed (Joe Biddle) scores such as “Seventy-Six Trombones” and “Marian the Librarian” the atmosphere remained afloat with delight and intrigue in the Bowie Playhouse.

Under the skillful direction of Jane B. Wingard, the cast brought to life the story of an expert con-man, Professor Harold Hill (Lee Nicol), and the townspeople of River City, Iowa. Professor Hill makes a career out of bouncing from city to city selling band instruments, convincing townspeople of their need for a band, collecting money and leaving with the proceeds. River City proves to be different, however, with wary Mayor Shinn (Martin Haynes) and sagacious librarian, Marian Paroo (Emily Mudd), on his tracks. The story unfolds humorously as Hill uses his easy charm and quick wit to weave a web in which he gets caught at the most inopportune time.

Not only was the cast believable, but also extremely multi-talented. Under Andrew Gordon’s choreography, the teens of the town glittered. The dancers were brilliant in their stage presence and superb skill, providing a pulsating backdrop that easily made its way to the top of my list of things I love about this production. Vocally, the cast showcases great talent, harmonizing with skillful humor and just the right amount of quirks to remain consistent with the scene and characters.

Right along with the singing and dancing, the set reigns supreme in this production. Vibrant colors, meticulous details, and various, skillfully constructed (Todd Wingard) backdrops bring this story to life in an extremely memorable way. The set design and painting is absolutely breathtaking – an area where Jane B. Wingard shows herself to be an Artistic Director with great emphasis on being an artist. Elizabeth Starnes and Jeane Binney do a wonderful job with the costumes as well, which add to the resonance of the production.

All of the senses are engaged from start to finish, from the orchestra to the lights, making this production—quite literally—a sensational delight.

Overall, 2nd Star Productions does an amazing job with The Music Man. If you’re looking for  musical theatre for the family, then this could be the perfect production for you!

Advisory: Recommended for ages 10 and up due to length of production and some mature content.