Theatre Review : ‘The Night Alive’ at the Round House Theatre 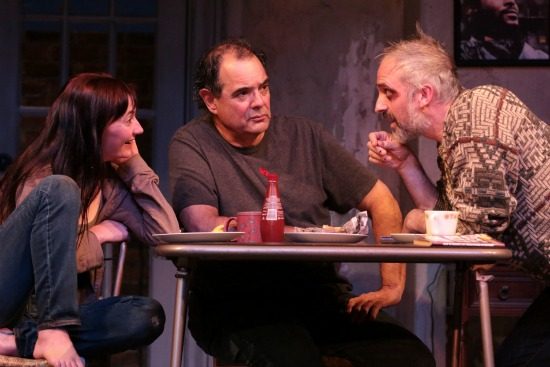 The Night Alive is the most recent play by lauded Irish playwright Conor McPherson. The Round House Theatre’s production, its regional premiere, comes swiftly on the heels of the work’s celebrated world premiere at the Donmar Warehouse in 2013 and its receiving the New York Drama Critics Circle Award for Best Play in 2014. This alone makes it worth seeing while you have the chance.

The play follows a group of characters on the outskirts of Dublin, barely held together by circumstance and the well-worn walls of the room Tommy (played by Edward Gero) rents from his uncle, Maurice (Michael Tolaydo), who also lives upstairs. The unexpected arrival of Aimee (Katie Debuys) is disruption enough for Tommy, Maurice and Tommy’s friend Doc (Gregory Linington) to reveal how fragile their individual and collective psyches really are. With the additional menacing arrival of Kenneth (Joseph Carlson) – Aimee’s abusive boyfriend – the proverbial fuse is lit. As Tommy foreshadows in the opening scene: “this place is a madhouse” (though I’ve had to clean up the actual phrase for publication…).

And yet it is not necessarily in the outward conflict that the work really shines. Under the assured direction of Ryan Rilette, the final moments of this production are breathtaking, elegantly handled by both Gero and Debuys and even more powerful than the more obviously confronting, and violent interactions which recur throughout. These quiet moments pack a real punch.

To just describe what happens in the play, however, is misleading. To offer the events of the play as an answer to Tommy, Doc and Aimee’s existential question “what’s going on?” sung along to Marvin Gaye like any good existential question, is to ignore what’s really going on. The play contrasts the pain of being alone with the pain – and senseless violence – of being together, without clearly preferencing either; the combined unlikeliness of human connection with its sometimes despairing inevitability.

“Death is real!” cries uncle Maurice at one point. The line is delivered with a combination of moral righteousness and existential anxiety which could characterise much of Maurice’s contribution to the play. He is literally, and figuratively, the old guard, a symbol of, and advocate for an Old Ireland – real or imaginary – which is fading, only apparent occasionally in memories or dreams. It is a nation in which, to use his words, “married is married, Belief is always capitalised, and Faith is a birthright rather than speculative metaphysics.” Tolaydo’s Maurice is sharp and affecting. The character’s declarative moral certitude is offset by a nuanced performance, which clearly exposes the conflict and eventual transformation at the heart of the character and play.

In fact, the desperate cry that “death is real” could also summarise much of what’s going on in the play, from the smallest of gestures to the bloodiest of act. And it is a play in which the smallest details have a lot to say. Like the impeccably detailed set by Meghan Raham, everything has been chosen carefully. In the opening scene Tommy enters with Aimee in the dark, and struggles to turn on the lights. In the end, as if from nowhere, Tommy suggests a move to Finland, mentioning only the unending light, completely ignoring the overwhelming dark, which is it’s necessary counterweight. Struggling towards the light, mundane or numinous, is a persistent image. And so it seems apt that Colin K. Bills’ lighting design should be as prominent and as well handled as it is. Delicate, and complex, Bill’s design captures light as a character as palpable as those on stage.

Edward Gero is endearing and vulnerable in the most demanding central role, and Gregory Linington’s portrayal of the perennially comic, tragic wise-fool, Doc, is undoubtedly the standout performance of the evening. While his character might be chronically – and clinically – 5 to 7 seconds behind the rest of us, Linington’s performance is always a few paces ahead.

The role of Aimee is the most challenging in the play. While a central figure, and the instigating force of the drama, she is in other respects a striking absence. What little we hear from her directly is overwhelmed by what the male characters speculate about her, demand of her, or failing that, force from her. Debuys’ Aimee, while clearly well considered, did not always project as powerfully into the auditorium as I would have liked.

Just as McPherson’s role of playwright is almost always prefaced by the word “Irish,” the play is inextricably and meaningfully bound to its particular location. While there was considerable variation within the company, to my ear, the accents in general seemed to present a hurdle for the actors on opening night and so an unfortunate hurdle to being immediately absorbed into the world of the play. I suspect these will become more comfortable through the run.

The title The Night Alive is more than pathetic fallacy, it alludes to two distinct images that haunt a play in which we seem to be perpetually waking, and perpetually dying, but slightly uncertain about both. That said, if you are in search of a lively night of theatre, The Night Alive at the Round House will not disappoint.

Running Time: 100 minutes without an intermission.

Advisory: Language. Violence. Recommended for ages 16 and up.