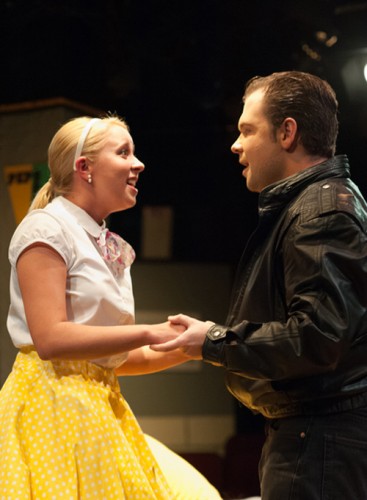 Allison Comotto as Toffee and Alex Cecchetti as Jonny. Photo by CMAldridgePhotography.

If you are looking for the perfect theatrical outing this Halloween season (or any season for that matter), look no further than Spotlighters’ production of Zombie Prom. This hilarious little concoction of a musical broadly spoofs the teenage angst of the 1950s, the emergence of rock ‘n’ roll, tabloid journalism and the fears of the new nuclear age as played out in campy horror films of the era. It even touches on the civil rights movement without disrespecting it. At its sweet, campy core, there is a message of acceptance and opportunity for everyone – do the undead have the same rights as the living?

Packed with big laughs and tons of talent, Zombie Prom is so much fun you won’t want the show to end.

It is surprising that this gem is not performed more often by regional theaters. With a wonderful book and lyrics by John Dempsey and music by Dana P. Rowe, the musical was originally produced in 1993, opened off-Broadway in 1996 and revived in off-west end London in 2009. With the current popularity of The Walking Dead series, this is a timely choice for this Spotlighters’ season. Mix in some Grease and Rebel Without a Cause and it is a potent formula for a great night at the theater.

It is senior year at Enrico Fermi High (named in honor of the man who won the Nobel Prize for creating the first nuclear reactor) and Miss Delilah Strict (Kristen Zwobot) runs her school with an iron fist and a bullhorn. Trouble begins when the new transfer student (and orphan), Jonny Warner (Alex Cecchetti) arrives. He is branded a rebel and troublemaker for taking the “H” out of his name which is emblazoned on the back of his leather jacket.

Of course Jonny and the most popular girl in school, the effervescent Toffee (Allison Comotto), are destined to fall in love. They meet during one of those “duck-and-cover” nuclear attack drills. When Miss Strict and her Toffee’s parents disapprove, they force her to break up with her beloved Jonny. In despair, he throws himself into the nearby nuclear reactor. But true love never really dies. Jonny returns as a nuclear zombie determined to graduate from high school, win back Toffee and take her to the senior prom.

One of Jonny schoolmates Josh (Derek Anderson), who works on the school paper, contacts Eddie Flagrante (Mark Lloyd) of Exposé Magazine about Jonny’s return. Miss Strict does not approve of zombies attending her school. When the students protest in support of Jonny, she starts cancelling activities and sports – even prom night is in her crosshairs.

Flagrante pursues the story and puts Jonny on television, giving him an Elvis-like popularity. He even contacts the orphanage where Jonny grew up. When Miss Strict and Flagrante meet, it turns out they have a history. The twists and turns are obvious and cliché but that is what makes the musical so much fun.

This mostly young (many making their Spotlighters’ debut) cast is ridiculously talented, each with a tremendous voice and great comic timing. Adam Abruzzo as Jake, Emily Biondi as Coco, Clare Kneebone as Ginger and Emily Small as Honey, and Parker Bailey Steven as Candy are fabulous as the teenagers and also play several other roles. Lloyd is perfect as the smarmy tabloid reporter, Flagrante. The impressive vocal talents of Zwobot as Miss Strict bring down the house with “Rules, Regulations and Respect.” But the icing on the cake is Allison Comotto as Toffee and Alex Cecchetti as Jonny, both possessing high-wattage star quality.

Director/choreographer Kristen Cooley does a brilliant work with the small, challenging space of the theater as does set designer Alan Zemla. Robyn Claire, Kristen Cooley, and Fuzz Roark did a great job creating the spot-on 50s costumes. Musical director Michael Tan – who also plays keyboard with his accomplished band, Christine MacDonald, Greg Bell, and Michael Feathers – has brought out the best in this hyper-talented cast. The show clips along with show stoppers and high-octane energy. Packed with big laughs and tons of talent, Zombie Prom is so much fun you won’t want the show to end.