“…STC’s ‘Salomé’ was the most captivating production I’ve ever seen.” – Kaley Beins.

Synopsis: The story has been told before, but never like this. A fortress called Machaerus, sandy cliffs perched high above the Sea of Death. A holy man from the wilderness, demanding freedom for his people, locked deep beneath the ground. A nameless woman, written into history, by others, known to us as Salomé, whose mysterious act changed the course of history. In this new work, internationally acclaimed adaptor/director Yaël Farber reworks Oscar Wilde’s play with ancient Arabic and Hebraic texts. The result is an urgently relevant exploration of the woman’s voice in history, oppressed people’s power over their own bodies, and the explosive connections between religious and political uprising. 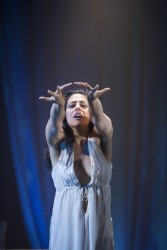 2. 9 to 5: The Musical by Silhouette Stages at Slayton House.

Synopsis: Three women — an overworked office manager, a jilted wife, and an objectified secretary — conspire to depose their smarmy boss and begin making woman-friendly changes in the workplace. Based on the 1980 hit movie. 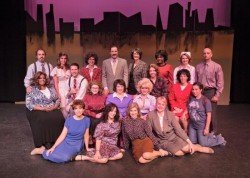 The Cast of ‘9 to 5’ at Silhouette Stages. Photo by Scott Kramer.

3. The Music Man by 2nd Star Productions at The Bowie Playhouse.

Synopsis: The Music Man follows fast-talking traveling salesman Harold Hill as he cons the people of River City, Iowa into buying instruments and uniforms for a boys’ band he vows to organize – this despite the fact he doesn’t know a trombone from a treble clef. His plans to skip town with the cash are foiled when he falls for Marian thelibrarian, who transforms him into a respectable citizen by curtain’s fall. By turns wicked, funny, warm, romantic and touching, The Music Man is family entertainment at its best. Meredith Wilson’s six-time, TONY Award winning musical comedy has been entertaining audiences since 1957 and is a family-friendly story to be shared with every generation!! 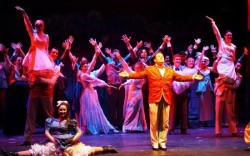 Professor Harold Hill (Lee Nicol) stands with the townspeople of River City, Iowa, at the completion of the amazing score, “Seventy-Six Trombones.”

Synopsis: Gimme A Band, Gimme A Banana, follows the story of iconic 1940’s Brazilian Bombshell, Carmen Miranda, through the sounds of samba and experimental multi-disciplinary theatre. This era of Hollywood glam and cultural commodification is examined through Carmen’s experiences as one of the first Latina performers to immigrate to the United States and become a household name.  This samba puppet spectacle is narrated through Carmen’s songs, which introduced Brazilian culture to the rest of the world, consecrating the actress as a Hollywood’s legendary “Lady in the Tutti Frutti Hat.” 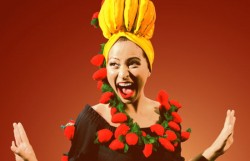 5. Poe’s Last Stanza by Do or Die Productions.

October 22 – October 25, October 29 – October 30 and November 1. Tickets are $65, including dinner, show, non-alcoholic drinks and tax, and can be purchased at www.doordiemystery.com.

Synopsis: In a cognac filled tavern with rose strewn tables, you will spend an evening with Edgar Allan Poe. Share stories, poetry and spirits with Baltimore’s Bard. Poe travels to a local pub and spends an evening with a barmaid, matching wits and sharing wisdom. He might even engage in a little verbal sparring with you! 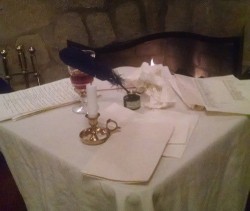