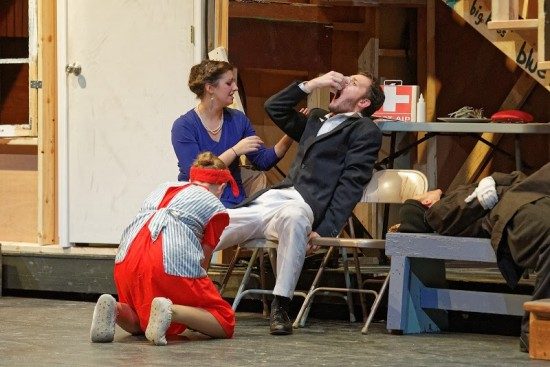 Every actor, techie, and audience member has heard the maxim “the show must go on.” But in their skillful and hugely entertaining production of Noises Off, the cast and crew of Albert Einstein High School brought to life the hilarious story of a dysfunctional theatre company that learns this proverb is far easier said than done.

Called “the funniest farce ever written” by the New York Post, English playwright Michael Frayn’s Noises Off premiered in London in 1982 to laudatory reviews. After its Broadway debut in 1983, the comedy earned several Tony Award nominations and won a Drama Desk Award. From a 1992 film to several award-winning revival productions, the play has continued to be a popular piece in British and American theatre.

Actually a play within a play, Noises Off follows a chaotic theatre company’s production of the fictional comedy Nothing On. The show begins with a disastrous dress rehearsal the night before the production is to open. The frightfully unprepared actors forget lines, misplace props, and threaten the sanity of their already overwhelmed director. The second act of the play shows the action backstage at a performance partway through the show’s tour. Romantic entanglements between the cast and crew have gone awry and dramatic backstage fights threaten the show. Finally as the tour is drawing to a close, relationships have been so tested that nothing can stop the show from deteriorating into irrational, hilarious mayhem.

Equal parts incensed and despondent, Aidan Bradley gave an impressive performance as beleaguered director Lloyd. He displayed a masterful control of tone and inflection, his voice and mannerisms making his dismay and exasperation palpable and all-too relatable.

As ditzy Brooke and forgetful Dotty, Daniela Quintero-Rodriguez and Lily Habenstreit delivered notable performances that revealed their talent for imbuing believability into the absurd.

Though there were some overall enunciation problems and several actors struggled with cultivating and maintaining convincing British accents, the cast never faltered when it came to physical comedy. Over the top but completely in control, the cast skillfully managed the line between slapstick and childish, creating a truly winning performance.

With meticulously timed entrances and exits through a myriad of doors and delightfully convoluted fight sequences, the show demanded cohesion and coordination among its actors. Every member of the cast worked seamlessly as a unit, even as their characters dissolved into anarchy.

Many of the show’s running gags depended on characters slamming doors or falling down staircases, placing numerous demands on the set. Well-designed and skillfully executed, the set rose to the challenge, serving as a polished backdrop and heightening all other elements of the performance.

Unlike their disastrous counterparts in Nothing On, the cast and crew of Noises Off delivered a winning production that displayed their natural comedic adroitness and technical skill. In an engaging, uproarious production, the students of Albert Einstein High School gave a farcical but amusingly accurate look behind the scenes into the frenzied, spectacular world of theatre.