From ‘Jersey Boys’ to ‘The Good Stuff:’ An Interview with Broadway’s Joseph Leo Bwarie 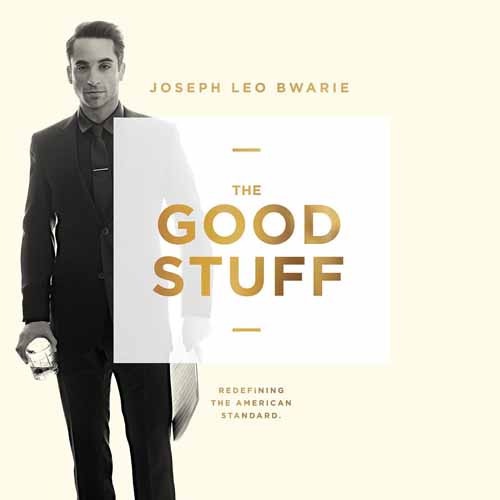 In November of 2011, the Maryland Theatre Guide had the pleasure of interviewing Joseph Leo Bwarie when he returned to The National Theatre in DC and “wowing” audiences for a second, hugely successful run as “Frankie Valli” in Jersey Boys. He had also recently released his critically acclaimed debut solo album “Nothin’ But Love.”

After nearly five years on the road winning rave reviews, Bwarie left the First National Tour in August 2012 to pursue other opportunities, including going back to the studio to record his second album. Nearly a year later, the Great White Way beckoned and Bwarie made his Broadway debut in the New York Company of Jersey Boys.

Recently Bwarie, along with the cast of Jersey Boys, celebrated their 10th record-breaking year on Broadway. Almost concurrently, Bwarie released his long-awaited sophomore album, The Good Stuff, as well as an EP featuring four Christmas songs, called A Little Christmas. We caught up with this very busy, multi-talented performer ahead of his concert on November 15 at Strathmore’s new music venue, AMP, in North Bethesda.

When you first joined the touring company of Jersey Boys in 2007, did you ever think you would be part of the company celebrating 10 years on Broadway?

I am going to make a bold statement. As a child, I never dreamed of working on Broadway. I dreamed of – and still do – singing solo at the Hollywood Bowl. Sharing a Broadway stage with so many talented actors these last few years has been an unexpected joy and milestone in my uncharted career. I liken my time within the Broadway company to that of an extended stay with far away relatives after growing up with my First National Tour family. We “got” each other from day one, as families often do. But through the years our connectivity on and off stage has grown to a level that was certainly palpable from where I stood at the 10th anniversary show.

You have the distinction of playing the role of “Frankie Valli” more than any other actor. What keeps the role so inspiring to you?

I am the record holder. Whoa. I was recently discussing “inspiration” and reminded about where one finds it. It was simply put, “Inspiration is everywhere. Open your front door and look outside.” So true. Inspiration IS all around us.

You took some time off this past summer to play the titular role in Napoleon during the New York Musical Theatre Festival. Describe that experience.

The NYMF schedule is intense – four weeks from start to finish. The first two weeks, I rehearsed Napoleon all day and performed Jersey Boys at night. For the final two weeks, which included performances, I took 12 shows off from portraying a notably short, legendary pop singer to portray a notably short, legendary French Emperor – two very different men. Creatively, it was a very raw, sexy process. It was so refreshing and liberating (no pun intended) to get away from the box of falsetto and 1960s suits.

Through the years, you have also collaborated with the legendary film and TV director Garry Marshall, including the recent play, Billy and Ray, first in Los Angeles and then last year at New York’s Vineyard Theater. Talk a little about working with Mr. Marshall and do you have any plans to work together again in the future?

My hope is that there will always be future plans to join forces with Mr. Marshall. It is a gift to collaborate with someone who makes you laugh throughout the workday. And he’s not even trying. He’s just that funny. No… brilliant. Astute. Garry accesses a room the way a pro golfer sets up for his swing. Does that make sense? Meaning, he considers every subtlety that will affect the connection. Because of this, even just sharing lunch with Garry is education (and a treat). His keen knowledge of the industry and his great understanding of humanity are imparted in any setting. His film, Mother’s Day, hits theatres early spring.

You are also a long-time member of LA’s award-winning Troubadour Theater Company. In fact there are several alums from the company who have, and are, working on Broadway. What is it about being “Troubie” that has helped you and others with their careers in theater?

What does one say about the illustrious Troubadour Theater Company? There aren’t enough words. The core group of players from my era with “Troubie” has a piece of my heart. Talk about inspiring. I believe any experience an actor has adds a layer of education to who we are as artists. To be fair, I can only comment on my time with the company – my “Troubie” heyday. I’d say 90% of those performers are no longer in the trenches. But we are all still in touch. For me, those evenings of rehearsal leading up to nights on any given stage were many descriptive words, but above all… magical.

How different or similar is “The Good Stuff” compared to your debut album “Nothin’ But Love?”

For me, my records are an extension of who I am. I like to leave any decision making up to each listener. There are 25 songs combined from the two albums. That is some good compare and contrast material.

What was your song selection process for this new album and did it evolve and change along the way?

I spent almost three years creating The Good Stuff. That spans from the moment I mentally committed to a second album through the date that cases of CDs arrived at my door and the album hit iTunes. But I am always writing down a song title or reminder lyrics for a song I want to explore. Sometimes I will empty my pockets and there will be song written on a napkin and notes scribbled on the backs of receipts, amid loose change. If a melody grabs me or lyrics make me pause and ponder, it gets written down. (Side note: I already have a list compiled called A VERY BWARIE CHRISTMAS – working title, of course). The songs for The Good Stuff were filtered through all sorts of criteria and then my arranger/producer weighs in. The song list changes constantly and soon there are more “definites” than “maybes.” I guess it’s like response cards – who is coming to the party? The catch is, you have to be invited first.

What appeals to you about Great American Songbook and that style of music?

I love music. I don’t like labels. In a recent dialogue with XM host Mark Ruffin, he said I am brave – brave to take on redefining the American Standard. That is so exciting to me, as if I am some kind of big band music ninja warrior– stealth in the fight to bring my brand of music to everyone around the world. Songwriters are the backbone to all great music. The arrangers build on that foundation. Then musicians add the next level and finally a singer offers a perspective and tells the story, pulling all the layers together. The end result is magic – something from nothing. We recorded A Little Christmas (my holiday EP) this year and when we were finished with the big band session, I turned to the engineers and Charlie [Calello] and said, “This didn’t exist yesterday.”

What was it like collaborating with the great arranger/producer Charles Calello on all of your recordings? Talk about some of the amazing musicians who can be heard on “The Good Stuff.”

Mr. Calello is one of the greats. Now a lunch with Garry Marshall and Charlie Calello would be one for the books. I told Charlie if I had a million dollars, we would record a song every month until the money ran out. He was on board for that. And we would certainly fill the studio with great musicians. This year – between The Good Stuff and A Little Christmas – we worked with over 60 musicians including (but limited to) Bucky Pizzarelli, Lou Marini, John Tropea, Allan Schwartzberg, Rick Krive, Randy Brecker, Andy Ezrin, Paulinho Da Costa and Tito Puente, Jr. The list goes on and every single player brings his “A” game and plays his heart and soul onto those records.

The role of “Franki Valli” is so physically demanding, will you continue to do Jersey Boys as well as solo concerts and promoting “The Good Stuff?”

The Good Stuff is just getting started. I have been rehearsing (and performing) with a dynamite band we put together and I have a couple of new suits – so all signs point to more concerts in 2016.

It seems you are constantly in motion, like that famous line in Jersey Boys, referencing the Energizer Bunny. Singer, actor, writer, director, recording artist – what are looking to do in the future? Any dream projects?

I am living the dream. Right now, it’s all about The Good Stuff and I think that is going to inform the next leg of my journey.