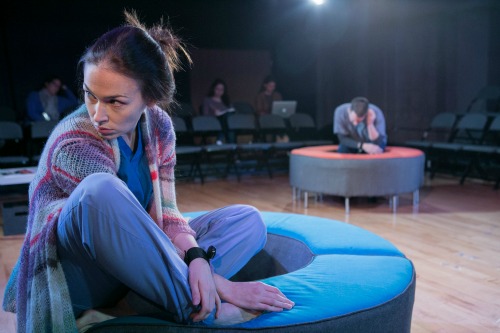 Forum Theatre’s production of Johnna Adams’ World Builders, is currently playing in the Woolly Mammoth Theatre Company’s rehearsal studio. The play follows Whitney (played by Laura C. Harris) and Max (Daniel Corey) as they undertake experimental treatment for schizoid personality disorder (SPD). Individuals affected by SPD will sometimes simultaneously inhabit rich fantasy worlds. As the program notes, “many prefer living within their controlled, often fantastical and wildly imaginative worlds.” It is these worlds that are the focus of the play, and the target of the imaginary treatment undertaken by Whitney and Max. We bear witness to the changes in their lives as their fantasy worlds begin “dying.”

Do we have a moral responsibility to our imaginary worlds?

Early on, Whitney clarifies that there is a big difference between a story and a world and Forum Theatre’s production beautifully creates ‘a world’ for our story. Mary Keegan’s lighting brings the stage to life. Debra Kim Sivigny’s set is smart, and beautifully exploited by Amber McGinnis Jackson’s direction, while her costumes subtly and sympathetically follow the characters’ development. The sound design by Tomas Sowers is perfectly paced and executed, contributing an important reality to ‘the world’ of the production,  just as it is used heighten the reality of Whitney’s imaginary world.

Do we have a moral responsibility to our imaginary worlds? The play and production suggests we do, and if so, then we must ask difficult questions about how theatre, as part imaginary world, engages with real world issues. Is it, for example, appropriate to laugh at the eccentricities of someone who has been diagnosed with and is undertaking treatment for SPD? Are they funny? I have to admit that I found it less immediately funny than some other audience members on opening night, and than it might be intended. While Whitney’s imaginary world seems constructed often for the purpose of eliciting light relief, Max’s fantasy world in which women die over and over again is, by contrast, harrowing. I found it deeply distressing.

According to PsychCentral, “people with personality disorders, in general, do not often seek out treatment until the disorder starts to significantly interfere or otherwise impact a person’s life.” In Whitney’s words, the “things you make can always unmake you,” but this ‘love story,’ as it’s billed, is more about our characters’ love of their imaginary worlds than each other and herein lies the central moral ambiguity of the play. Taking the medication destroys the imaginary worlds, but in the final scene the real world damage for our characters of staying in imaginary worlds is laid bare. While, superficially, we are offered a happy ending, there is something very menacing about the final compromise when we consider its real world implications.

Laura C. Harris’ performance hits its stride in the final scene and becomes very compelling. In earlier parts of the play, a very clear decision was made for the character to have particular physical ticks. As they largely disappear after medication, I assume we are to associate them directly or indirectly with SPD. This decision, well controlled by Harris, didn’t add anything to my understanding of the character or the condition. Daniel Corey handles the gradual transformation of Max very well, illuminating the profound impact that the nature of his imaginary world has on his own sense of self. As in the real world, the characters’ experiences of SPD are in many ways individual and disparate for all that they might share.

The play asks us to choose between the real world and fantasy worlds. As an audience member I felt the conflict of the characters. Their imaginary worlds can be fulfilling, until the real world intrudes, but invariably the real world does intrude. If we take the play as pure fantasy, then my experience of the play seems unfairly and belligerently humorless, however, if we draw the real world into it, as I think we are encouraged to do by the production, then perhaps our responsibility as theatre-makers when presenting issues of mental health might need to be held to a different set of standards.

If World Builders is difficult theatre then all the more reason to go along and engage with this discussion. As the Forum Theatre’s mission is to ‘start conversations’ they are extremely successful at this with World Builders. The issue of how to present and talk about mental health is an important one, and confronting it directly a meaningful response. As the production proves, there are no simple answers.

Advisory: Ages 16 and above. Adult content and detailed discussions of violent acts.