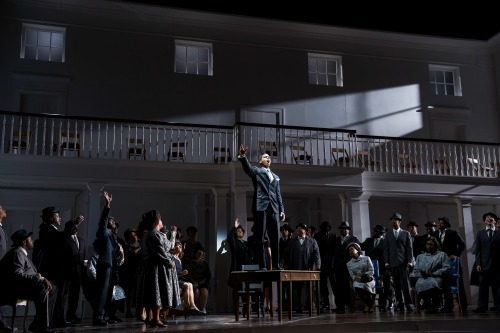 Appomattox has received a lot of hype here in DC. The opening night crowd were there to be part of a new kind of opera: a relevant English-language opera. Important. Relatable. Innovative.

Composer Philip Glass and Librettist Christopher Hampton first premiered Appomattox in 2007 with the San Francisco Opera. WNO’s Appomattox is a world premiere of the revised version planned to coincide with the 150th anniversary of the Civil War.

Appomattox spans the breadth of 100 years. Act I begins in 1863 but concentrates on the final days of the Civil War. Highlights include President Lincoln’s (baritone Tom Fox) meeting with Frederick Douglas (Solomon Howard) in 1863, Lincoln’s re-election in 1864, and the Liberation of Richmond and surrender of Robert E. Lee (bass-baritone David Pittsinger) in 1865.

Act II takes place during the 1960s Civil Rights Movement, spotlighting the death of Jimmie Lee Jackson, the march from Selma to Montgomery, the death of activist Viola Luizzo (soprano Melody Moore), and the Voting Rights Act signed into law by President Johnson (Tom Fox) in 1965.

The opera concludes in 2011 with a meeting between Edgar Ray Killen (David Pittsinger), imprisoned for the manslaughter of three civil rights workers in 1964, and James Bonard Fowler (bass Timothy J. Bruno) sentenced 40 years later to 6 months for the death of Jimmie Lee Jackson. The casual attitude of these two men confirms what the audience already knows; our work is far from done.

WNO knows how to construct exquisite tableaus. The tableau for Act I’s choral opening, paired with an actual Civil War campfire song, “Tenting on the Old Camp Ground” is haunting and indicative. The most musically innovative and captivating moments are left by and large to the WNO chorus. Glass makes strategic use of period military and religious themes and although this is not particularly musically inventive, it is atmospheric.

Appomattox is undeniably, musically flat. There is a notable lack of rousing or powerful musical moments. Glass does an effective job of building tension, but where does it go? Nine times out of ten, the tension he proffers recedes into a dull climax. Beyond the music, there is very little sense of a higher purpose in Act I. The interactions are stiff and lack energy. There are no surprises, very little unexpected conflict, and absolutely no character development.

Bummer. Just when I had almost completely tuned out, correspondent T. Morris Chester (tenor Frederick Ballentine) delivered the most authentic and introspective moment of Act I. Chester describes the Colfax Massacre of 1873 and derides his own optimism following the end of the Civil War. Ballentine’s performance is an emotionally intelligent and spirited portrayal of a justifiably angry man. Perhaps it was all worth it.

President Johnson (Fox) provides much needed comedic relief. After an hour of stiff exchanges, President Johnson’s (Fox) gregarious nature is a breath of fresh air. A powerful baritone, Fox controls whichever scene he is in.

In comparison to Act I, Act II flies by. Unfortunately, the lack of character development is still painfully evident although a sense of higher purpose is finally communicated. The actors bring the audience into the problem. We are made culpable. The opera ends powerfully with the cast of woman hauntingly petitioning the audience to continue to fight racism and hatred.

Realism abounds. Bravely, defiantly, Glass, Hampton, and the WNO do not shy away from blood, gore, and taboo language that epitomize the civil rights battles fought over the last 100 years. They are not afraid to juxtapose coarse comedy with spirituality. The bouncing narrative is unpredictable and paired with a score that never goes quite where you think it will, Appomattox is not formulaic.

Overall, Appomattox was not as slick as I would expect from the WNO. Set Designer Donald Eastman has created a multi-leveled set piece that serves as the White House, Appomattox Court House, The River Queen, and other miscellaneous locations. Too decadent to be minimalistic and still too plain to be striking, this set piece ends up feeling superfluous. Director Tazewell Thompson makes smart use of his chorus and together with Lighting Designer Robert Wierzel skillfully directs the audience’s attention and builds the mood. Again, nothing super innovative or exciting.

Appomattox is freshman effort and it shows. Unfortunately, the week long run will inhibit any working out of the kinks or picking up of steam. I can only hope that a world premiere of a revised-revised version gets underway. I’ve been harsh here but, mark my words, Appomattox is not done growing and developing. Appomattox has the potential to one day be a unique, culturally significant opera. It may be worth it to say that you knew it when.

Running Time: Approximately 3 hours, not including one 25 intermission.