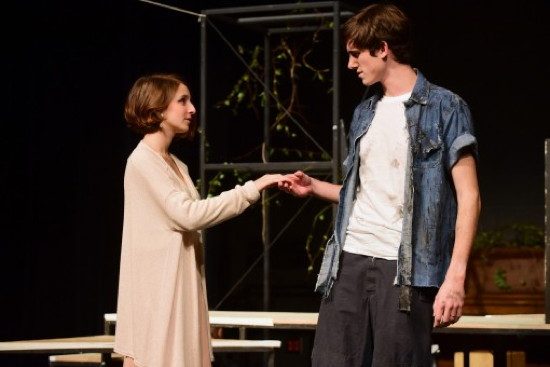 A Streetcar Named Desire by Tennessee Williams is a drama that played at Tawes Theatre at Washington College in Chestertown, MD, and is directed by Amanda Klute.

A Streetcar Named Desire follows Blanche Dubois (Olivia Libowitz) as she moves from Laurel, Mississippi into an apartment with her sister, Stella (Madison Morton), and her husband, Stanley Kowalski (Caleb Powell) in New Orleans. Blanche’s flirtatious nature and attractive appearance create problems between Stella and Stanley who already have a troubled relationship. This creates further conflict in the household. Stanley’s friend, Mitch (Brian Gicking), arrives on the scene and becomes enamored of Blanche, but as rumors of Blanche’s past catch up to her, she finds herself in a serious predicament.

…kept the audience deeply involved from start to finish.

All of the characters in this show were cast appropriately and all the acting was solid and even impressive in the case of the main characters. Olivia Libowitz and Caleb Powell, who played Blanche and Stanley, respectively, had specifically very genuine performances and served their characters well. Libowitz’s feminine, confident gestures and movements, and seductive yet emotional voice were especially impressive, as she used both consistently throughout the show to strengthen her character and her overall performance.

Powell made use of body language and posture to convey feeling and character, and his voice was strong and often full of emotion. Madison Morton, who played Stella, was solid in her role and played the “middle man” very effectively, as her sympathies lay between both her sister and her husband. She was genuine in her role and solid in her truly emotional and effective performance.

The set for this show was unique, yet effective. The show is set inside the Kowalski’s home, and the set took the idea of a home and made it into something simple, stark, and almost empty feeling, but still a home, with everything necessary to stay together, much like the Kowalskis themselves. The lighting was mainly created using lightbulbs hung around the set, which was different, but very effective. They created an intentionally strange, sometimes even isolated feeling that truly emphasized the emotional strangeness that characterizes the characters in the play. The costumes were appropriate and clearly distinguished each character’s personality without being at all distracting, and the makeup was kept simple and somewhat natural, while still being appropriate to each character.

The show was, overall, a harrowing story involving spousal abuse, mental illness, and many other hard-hitting issues that was well directed by Amanda Klute, impressively acted, and kept the audience deeply involved from start to finish.

A Streetcar Named Desire plays from November 12-14 at the Tawes Theatre at Washington College in Chestertown, MD.