Theatre Review: ‘Akeelah and the Bee’ at Arena Stage 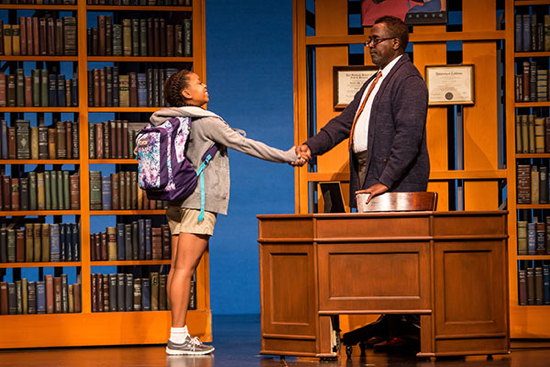 Photo of Johannah Easley and James A. Williams by Dan Norman.

Looking for inspiration and joy in the holiday season? See Arena Stage’s presentation of Akeelah and the Bee by the Children’s Theatre Company. There’s plenty of humor and some pathos in the play, about an 11-year-old inner-city girl who overcomes bereavement, poverty, fierce competition, and racial stereotypes to tie for first place in the Scripps National Spelling Bee.

In turn, the play is based on the highly popular 2006 drama film written and directed by Doug Atchison starring Keke Palmer as the girl, Angela Bassett as her mother, and Laurence Fishburne as her coach.

Cheryl L. West adapted the script for the stage. Charles Randolph-Wright directed this charming and uniformly well-acted production. Opening night—November 19—elicited not only on enthusiastic applause for the cast and a standing ovation for its young star but frequent laughter and oohs and ahs throughout.

Johannah Easley is indeed a winner. I’m not sure of her age, but am assuming she’s older then the character she plays. Regardless, she has enormous poise and unflappability. Her sharp wit, alternating with self-doubt, comes across loud and clear. This is a role Easley was born to play.

Not only does she have to be onstage virtually every minute, reciting a great many lines and undergoing emotional changes, but also she is called upon to jump robe and spell long and difficult words in the bees woven into the action of the play.

Encouraging her in a visibly strict but affectionate (under the surface) manner is her coach, Dr. Joshua Larabee, a professor with demons of his own. Theirs is a mutually beneficial relationship, in which Akeelah helps him as he helps her.

James A. Williams brings a dignity and conviction to the role, conveying every reason Akeelah would respect him even as he feels, for a time, forced to “reject” her. (The resolution is a little too neat, but it’s a delight watching Williams regardless.)

One of the difficulties of the script is a certain amount of stereotyping. Akeelah’s father was killed in a crossfire, and her beloved brother, Reggie, has gotten involved in petty crime and drugs and has fathered a child he can’t support.

Of course, Achison was trying to show that members of a group can succumb to stereotyping themselves. So even the highly intelligent Akeelah hesitates to compete because classmates tease her for her academic leanings. Even her best friend, Georgia, abandons her for a while.

It is much to the credit of Nathan Barlow that he rises above stereotypes, making Reggie a sympathetic and three-dimensional character that never loses his sense of humor or devotion to his sister.

Aimee K. Bryant, as the script apparently requires, flips from the serious, grieving, and overburdened mother who disapproves of the bees to enthusiastically embracing them. It happens a little fast, but Bryant tackles the transition well.

If Zaria Graham is funny as the motor-mouthed Georgia, Greta Oglesby is hilarious as Batty Ruth, the proverbial eccentric neighbor with a heart of gold. In one particularly funny scene she tries to teach voice to a clueless student.

Milton Craig Nealy doubles as Drunk Willie, the janitor who can’t understand why people look at him when the word “dipsomaniac” comes up in a bee practice, as well as Akeelah’s devoted school Principal Welch. Talk about versatility.

Sean Phinney is a nervous Dylan Chiu, the bee competitor who has been practicing for years. Tony Nam is his obsessive father and a pronouncer and judge.

Another winning point in the production are the sets designed by Alexander V. Nichols and executed by show carpenters Nisha Lacy Reaves and Paul Ring. They have created wooden see-through structures to suggest apartment buildings.

Advisory: For children 10 and up.