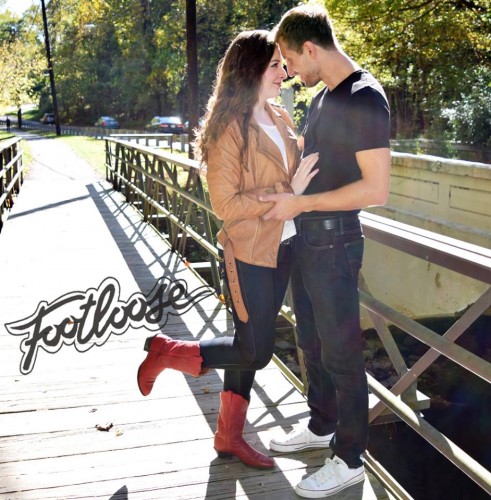 Sirena Dib as Ariel and Derek Tatum as Ren in FOOTLOSE Photo by Dana Robinson.

Footloose, the four-time Tony Award-nominated 1996 musical that was adapted by Dean Pitchford and Walter Bobbie from the mega-popular 1984 movie of the same name is on display at the Rockville Musical Theatre (RMT).  An energetic volunteer cast provides a couple of hours of nostalgic foot-stomping numbers embedded in a plot that tugs at your heart.

Heart, yes, but this musical, is mostly about the feet as in dancing, which is the show’s hallmark. It becomes the focus of a bunch of teenagers who try to persuade the recalcitrant Reverend Shaw Moore (Paul Loebach) and other adults in the fictional rural town of Bomont to allow the kids to hold a dance despite the fact dancing had been previously banned by Moore.

Ren McCormack (Derek Tatum), a high school student who loves to dance in Chicago’s clubs heads off to Bomont with his mother after his father abandoned them and financial difficulties ensued. They stay with his aunt and uncle as he attempts to adjust to his new life.

However, Ren has difficulty fitting in the new town and school. He catches the eye of Moore’s rebellious daughter Ariel, which causes friction with her “trailer trash” boyfriend Chuck Cranston.  More importantly, Ren is miffed at the town’s prohibition of dancing, which unbeknownst to him at the time, was put in place because four kids were killed in a car crash some time ago following a dance.  One of those victims was Moore’s teenage son.

Ren takes his case to the town council to rescind the dance prohibition but fails. However, in a face-to-face heart rendering conversation with Rev. Moore whereby Ren points out that they both experienced losses: his father abandoned him and Moore lost his son.  That connection made Moore re-think his strict relationship with his daughter and influenced him to relent on his opposition to the dance.

Laurie Newton directed and choreographed the RMC mounting of Footloose that features superb dancing and excellent staging throughout.  The music was composed by Tom Snow with the lyrics written by Dean Pitchford.  A former Billboard chart-topping album, Footloose features such popular tunes as “Holding Out For A Hero,” “Let’s Hear It For The Boy,” “Almost Paradise” and, of course, the rousing up-tempo title song.  Michelle Bruno ably directs the eight-piece orchestra.

…a couple of hours of nostalgic foot-stomping numbers…

In a musical that is themed around dance, this production could not have had a better lead than Derek Tatum as Ren. An experienced polished dancer, Mr. Tatum showcases his skills and agility in executing an array of dance moves with grace and strength.  Though Mr. Tatum shines, he is well supported by the cast who also performed admirably to Ms. Newton’s choreography.

In addition, Mr. Tatum provided solid acting and well-timed comic lines throughout. He demonstrates his vocal chops particularly in the love song duet “Almost Paradise” with Sirena Dib as Ariel Moore.  Their harmonies blend beautifully in this popular ballad. Unfortunately, his first act’s number “I Can’t Stand Still” was marred by a poor-working mic during the performance reviewed.

Mr. Loebach convincingly plays the role of Rev. Moore, exhibiting sternness early on then a more human side as he is ultimately made to see the light. He gives a powerful sermon and vigorously defends the ban on dancing at the council meeting demonstrating his acting skills. Mr. Loebach also movingly sings “Heaven Help Me” that spotlights a rich baritone voice.

As Rev. Moore’s wife Vi, Lee Michelle Rosenthal competently offers warm balance to her stubborn husband. She is excellent in “Can You Find It In Your Heart.”

Other notable cast members include Ms. Dib as the defiant Ariel Moore; Zoe Alexandratos as Ren’s mother Ethel; Robin Samek as Ariel’s bubbly best friend Rusty who is in love with Ren’s shy and awkward friend Willard who is played by Tyler Adams; and Cody Gilliam as the hot-tempered Chuck Cranston.

The remainder of the company provided the leads with strong support especially in the dance numbers.

Mr. Gilliam also was the set and costume designer. There was an abundance of set pieces and props especially for a community theatre presentation.  My favorite is the yellow VW Beetle that was pushed on stage.  It resembled my first car, a yellow Beetle, which, at times, also had to be pushed.

The scene changes were effected flawlessly and at the proper pace. Often when there is much scenery to be moved, such actions are too slow leaving dead time. That was not the case in this well-staged and well-directed production.

The solid cast and crew, the iconic music, and the multi-talents of the lead performer Derek Tatum, make this a recommended show. So everybody cut loose.