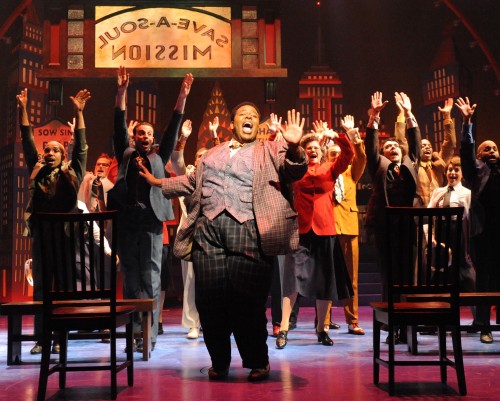 In Guys and Dolls there are a number of quaint references to slices of New York life from yesteryear: Klein’s, Saks, Wanamaker’s, the Roxy, the A&P, floating craps games, a casual day trip to Havana, and the list goes on.  The beauty of superior musicals, however, is that they are timeless in that they are as captivating and entertaining today as they were in say, 1950, when the original production opened on Broadway.

The current iteration of Guys and Dolls now playing at the Olney Theatre Center restores the nostalgia of 1950 New York while delivering a bravura musical extravaganza under the impeccable direction of Jerry Whiddon, choreography by Michael J. Babbitt and the musical direction of Timothy Splain.  An exceptional, perfectly cast company and technical crew carry out the vision of these directors in a way that will render your hands raw from all the applause-worthy moments.

Contributing to this effort is the show’s superlative material.  With music and lyrics by Frank Loesser and a book by Jo Swerling and Abe Burrows, Guys and Dolls captured so many awards in both its original rollout and the subsequent revivals that there are too many to list.

Needless to say, the music catalogue, which is outstanding and varied from top to bottom, plus the clever book, places Guys and Dolls in the same category of brilliance as the Rodgers and Hammerstein, Lerner and Loewe, and Jerry Herman musical classics.  As in the case of those shows, Guys and Dolls withstands the test of time.

The music is delightfully entwined in the zany plot involving gambler Nathan Detroit (Paul Binotto) who needs $1,000 for a venue to stage a crap game—“The Oldest Established Floating Crap Game”—with all the big-time gamblers in town, whom he cannot disappoint for the sake of his own reputation, and yes, safety.  He also has been avoiding marriage as he has been the fiancé of Miss Adelaide (Lauren Weinberg), a lovely blond nightclub singer, for 14 years and counting.

There is Sarah Brown (Jessica Lauren Ball) who is under pressure to save the souls of sinners in the mission she runs.  Any thoughts she may harbor of romance take a back seat to her mission.

Nathan who is desperate to come up with the grand in which neither he nor his employees Nicely-Nicely Johnson (Tobias Young) and Benny Southstreet (Evan Casey) have or the credit to rent space at the Biltmore garage—a place selected to avoid the watchful eye of policeman Lt. Brannigan (Ron Heneghan) who is relentless in his quest to stop the gamblers.

As a last-ditch effort to raise the money, Nathan places a $1,000 bet with a more successful gambler Sky Masterson (Matt Faucher) that he will not be able to convince Sarah—so committed to saving souls at the sacrifice of her personal life—to go with him to Havana.  He accepts the bet, and she is lured to Havana based on Sky’s promise to deliver 12 sinners to her mission. The rest of the hilarious tale will be up to the audience to enjoy.

As pleasing and endearing the book is, it’s the music that makes the show a classic.  Songs like “A Bushel and a Peck,” “Guys and Dolls,” “If I Were a Bell,”  “Luck Be a Lady,” and “Sit Down, You’re Rockin’ the Boat” are famous.  But all the numbers in Guys and Dolls are gems.

The Olney cast did these great songs justice with outstanding vocals throughout. As Miss Adelaide, Lauren Weinberg performs “A Bushel and a Peck” and “Adelaide’s Lament” in the way Mr. Loesser had imagined.  The beautiful vocals of Jessica Lauren Ball who shined so brightly in Olney’s production of The Sound of Music when she garnered a Helen Hayes Award nomination are on display again as Sarah when she performs “If I Were a Bell” and in the bouncy duet with Ms. Weinberg in “Marry the Man Today.”

Matt Faucher as Sky Masterson brings home the iconic number “Luck Be a Lady” with his strong bass-baritone voice.  He also delivers “My Time of Day” in style.

The poor schnook Nathan Detroit is played with spirit by Paul Binotto.  He skillfully executes all the comedic scenes in which he is featured and his performance in the duet with Ms. Weinberg “Sue Me” is spot on.

Then there is Tobias Young as Nicely-Nicely Johnson.  Mr. Young demonstrates his comedic props in several scenes with well-timed lines, facial expressions and body language.  Vocally, he is off the charts.  He performs well in several numbers including “Fugue for Tinhorns,” “The Oldest Established,” and “Guys and Dolls” with other cast members.

However, his lead in “Sit Down, You’re Rockin’ the Boat” represents the show-stopper that every great musical must have.  Mr. Young and the rest of the company sing the up-tempo number with gusto while the precise choreography is amazing.

So spectacular was this number on the night this show was reviewed, that the raucous ovation was extended well beyond the norm. It was akin to a baseball player hitting a home run and the crowd’s cheers continue so long in quest of a curtain call from the batter.  This number was the production’s home run.

Choreography throughout the production is dazzling thanks to choreographer Michael J. Bobbitt.  As an example, the vigorous dancing in “Luck Be a Lady” soars.

The “Havana” number that is highlighted by a fight scene is simply sensational.  Executed to near perfection, the ensemble manages the high-energy dancing and fighting while they seamlessly clear the stage of the props and furniture at the scene’s end.  Ben Cunis is the fight choreographer for this amazing scene.

Kudos goes to Ron Heneghan as Lt. Brannigan, the intrepid policeman, who maintains his Irish brogue as a throwback to New York’s Irish policemen.  On that point, all the actors consistently display New York accents without any slips.

Also, a nod goes to Richard Pelzman who convincingly plays Big Jule, the tall fear-invoking gangster from Chicago thirsty for the craps game.

The remainder of the company is proficient in their acting, dancing and vocals that add strong support to the leads.

Rosemary Pardee does a fine job is fitting the cast in 1950s attire from suits for the guys and dresses for the dolls to missionary uniforms and costumes for assorted street characters.

Scenic Designer Dan Conway conveys an image of the New York City skyline with lights in the windows as the background while drop-down scenery above the stage is used to denote scene changes.

Sound Designer Jeffrey Dorfman who allows the audience to hear street traffic noises prior to the opening to set the mood and Lighting Designer Colin K. Bills do a fine job.

The Olney production of Guys and Dolls is first-rate with all the pieces fitting together expertly.  A talented cast and crew under superb direction will result in one of the most memorable shows you will see.  You can bet on it.