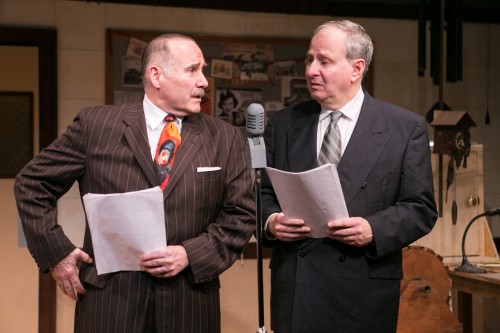 Christmas is the quintessential time of tradition. We have our unique memory-laced decorations, the one holiday dish we can’t do without, or that special trip downtown. For many of us, watching “It’s a Wonderful Life” is as important to our celebration as gifts under the tree.

In Washington Stage Guild’s presentation of It’s a Wonderful Life: A Live Radio Play, our classic is reverently breathed new life as it is reimagined as a live radio play. Reflecting the time in which the movie was made, the nostalgic era of the late 1940s, the beloved characters are presented by an uber-talented cast of 5 actors, with the wonderful addition of our creative sound man onstage. In short, it’s a wonderful show.

Joe Landry’s stage adaptation of the 1946 film faithfully recreates the action and the key dialogue, while painting a vocal picture for our imagination.

Lest I bore you with a story ingrained in our collective consciousness, our hero George Bailey has grown up in the small anywhere town of Bedford Falls NY, but he is a dreamer, always planning to see the world and do big things when he grows up. But fate works against him as his father dies, and the rich, evil Mr. Potter tries to wipe out the savings-and-loan business and take over the town. George’s turn never comes, and he settles in Bedford Falls, married to Mary, giving up his dreams far away from his hometown.  It all comes crushing down when the accidental loss of $8,000 of bank money leaves George on the verge of ruin, he contemplates ending it all.

In short, it’s a wonderful show.

Looking up from above is Clarence, George’s slightly addled 292-year-old guardian angel, comes to earth to help him. He shows him what the town and his loved ones would have been like if George had never been born. Reliving his life as a ghost, he now is a man with a reawakened appreciation of his life and the people he loves.

In this staging, the actors are dressed to the nines in fashions and accessories suggesting that their characters live in the golden age of radio, begin standing in front of microphones, scripts in hand. But they are soon moving about on and off the stage, gesturing and interacting in lively, realistic ways, with the help of only the in-house analog and mechanical addition of sound design–shoes on a desk, rain and wind, a mini door slamming shut. Spot on work by Steven Carpenter as the nattily dressed soundie.

At the outset, we are treated as though we are the audience for a live radio broadcast, replete with a fun, tacky APPLAUSE sign.  The actors are introduced and the radio play unfolds, more interplay than one would be prepared for. In fact, this is the way that promo radio shows were put on just before the release of a film. Jimmy Stewart and Donna Reed likely did a similar one, though we have no record of it.

In this show, the talent just crackles. Joe Brack is our George Bailey, generating believable sympathy and nice transitions through his life course. He even adds a certain vocal unsteadiness reminiscent of Mr. Stewart.

Vincent Clark, a Guild veteran, adds his marvelous pipes to the show. Most impressive was his  switching from Mr. Potter’s choking, coughing old-man voice to the narrator’s mellifluous speech in the blink of an eye. He also plays George’s doddering Uncle Billy and George’s father.

Jenny Donovan plays Mary and various children with a sweet earnestness and teams well with George in the romantic moments.  Julie Ann Elliot plays town bad girl Violet with spunk and sadness, as well as George’s Mom, and little Zuzu. Finally Lawrence Redmond shows his versatility playing Clarence as well as friend Sam Wainwright, and bar owner Martini.  Both of George’s daughters are voiced by the talented Julie-Ann Elliott.

One of the nice touches are the full cast radio ads, the key income for the radio station–especially for the local but now shuttered Woodward and Lothrop.

The production staff–Set Design by Carl F. Gudenius and Costumes by Debbie Kennedy–Sound Design by Frank DiSalvo Jr. and Steven Carpenter create a wonderful world of old tyme radio–offering a peek into the wonderful world of stage radio presentations, with the added support of modern technology. Direction by Laura Giannarelli balanced full acting with the radio realm nicely.

There is always a debate over realistic radio broadcast vs a stylized one, but heck, it is the holidays. And knowing the story actually enhances the experience.

A message this good can be retold again and again.