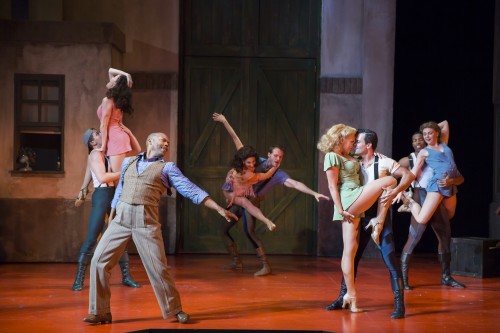 The company of Kiss Me, Kate, directed by Alan Paul at the Shakespeare Theatre Company. Photo by Scott Suchman.

If you have ever enjoyed a good old Hollywood Classic musical and love Shakespeare–or are simply thinking you might try to check out this Shakespeare thing, then Shakespeare Theatre Company’s newest production, Kiss Me, Kate, should be right up your alley.

…a feast of delight…

Set in Baltimore’s 1940s backstage theater scene, the story follows the divorced, show-stopping duo Fred Graham (Douglas Sills) and Lilli Vanessi (Christine Sherrill) as they struggle to put on a musical version of Shakespeare’s The Taming of the Shrew while dealing with the refuse of their failed marriage and not-so-dormant feelings towards each other, the romantic entanglements and misguided maneuvers of their cast, and some pretty hysterical gangster goons who come to collect on a faked IOU.

From the moment of curtain up until the last bow, the production was just a feast of delight. With the dynamic, glittering, and fun qualities reminiscent of classics like White Christmas and Singing in the Rain, the show sweeps you off your feet and fills your senses through music, dance, set, lighting, and costumes alike. Then there are the characters and the actors, and the actors acting as characters within the show, taking an already fabulous production up to the next level yet.

Eerily similar to the characters of Katherine and Petruchio they are staring as in their production, Lilli and Fred have a contentious relationship filled with lots of shouting, threats, and impassioned violence. Sherrill and Sills do an excellent job commanding the roles not only of Lilli and Fred, but also of Kate and Petruchio–and moreover, Kate and Petruchio as played by Lilli and Fred. It’s not every day that a couple of actors get a second chance at love and can work through their real feelings for one another while under guise as some of Shakespeare’s most celebrated (and equally contentious) characters.

In fact, much of what makes Kiss Me, Kate such an enjoyable production is this continual sense of juxtaposition and comparison. You get old love (Sherrill & Sills) vs. young love (Alves & Hurder), 1940’s Baltimore vs. Shakespeare’s Padua, the glamorous spotlight of stage and stardom vs. the back-alley behind-the-scenes rehearsal and acting life, and even public face vs. how one behaves inside, alone. Moreover, all of this is conveyed through brilliant set design, the actors themselves, choreography, and Cole Porter’s beautiful music.

Everyone can really sing and dance and act AND do Shakespeare in this production, and they do it all really quite well. Young lovers Lois Lane (Robyn Hurder) and Bill Calhoun (Clyde Alves) have some fun together in numbers like “Always True to You in My Fashion,” and Sherrill’s “So in Love” number, later reprised by Sills, gave me some chills. “Brush Up on Your Shakespeare” had me cracking up in my seat, and “Another Op’nin’, Another Show,” painted a fun, broad stroke of theatrical life backstage. My personal favourite number was the ensemble’s performance of “Too Darn Hot,” which rolled out in the back alley scene and was so sizzling, so tantalizing, you really couldn’t tear your eyes away.

Of course, anyone familiar with Shakespeare’s The Taming of the Shrew knows that some pretty serious gender issues arise, and even if you aren’t familiar, a phrase like “shrew-taming,” the demand to “kiss me, Kate” could raise some eyebrows. Kiss Me, Kate, as a show set in the 1940s and revolving around divorce and remarriage, does soften some of the problems in Shakespeare’s original play itself. As a production of 2015, however, I was a little disappointed that the show did not address the gender disparity a little better and challenge us in our modern-day questions surrounding consent, and feminism when the material is all there and simply laughed away. It seemed like something Shakespeare would do.