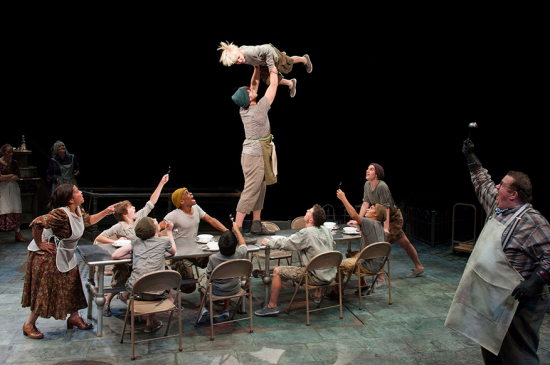 Cobblestones. Train tracks. Sewer grates. Each of the exits of Arena’s round stage featured a different piece of street life in London. The catwalks below the lighting formed an X and were designed as London Bridge. Everything looked like a Dickens novel, that is, until you noticed the boom box. Director Molly Smith modernized Oliver! to connect his story with the modern stories of homeless youth around the world.

A musical take on Charles Dickens’ classic Oliver Twist, Oliver! tells the story of misfits on the streets of London. The show centers on the life of Oliver Twist (Jake Heston Miller), an innocent young orphan trying to find his way. As he is shuttled from workhouse to funeral parlor to pickpocket hideout, Oliver meets a colorful cast of characters including shrill Widow Corney (Rayanne Gonzales) and shifty Fagin (Jeff McCarthy). In his search for love Oliver learns about sacrifice, friendship, and family.

As has come to be expected at Arena Stage, the high caliber of acting in Oliver! brought the show to life. Most impressive was how young, yet still professional, some of the actors were. Mohammed Badawi, Sebastian Gervase, and Ethan Van Slyke (Workhouse Boys/members of Fagin’s Gang) are all in middle school, while Jake Heston Miller (Oliver Twist) is only in fourth grade.

The choreography (Parker Esse) maintained the show’s energy and immediately drew in the audience. The incorporation of plates and chairs in “Food, Glorious Food” was reminiscent of STOMP and quite literally opened the show with a bang. After intermission, “Oom-Pah-Pah” combined swing, flamenco, and more modernized dance to powerfully begin the second act. Additionally Esse wisely choreographed to feature some of the cast’s accomplished dancers. Kyle Coffman (The Artful Dodger), an original Broadway cast member of Newsies and in the 2009 revival of West Side Story, clearly brought his experience and talent to Oliver!, and Esse ran with it.

Although each part of the production was wonderful, Colin K. Bills’ lighting design was especially superb. At the top of the show the lights are bluish gray, shifting over the actors like the shadows of a city. In company scenes a soft spot often follows Oliver so the audience does not lose him in the crowd. Bills also uses lighting to mirror the actors’ emotions like when the lights fade eerily in the funeral parlor as Oliver goes to sleep among the coffins. However, the most spectacular lighting was the brilliant sunrise at Fagin’s hideout. Oranges and pinks streaked across the stage as another day began.

Classics like “Consider Yourself” and “Be Back Soon” will leave you humming along hours after you’ve left the theatre, while the incredible vocals of Rayanne Gonzales and Eleasha Gamble will just leave you breathless. Arena’s Oliver! thoroughly deserved the standing ovation it received from Wednesday night’s audience.

Running Time: Oliver! runs for about 2 hours with a 15-minute intermission.