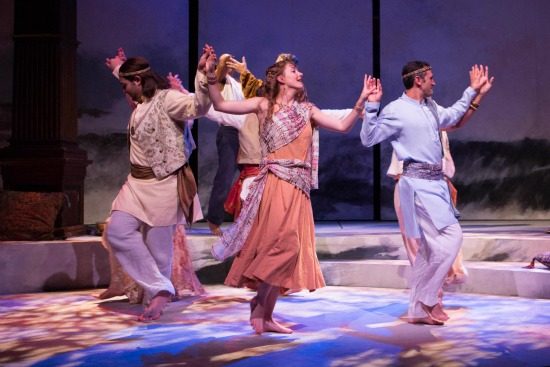 Zlato Rizziolli, Emily Serdahl, Michael Gabriel Goodfriend and others dance during the festivities in Pericles. Photo by Teresa Wood

The production of Pericles at the Folger Theatre is full of magic, humanity, joy and sorrow. It is a delight to watch and a reminder of all that makes live theatre worthwhile. Shakespeare’s Pericles follows the journey of the eponymous Prince of Tyre, from young upstart in Antioch to old man in Mytilene. If this sounds like a straightforward journey, however, I have misled you. Along the way he confronts incest in a foreign land, flees multiple countries in fear of his life, finds a wife, has a daughter, loses a wife, loses a daughter, and all of this before one of the character is raised from the dead, and a supernatural vision of the goddess Diana intervenes. This is not an ordinary journey. If the play is, in some senses, about our common human journey through the cycle of life, death, and rebirth, Pericles’ journey is an uncommon example ‘in extremis.’ The thrilling combination of the mundane and the fantastical at the heart of the play is beautifully captured on stage in Joseph Haj’s production from the Oregon Shakespeare Festival.

If you’ve not seen a production of Pericles, you’re probably not alone. I happen to belong to an even rarer category of person who has been in a production of Pericles, and must confess that this is the first production I’ve ever actually seen. It is also the first time the show has been on the Folger stage. This should, however, be an incentive rather than a deterrent. Like a precious gem, its rarity makes its charm even more valuable. Haj confronts the play’s rarity in his notes, acknowledging that it baffles scholars and critics by its “refusal to fit into traditional orthodoxies of what constitutes a well-made play.” He then rightly points out that its failure to fit our expectations can hardly be considered a failing of the play. It’s not. He observes that Pericles is “a playful, funny, moving and powerful meditation on what it is to be human”. His production repeatedly proves the truth of these words, in every delightful detail. If your sorrows cannot be cured by an evening with this production, then you might need a cure that theatre can’t provide.

The show boasts an outstanding ensemble of players. Wayne T. Carr’s Pericles is unwavering. He effortlessly manages the shift from Hamlet to Lear that the passing of time and geography demands of him; at once vulnerable and compelling. Brooke Parks’ Thaisa and Scott Ripley’s Simonides conjour a father-daughter relationship that will leave you with a smile long after leaving the theatre, not just for its explicit comedic impulse, but also for its impeccably observed authenticity. Jennie Greenberry’s Marina is strong and sympathetic,  while Armando Durán’s Gower has authority and warmth as befits a bardic narrator.  Michael J. Hume’s performance rises to the exceptional heights set by Raquel Barreto’s costume design for the Bawd.

The scenic design by Jan Chambers is immediate and powerful. Tactile clouds hover around the theatre, and an image of the sea dominates the stage, as it will the action. Chambers’ design is brought to life by Rui Rita’s lighting and Francesca Talenti’s video design, particularly when Pericles finds himself at odds with gods and weather (invariably one and the same). The music and lyrics, contributed by Jack Herrick, are an effective and lovely additional texture to the folk tale feel of the production, as is the movement from Sarah Lozoff.

For a story so interested in death and revival, it is interesting that the play itself has been through such a cycle. Wildly popular in its day, it has become less so over time. Let’s hope, however, that like the fortunes of Pericles himself, we are heading towards its complete revival. This magnificent production demonstrates exactly why it should be revived, and what we would be missing if we were to ignore this little-known gem. It is a play which sets out, in its opening line “to sing a song that old was sung.” This production sings that song with a clear and elegant voice, from its past into our present, and I urge you to grab your chance to listen.

Running Time: 2 hours and 20 minutes with one 15-minute intermission.

Advisory: Language. Recommended for ages 10 and up. Comedic scene in a brothel.