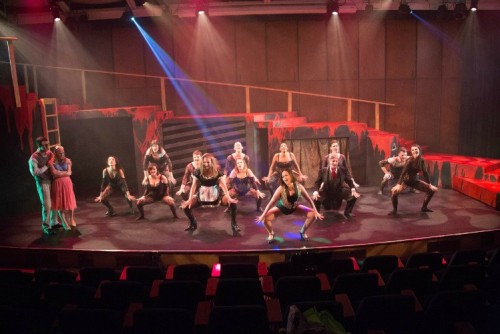 The cast of “The Rocky Horror Picture Show”. Photo courtesy of the Georgetown Gilbert & Sullivan Society.

Wednesday night was the opening night of The Rocky Horror Picture Show in the Hart Auditorium of the Georgetown University Law Center. Wait, you didn’t know that the Georgetown Gilbert & Sullivan Society (GGSS) had a law school? Shame on you!

First, a history lesson. In February 1973, a group of intrepid Georgetown University Law School students, family, community members, and professors undertook a performance of Gilbert & Sullivan’s one act comedic opera Trial by Jury (get it?). And afterwards, they decided to just keep performing. Simple? Lawyers, the surliest of beasts, well known for their truckloads of free time, have lovingly and defiantly preserved GGSS for themselves and their community for over 40 years. How do they do it? Perhaps Hogwarts does exist and they’ve gotten their hands on Hermione’s Time-Turner. Yes, I like that scenario!

…a society who can truly thrill and chill.

The Rocky Horror Picture Show is a ‘70’s musical horror film satire about a goody-goody, newly engaged couple that end up at the castle of an alien scientist from Transsexual, Transylvania. The Rocky Horror Picture Show is a cultural phenomenon whose traditions have made their way into the fabric of our culture. For many, their first live performance is a right of passage. I saw my first live performance when I was 16.

The Rocky Horror Picture Show is hands down my favorite musical ever in the history of the whole wide world. In the case of GGSS, it requires a diverse cast of unpaid actors who are willing to hang out partially naked onstage for at least two hours. Happily, GGSS opted to courageously confront the sexuality and ostentation of The Rocky Horror Picture Show. See-through lace leotards and a wide range of exposed undies graced the stage for almost two hours. The cast exhibited true professionalism and remained in character for the entire performance. As my dad would say, they have gumption.

Now we need to talk about Jimmy Gatliff (Dr. Frank N. Furter). He left me antici…pating more, more, more. His demeanor, vocal work, and acting chops are professional level, a sympathetically crafted creature of the night. And he does it all in 5 inch heels. I imagine Tim Curry would be proud. I’d also like to thank Gatliff for singling out my husband for a titillating moment of crowd interaction.

Emily Krulewitz (Janet!/Usherette) (Brad!) has one of the strongest presences and voices on the GGSS stage. Whether dancing in his underwear or fully clothed, Alex Bassett (Brad!) (Janet!) had me in stitches. Everyone, from the agressively sexual Magenta (Rachel Kuenzi) and the tap dancing glitter-bomb Columbia (Sara Collins) to a chorus member who was featured doing a lovely pirouette, had their moment in the spotlight.

No doubt, GGSS’s The Rocky Horror Picture Show is at its best when the entire cast is assembled onstage. Ensemble numbers, particularly “Time Warp” and “Rose Tint My World,” sizzle and pop with GGSS’s unique brand of eccentricity and charisma.

With limited resources, Director Clare Schaffer, Set Designer Jeffrey Asjes, and Lighting Designer Jonathan Zucker (among so many others) have created a fully functional, multi-leveled laboratory. The cast nimbly scampers between levels, most of them in heels. Strobes and haze effects are effectively employed to create an eerie and other worldly atmosphere.

If you’ve missed The Rocky Horror Picture Show make your way over to the Georgetown Law Center this 2015/16 season. Support GGSS, a society who can truly thrill and chill.