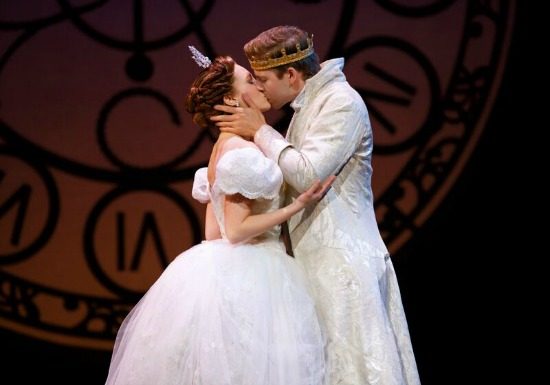 Many have told the tale of Cinderella, but not quite like this. Rodgers + Hammerstein’s Cinderella is appropriately titled because it is a version all its own—and thankfully so. Not only is the piece cleverly-written, it is also delightfully executed by a stellar team—on, and behind, the scenes.  The few times I managed to gaze around the theatre, all eyes were on the stage.

…why not enjoy Broadway in our own backyard…

Kaitlyn Davidson (Ella aka Cinderella) and Andy Huntington Jones (Topher) have excellent chemistry in developing the well-known story of the ill-treated, yet tenderhearted young woman, seeking simple joys under the tyranny of her evil (but incredibly hilarious) stepmother, Madame, played brilliantly by Blair Ross. Even though Cinderella has a chance encounter with Prince Topher beforehand, she knows it will take more than a good heart to capture the eyes of the powerful man whose vision is clouded by the overwhelming responsibility of his new position. The journey to the unlikely love connection is a classic tale with an entertaining, multi-faceted and multidimensional, spin.

The production is clad with comedic relief at every turn, ranging from cute and innocent to audacious and precise. There is one point where Cinderella expresses her surprise that “Crazy Marie” (Liz McCartney), one of my absolute favorites in this production, is actually the fairy godmother. Marie replies to Cinderella’s puzzlement by saying, “You’d be surprised at how many crazy women there are in beautiful gowns.” Priceless.

Mark Brokaw’s direction is impeccable, and the ensemble is more than a lively backdrop—they keep the tempo of magic afloat. The score is perfect in length and delivery—making this a musical for those who may declare themselves non-musical lovers (like me). To be sure, I LOVED this production! With just the right amount of dialogue, song and non-verbal communication, this cast strikes the fine balance that some musical theatre productions lack.

As for the set and costumes, words and photos cannot adequately capture the brilliance and skill in the execution of both. William Ivey Long (Costume Design) and Anna Louizos (Scenic Design) are genius in creating the world before the production ever begins. The costume changes garnered gasps from the audience on several occasions, and had my seven-year-old goddaughter blurting out, “HOW DID SHE DO THAT?!”

All in all, this production is a magical experience! It’s great fun for families and adults, to be sure. And since it’s the holiday season, and you may not make it to New York, why not enjoy Broadway in our own backyard? I promise, you will thank me for it.

Advisory: Recommended for ages 5 and up.