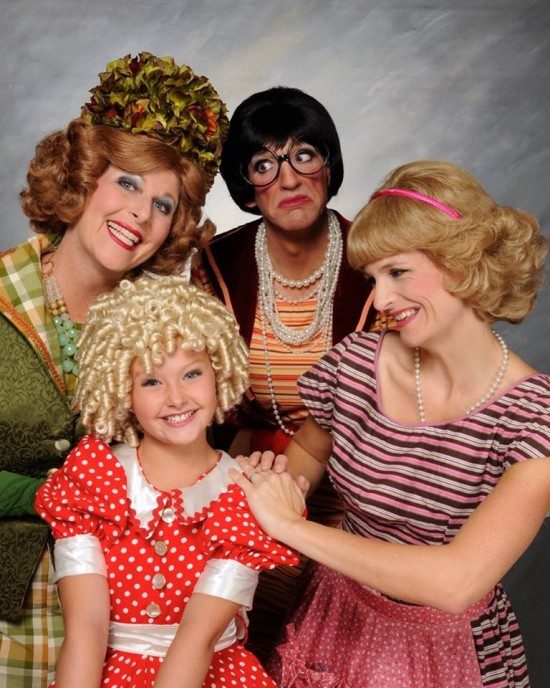 Sylvia St. Croix, a talent agent, knows all too well the highly competitive nature of show business.  In fact, it can be downright ruthless!  In the musical farce, Ruthless! The Musical,  Sylvia St. Croix begins the play by explaining to the audience that a wife and mother named Judy is “leading an idyllic suburban life.  And, although Judy has absolutely no talent whatsoever, her only child, her daughter Tina, has been blessed with a great deal of talent. Blessed, or dare I say, cursed!”

…blessed to have a top-notch cast as well as top-tier production values.

This hilarious musical with music by Marvin Laird and book and lyrics by Joel Paley pays homage to dozens of movies including Gypsy, The Bad Seed, Valley of the Dolls, and All About Eve.

Directed by John Desmone, Dundalk Community Theatre’s production of Ruthless! The Musical is blessed to have a top-notch cast as well as top-tier production values.  And this community theatre accomplished all this without having to be ruthless and stab anybody in the back.

The same can’t be said for an 8-year-old aspiring child-actress named Tina Denmark who will do ANYTHING to play the lead in the school play…. ANYTHING!  In this production, Kaitlyn Wise is “Born to Entertain,” playing the role of Tina with a Shirley Temple-like persona.  But don’t let her curly golden locks and Pepsodent smile fool you!  Kaitlyn is also quite good at being “The Bad Seed.”

It is interesting to note that the original production of Ruthless! launched the careers of child stars who played (or understudied) the role of Tina, such as Britney Spears, Natalie Portman and Laura Bell Bundy.  It helps that Joel Paley wrote such a devilishly well-crafted role where the actress has to not only be a triple threat, but also threatening!

In Act One, Tatiana Dalton as Judy Denmark reminds me of a wholesome housewife from the 1950’s.  Judy is perfectly happy just being known as “Tina’s Mother.”  Without giving any surprises away, Judy has another side to her like her daughter Tina.  Tatiana Dalton skillfully tackles the necessary character changes, making it quite believable that the apple doesn’t fall far from the tree.

Brian Jacobs is bursting at the seams with talent as Sylvia St. Croix.  He created much buzz when he first appeared on the stage with audience members whispering to one another, “Is that a man”?  It was hard for everyone to tell that Sylvia was played by a man at first because of Brian’s feminine mannerisms and James J. Fasching’s campy, yet convincing, costuming.

The rest of the cast did a fantastic job as well with Jamie Miller as Myrna Thorn and Miss Block; Kelly Rardon as Louise Lerman and Eve; and Shannon Wollman as Lita Encore, a drama critic.

Running Time: Approximately two and a half hours, including a 15-minute intermission.

Ruthless! The Musical played through November 8, 2015 at the John E. Ravekes Theatre at the Community College of Baltimore County Dundalk – 7200 Sollers Point Road, in Baltimore, MD. For tickets and information about future productions, call the Box Office at (443) 840-ARTS, or visit online.