Theatre Review: ‘The Cripple of Inishmaan’ at Scena Theatre 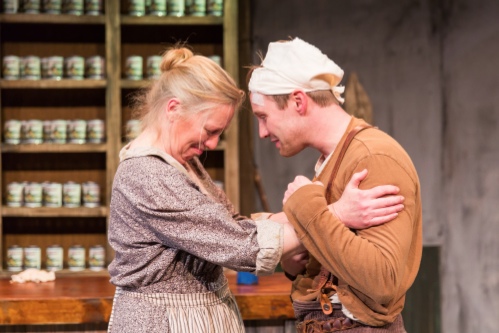 Nanna Ingvarsson and Josh Adams in The Cripple of Inishmaan. Photos by Jae Yi Photography

It hangs thickly in the air, waiting to be uttered by daft, supremely non-pc denizens of the isle of Inishmaan, a beautifully desolate place on Ireland’s western coast. As if his given name, and thus his identity, the title character is casually referred to as ‘cripple Billy.’ When in the third person, he’s just ‘the cripple.” A name, thus an identity.

Wonderful theatre as it raucously explodes scenes and turns sensibilities on its head.

In Scena Theatre’s The Cripple of Inishmaan, the savagely dark comedy by master storyteller Martin McDonagh, we meet Billy, a kindly soft-spoken soul who is silently experiencing the misery of his sheltered life of little opportunity. Josh Adams’s Billy is a body-twisting contortion as he ambles across stage, dragging one foot, one arm locked against his chest, clutching a sad inner countenance and dealing with a constant reminder that he is different, and will always be dependent on others. He made us ache, but not pity him. Great work.

Oh, did I mention this is a lose-your-drink-in-a-spurt-up-your-nose comedy?

McDonagh, a playwright of international acclaim (The Pillowman, The Lieutenant of Inishmore) has a gift of character craft that is simply stunning. He relishes fashioning a story of the old sod and has mined the rural areas of Ireland for ideas several times.

First and hilariously foremost are Billly’s doting foster aunties, the shopkeepers Kate and Eileen Osbourne, a pair of clucking busybodies that in their grievous glances and gobsmack setups are a wonder. Helen Hayes Award Winners Nanna Ingvarsson as Eileen and Jennifer Mendenhall as Kate man their stations while keeping up with the local goings on, supplied by the huckstering, walking newspaper of gab, Johnnypateenmike. It is 1934 and the old life is still intact. Matt Dougherty plays the gossip with the wonderful sounding name in a fanciful role, trading juicy gossip for food, and blessedly, giving us a guttural west Ireland inflection, away from the Dubliner accent we are used to.

The day-to-day dreariness is broken by big news–the inhabitants learn of a Hollywood film crew’s arrival in neighboring Inishmore to make a film about island life. Billy, sees it as his chance to experience something different and possibly leave the poverty and boredom of Inishmaan. Showing his resourcefulness he hatches a plan to get there and to everyone’s surprise, the orphan and outcast gets a part in the film.

Change enters the little hamlet, affecting the applecart and the eggcart. There’s the Aunties, who are heartbroken, the garrulous Babbybobby (Christian Sullivan), a no-nonsense type played with commendable intensity. And the nightmarish vixen Helen, foul-mouthed local gal who is a temptress of Priests and a terror with eggs and other projectiles. Megan Dominy’s Helen, at times deft and dangerous, was a counterpoint to Billy’s introverted sensitive nature. Her scenes with her brother Bartly a dutifully bruised Kevin Collins, reflected the absurdist nature of people cooped up on an island too long together.

Secrets eventually come out and there is a gradual breakdown of the laughter or hardness that they use to shield themselves from their pain—loneliness, detachment, boredom. McDonagh makes these folksy characters’ behavior and conversations snap with both wicked laughter and wise insights about the people who love and help us, also hurt us.

Director Robert McNamara’s production showed deft touches in material that is both far-ranging and isolated and small. His understanding of international dramatic world views is evident in this and other Scena works. The small efficient set is nicely multifunctional and simple.

Laughing at a cripple? Shame on you. Wonderful theatre as it raucously explodes scenes and turns sensibilities on its head.

Advisory: Some language that would make a respectable Irishman blush.