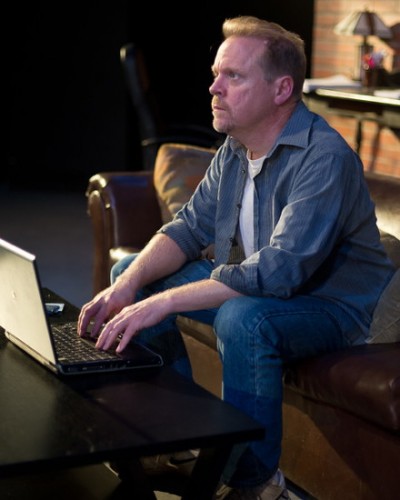 As intriguing as its premise, The Metal Children, a play by Pulitzer Prize nominee (not for this work) Adam Rapp lacks subtlety.

If vigilantes wearing pig’s masks who terrorize people they disagree with aren’t obvious, another giveaway is the last name of the protagonist (hero to some, villain to others) Tobin Falmouth. He states emphatically at the fiery school board meeting somewhere in “a small town in the American heartland,” after his young adult novel is banned by the board, that his name is pronounced “Fall-myth.” But we all know how many people will hear it.

The Metal Children, also the name of the book within the play, gives audiences a lot to think about. But it also throws in the kitchen sink. Not only is the town on the verge of hysteria, but also it is falling prey, in the most-macabre way, to copycat events from the novel–a rash of deliberate teenage pregnancies, a suicide, and at least one attempted murder on top of the terrorist acts.

Falmouth’s personal life is as messy as his apartment: his writer wife left him for her editor; he has sunk back into drug use of pain killers, is having a meaningless dalliance with a slovenly neighbor, and can’t finish his next book.

…with fine casting, terrific acting, and its truthfulness to The Metal Children’s many shades of meaning.

Perhaps the over-the-top quality is deliberate—the New York Times called the play a “comedy-drama.” Rapp was influenced by his own encounter with literary controversy. One of the young adult novels he penned was removed from the curriculum of a school in Pennsylvania.

There are surprises. At first we assume the play is strictly on the side of art and freedom of expression. But Rapp upends that viewpoint as the writer realizes unexpected consequences and finds peace through a morally wrong act.

If the playwright intended The Metal Children to be humorous, the production at Silver Spring Stage doesn’t quite get the point across. There are some funny moments, such as the first scene, when sleazy (but ultimately caring) agent urges Falmouth to be a more enthusiastic about the video testimonial he’s preparing for the school board. Or when the author discovers that the teacher “Stacy” who turned him on via her impassioned letter in his defense is a man.

But the production, directed by Sarah Scafidi, more than compensates with fine casting, terrific acting, and its truthfulness to The Metal Children’s many shades of meaning.

Appearing in every scene, Kevin Dykstra as Falmouth carries the play capably. He’s terrific as the cynical yet idealistic writer. You can literally feel his world-weariness weighing on him, covering up a newly discovered sensitivity.

One of Scafidi’s strengths is choosing actors who can portray multiple contrary characters. Shelby Sours is both the promiscuous neighbor as well as the uptight school board member preaching hell and damnation. Richard Fiske excels as the flamboyant agent as well as the strong-voiced but unfair school board chair.

Alison Donnelly has the right look and manner for the highly intelligent but selfish and irrational Vera Dundee, a 16-year-old student who seduces Tobin not for his own sake.

Brendan Murray arouses our sympathy as the lonely teacher, Stacy Kinsella, who comes to Falmouth’s defense but almost loses his life over it.

Samantha Sheahan plays the triple parts of Kong, Tami Lake, and Boy “X,” while Kelsey Murray (Brendan’s daughter in real life) is both Cooper and the Nurse.

It’s a shame that Paulette Lee, fine as the nosey hotel manager, isn’t given more stage time. She plays the one townsperson who’s ambivalent about the proceedings and is also having fun.

The Halloween Eve audience was smaller than might have been expected. But it expressed enthusiasm for the performances—if, also, bafflement for the play itself.

Sets are one of Silver Spring Stage’s recurring strengths. Designed by Austin Byrd, who also was master carpenter, they are efficiently converted from a big-city apartment to small-town hotel to school to hospital.

Fight choreography, crucial in the show, is by Christian Sullivan. Paul Callahan is lighting designer; Niosha Nawab is sound designer; and Robert Croghan designed the costumes, makeup, and hair.

Running Time: Two hours and 20 minutes with a 10-minute intermission.

Advisory: For 15 and up. There is language, sexual content and violence, and a lot of talk about unwed pregnancies.