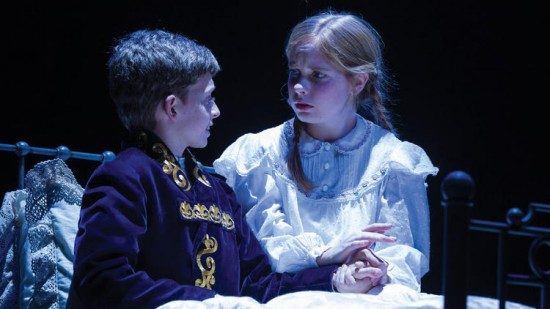 Anthony Frederickson as Colin, Caitlin Cohn as Mary in “The Secret Garden” at Center Stage. Photo by Richard Anderson.

Similar to Shakespeare’s famous quote “All the world’s a stage,” Frances Hodgson Burnett’s 1911 novel The Secret Garden proclaims that “If you look the right way, you can see that the whole world is a garden.”

Baltimore’s Center Stage brings The Secret Garden to life in a musical, with book and lyrics by Marsha Norman and music by Lucy Simon.  A few stand-out songs include “Lily’s Eyes,” “The Girl I Mean to Be,” and “Wick.”

…a heartwarming and enchanting musical for the entire family.

Directed by Marcia Milgrom Dodge, the story is about newly orphaned Mary Lennox (Caitlin Cohn) who arrives at her uncle Archibald’s manor house in Yorkshire, England to escape a cholera outbreak in India. Young Mary is surrounded by members of the household who are dealing with their own plagues; Archibald Craven (Kevin Earley) is grieving from the loss of his wife, Lily (Brandi Burkhardt) a decade earlier; his brother Dr. Neville Craven (Adam Monley) is still bitter that Lily chose Archibald over him; and Archibald’s son, Colin (Anthony Frederickson) is bedridden, on the heels of death with a heart condition.

Mary is befriended by a chambermaid named Martha (Charlotte Malby) and her brother, Dickon (Cameron Bartell).  Soon, with the help of her new-found friends, Mary finds the key to happiness by bringing new life to a neglected secret garden.

The neglected garden, of course, serves as a metaphor for how the characters are neglecting themselves and others.  The moral of the story is that if you put love into it, then it will grow into something beautiful. And that is no secret.

What I also like about this adaptation of the story is that there is at least one character or circumstance for people of all ages to relate to and enjoy.  While the production is family-friendly enough, it should be noted that the story includes themes of abandonment, loss, death and mourning.

Performance wise, the two young performers, Caitlin Cohn as Mary and Anthony Frederickson as Colin, serve the characters well.  Even though Caitlin Cohn is actually an undergraduate student at NYU, her performance is so convincing that she is entirely believable as a 10-year-old.  Her “secret” age, I’m sure, gave her an edge with her maturity and acting experience level in being able to grasp and deliver such a fine,  multi-layered portrayal.  Anthony’s Colin strikes a fine balance between being an unlikable stubborn boy who throws temper tantrums with being a boy that you really want to see walk again and have a better relationship with his father.

Set designer Narelle Sissons chose to have enormous, handwritten pages, hanging and stacked on the floor, serving as the actors performance area.  As far as the garden, Sissons’ approach was more symbolic in nature, having miniature trees that blossom into rose bushes.

Music director and orchestra arranger Sariva Goetz has a live 7 piece orchestra, featuring 2 keyboards, 2 reeds, French horn, bass, and percussion.  While the sound delivered was very nice, the instrumentation would have greatly benefited from having a live string section.

Overall, Center Stage welcomes the audience into The Secret Garden in a heartwarming and enchanting musical for the entire family. Indeed, director Marcia Milgrom Dodge makes us observe and understand that “the whole world is a garden.”