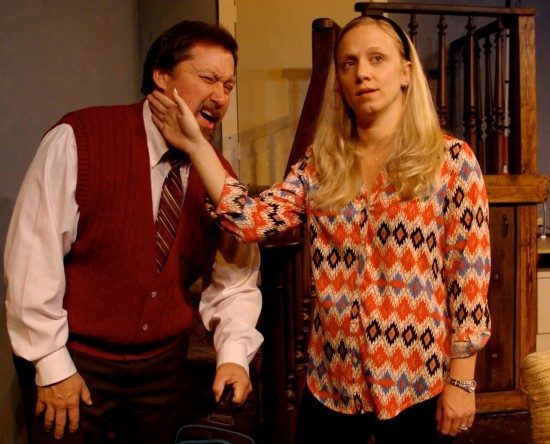 Wait until Dark by Frederick Knott, is a suspenseful mystery now playing at the Church Hill Theatre in Queen Anne’s County.

Wait until Dark is about a sinister con man, Roat, and two ex-convicts, Mike and Carlino who are looking for a mysterious doll.  They have traced the location of it to the Greenwich Village apartment of Sam Hendrix and his blind wife, Susy. Both Sam and Suzy do not know that sewn inside the doll is several grams of heroin. Now when Sam leaves town, and Suzy is left by herself, the men now hatch a plot to find the doll while Suzy is in the house. But with the help of Suzy’s neighbor’s child Gloria, The two find a way to outsmart the con men.

… will leave you on the edge of your seats!

This play can be described in the old saying “slow and steady wins the race.” Act one built suspense gradually and continued to do so as the plot progressed. The second act will leave you on the edge of your seats!

Even though this show is not very well known outside of the 1967 Audrey Hepburn film, this story can still be as suspenseful as it was back then. Most of the suspense came from the brilliant direction of CHT’s longtime director Bonnie Hill, whose past shows include Vanya & Sonia & Masha & Spike, Is He Dead?, and Over the River and Through the Woods. Her staging was phenomenal right down to the tense last twenty minutes where it is completely dark on stage except for a couple of matches.

The set built by Carmen Grasso fit the small stage, and even made it look bigger. With period appropriate props and costumes, all aspects of this play felt well executed.

The actors especially made this play come alive. All of the actors seemed to fit their roles well, and no actor overpowered the others.

Becca Van Aken who played Suzy the blind women, really makes you believe that she is blind. I was drawn into her performance as I watched her leading with her hands, touching everything, and even her posture. Matt Folker who played Mike (the main con man) also gave a believable performance.  Nic Carter who plays Sgt. Carlino, gave the audience a bit of a comic relief in the first act but was also able to be a terrifying menace. Paul Briggs plays the deadly con man who is behind the entire operation, Harry Roat. He gives off a completely maniacal performance that makes me NOT want to meet him in person.

But the real MVP of the play was ten year old Thea Daly who played Gloria. Thea pestered Suzy through the first act, leaving the ice box open, or sneaking in and scaring her. But once act two came around and Gloria began to realize what was going on, she stole the show.

Something about this show stuck out to me, whether it be in the writing or the staging. Sneaking into a blind women’s apartment while her husband is away, seems like the perfect crime. Until you realize that even blind people can sense movement and things going astray in their homes. You could definitely tell that this play was well rehearsed and directed. Church Hill Theatre might require a drive for some, but if you have the time to see Wait until Dark, I highly suggest you do, but don’t wait until time runs out.