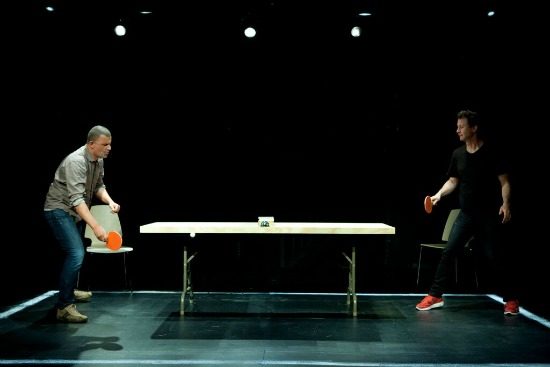 Marcus Youssef and James Long in Winners and Losers. Photo by Simon Hayter.

Is the month of January a winner or a loser? How about microwave ovens or shag carpets? If you want the opinion of two Canadian comedian playwright performers (also professors, essayists, journalists, and directors), Winners and Losers is the game show drama format you’ve been longing for. As the woman walking down the stairs in front of me pointed out to her friends, “the great thing about Woolly Mammoth is that they give you things to play with.”

Marcus “verging on good-looking” Youssef and James “Jamie” Long, supported by the design minimalism of Director Chris Abraham and Lighting Designer Jonathan Ryder, keep it casual. They appear onstage, sit down at a lone table, and start debating seemingly random topics. Relatively interactive, the house lights stay dim and Marcus and Jamie respond to audience members who freely voice their opinions. Being in DC, as Marcus and Jamie joked, this audience has A LOT of opinions. We all laughed at this.

Winners and Losers morphed out of an exercise Marcus and Jamie used to write a proper play about two competing Russian men. Utilizing a Russian accent, the exercise began by innocuously debating lists of people, places, and things. By the end the two men are metaphorically picking clean each other’s bones. Unfortunately for us, the Russian accent is lost to time but Winners and Losers was born.

Marcus and Jamie are charismatic and naturalistic onstage. I found their format engaging. I even responded verbally to them once or twice (audience participation is not my thing). Unfortunately, there was no intermission, which I always find challenging. That being said, the fluidity of the performance would have been interrupted by an intermission and I’ve been wracking my brains to figure out where an intermission could even have occurred. Rest assured, Winners and Losers is well worth the wait for the restroom or the bar.

Largely creative and lovingly crafted, Winners and Losers clearly encapsulates a genuine friendship born from deep introspection and empathy. But last night, I longed for more spontaneous moments. Perhaps they were just nervous, so let’s not hold that against them. I have a feeling Marcus and Jamie will only pick up steam onstage at Woolly Mammoth.