“Packed with big laughs and tons of talent, Zombie Prom is so much fun you won’t want the show to end.” – Lynne Menefee.

Synopsis: This girl loves ghoul rock and roll Off Broadway musical is set in the atomic 1950s at Enrico Fermi High, where the law is laid down by a zany, tyrannical principal. Pretty senior Toffee has fallen for the class bad boy. Family pressure forces her to end the romance, and he charges off on his motorcycle to the nuclear waste dump. He returns glowing and determined to reclaim Toffee’s heart. He still wants to graduate, but most of all he wants to take Toffee to the prom. The principal orders him to drop dead while a scandal reporter seizes on him as the freak du jour. History comes to his rescue while a tuneful selection of original songs in the style of 50s hits keeps the action rocking across the stage. 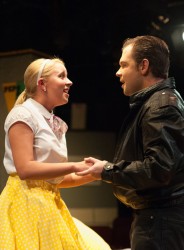 Allison Comotto as Toffee and Alex Cecchetti as Jonny. Photo by CMAldridgePhotography.

2. The Night Alive at Round House Theatre.

“The play contrasts the pain of being alone with the pain – and senseless violence – of being together… The Night Alive at the Round House will not disappoint. – Chris Williams.

Synopsis: Tommy is a down-and-out bloke on the outskirts of Dublin. Between dodging his estranged wife and planning his next get-rich-quick scheme, there’s not much to look forward to. But after he saves a woman from a violent attack, they’re both forced to sift through their messy pasts in search of a glimmer of hope. From the author of The Weir and The Seafarer comes the stunning Irish drama the Chicago Tribune calls “raw and beautiful.” 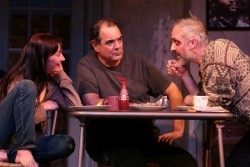 “…’Technicolor Life’ is as colorful as its title implies, saturated with different lives blending together.” – Mark Beachy.

Synopsis: Maxine, a book smart teenager, is caught between her older sister, a wounded soldier who just returned from the war in Iraq, and her ailing grandmother with a flair for American movie musicals.  With the help of her new imaginary friends—Lorelei Lee and Dorothy Shaw from Gentlemen Prefer Blondes—Maxine secretly creates a dating profile for her sister and successfully sets her up with another wounded vet. Life takes a turn when her grandmother announces she’ll be ending her life and wants her family to support her final wish by throwing her a good-bye party. With that, Maxine has to grow up fast. Rep Stage is honored to produce this world premiere as part of the Women’s Voices Theater Festival. 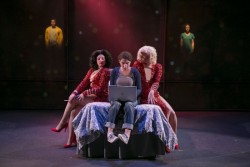 Synopsis: Is Kanye West a winner or a loser? What about the Berlin Wall? Or goat cheese? Old friends Marcus and Jamie spare nothing and no one in a seemingly harmless drinking game that separates the champions from the chumps. But what begins as a playful exercise slowly reveals itself as a dangerous unpacking of privilege, status symbols, and class divisions. 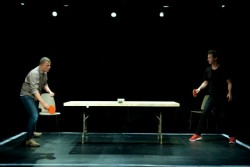 Marcus Youssef and James Long in Winners and Losers. Photo by Simon Hayter.

“…with fine casting, terrific acting, and its truthfulness to The Metal Children’s many shades of meaning.” – Barbara Trainin Blank.

Synopsis: The Metal Children is a timely, unforgettable drama about the failure of urban and heartland America to understand each other – and about what happens when fiction becomes a matter of life and death. After a school board in small-town America bans a young adult novel about teen pregnancy, an intense and violent debate erupts over abortion, religious beliefs, and modern feminism. When the novel’s directionless New York City author arrives in town to defend the book, he finds that it has inspired a group of local teens to rebel in strange and unexpected ways. The New York Times called The Metal Children a “provocative…tale of the dangerous ideological uses to which literature can be put, by its champions and its detractors alike.” Playwright Adam Rapp – whose Red Light Winter was a Pulitzer Prize finalist – has created a fiercely compelling play that deserves to be known and talked about. 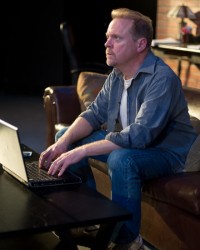