‘A Quick 5’ with Joshua Dick 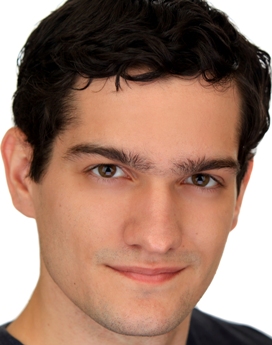 American University’s theatre program makes a big contribution to the DC theatre community. Today’s A Quick 5 column subject is a product of that very program. Joshua Dick has been seen around town at places like Adventure Theatre -MTC and Rorschach Theatre Company but this week and this week only he will be returning to Theater J for Stars of David: Story to Song. You’ll hear more about it in just a moment.

Joshua previously performed at Theater J in Our Suburb and was recently seen at Adventure Theatre-MTC in Garfield, The Musical with Cattitude. Other area credits include Big Nate and Spot’s Birthday Party at ATMTC, Carousel at Olney Theatre Center, Othello and Six Characters in Search of an Author at WSC Avant Bard, Flora the Red Menace, Parfumerie and Don’t Dress for Dinner at 1st Stage  A Man of No Importance at Keegan Theatre, She Kills Monsters at Rorschach Theatre Company and The Every Fringe Show You Want To See in One Fringe Show Fringe Show, which he also directed.

I said at the top that Joshua came out of American University’s Theatre program. We all know how hard the business is for a performer just starting out. As you can see, Joshua is doing quite well so far and I know there is plenty more to come from this young talent. Stars of David: Story to Song at Theater J is the perfect way for the family to enjoy a theatrical attraction together for the holidays. It features music and musings from some of show business’s biggest names and features a cast of high powered performers who among them, include Joshua Dick. He is another reason why the DC theatre community is so much fun to write about. He is about to jump into the NY theatre scene so here’s hoping those folks find out real fast what we already know. Joshua Dick = pure talent.

You are a product of American University’s Theatre Department. Did you know at an  early age that you were going to be a performer and what was it about  AU that made you choose it as your college of choice to study your craft?

I actually had very little interest in the theatre or performing at a young age. I was a very shy kid. To my mother’s credit, she took me to shows all the time and I did enjoy them, but it never really crossed my mind to get up on stage myself. But I did like to sing, I was in all kinds of choirs growing up, school, church, regional. My first experience acting was when I was a freshman in high school. It was a production of Godspell my church did to raise money for a mission trip. One of my best friends, who played Jesus in Godspell, then encouraged me to audition for the next school musical, Joseph and the Amazing Technicolor Dreamcoat (apparently I was typecast for biblical musicals). And I just fell in love with the process. A year later I played Malvolio in Twelfth Night and I was hooked. It was the first time I came out of my shell. I had found a mechanism for expressing myself. It’s that beautifully contradictory moment when stepping into someone else’s life and experience helps you understand yourself better. That was when I decided to go to college for acting. As far as choosing AU went, I really used my experiences auditioning for different programs to decide. Even in a brief audition and interview, I felt that the faculty at AU was going to give me the opportunity to grow, and at the same time, provide me new opportunities to explore new avenues. I was given ample opportunity to perform, but also to direct and design, positions I had never tried before but developed a real passion for. I became enamored with lighting design while I was at AU, and spent a great deal of time working backstage at the Greenberg Theatre (AU’s mainstage) and got the opportunity to design several department shows. Lighting design wasn’t something I knew I liked before I got there.

Can you please tell us everything we need to know about Stars of David: Story to Song ?

Stars of David is based on a book written by Abigail Pogrebin in which she interviewed dozens of famous Jewish performers, politicians, comedians, writers, philanthropists, and so on, about the effect of Judaism on their lives and careers. The show is a musical revue, with each song telling the story of one of these interviews from that interviewees perspective. For example, if you come see the show you’ll get to see the wonderful Sherri Edelen play Joan Rivers singing about how the only time she gets to relax is on the high holy days. There are fourteen songs, all written by different famous composers, such as Michael Feinstein, Sheldon Harnick, Jeanine Tesori, Duncan Sheik, and others. There are also spoken excerpts from the interviews between each song. The stories range from funny to heart wrenching, quirky to introspective. And as an audience member, coming from a Jewish background is certainly not a prerequisite; there are incredibly moving numbers that discuss finding religious common ground with others, combining one’s upbringing with the spirituality one finds later in life, and sharing one’s connection to beliefs with one’s children. Using Judaism as a lens, Stars of David is about how our beliefs shape our entire lives. 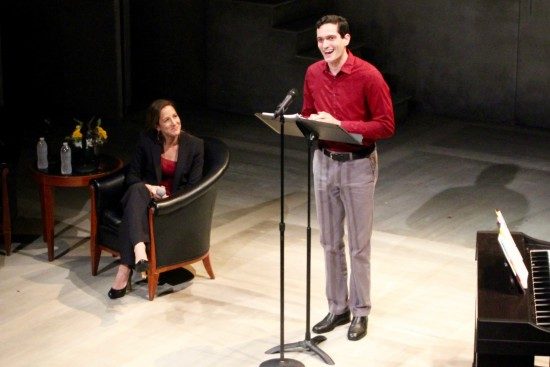 Joshua Dick singing for the author of the book Stars of David Abigail Pogrebin at Theater J’s benefit honoring her. Photo courtesy of Theater J.

You now live in NYC. What do you think are the biggest differences between performing in NYC and Washington DC.

Well, just to clarify, I am living in New Jersey for now, and I have been there for only about three months. But if all goes according to plan, I’ll be living in NYC early in the new year. I’m excited to see what’s different! I’ve been performing in DC for the past nine years, and even though I have popped up to New York from time to time to audition, I’m interested to see what it is like to immerse myself in that world.

Stars of David: Story to Song features writings by some pretty big name people. Of all the folks that are represented in the show who is your favorite?

This is an incredibly difficult question to answer, there are some really wonderful stories in the show. I personally perform songs as Leonard Nimoy (and his struggles dealing with antisemitism as a young boy), Aaron Sorkin (frustrated that the clever and witty characters he writes are perceived of as Jewish simply because they are clever and witty), Andy Cohen (reminiscing on his odd, often unhelpful bar mitzvah tutor), and Tony Kushner (exploring the similarities of being Jewish and being gay). But I’m actually going to answer this question with a different interviewee: the song based on an interview with Ruth Bader Ginsberg (performed by the amazingly talented Emily Levey) is a beautiful piece written by Tom Kitt and Abigail Pogrebin entitled “As if I Weren’t There”. The song tells the story of when Ginsberg was seventeen and her mother passed away. She was not allowed to chant the mourner’s prayer at her own mother’s funeral because of the traditional Jewish belief that only men can make up a minyan. The song is a gorgeously anguished expression that one’s faith could desert you at a time you need it most. Brings me close to tears every time.

What does 2016 hold in store for Joshua Dick performance wise?

Your guess is as good as mine! 2015 has been a year of total transition for me, moving away from DC being the most significant example. But I am also a brand new, proud member of Actor’s Equity, which opens some thrilling new doors for me moving forward. And on top of that, I will be starting classes at the City College of New York in February pursuing a degree in Applied Mathematics. This probably seems like an odd path, and you’re right. But I have thought for a long time about branching out and following some other interests. So with a new city, a new chapter, I thought I might try something completely different. The question for me as I move forward is how will I balance an acting career with such a step, and I’ll see, maybe I can’t. But as I’ve transitioned this year, leaving behind what was comfortable and familiar, I have developed a “bring it on” mentality. Life is strange. So to actually answer your question, what does 2016 hold performance wise? Nothing yet. But what does 2016 hold life wise? Plenty.