Opera Review: ‘Hansel and Gretel’ at The Washington National Opera 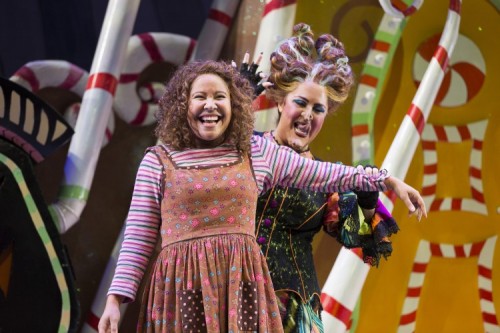 Ariana Wehr and Kerriann Otano in Hansel and Gretel. Photo by Scott Suchman.

Once upon a time, the Washington National Opera (WNO) staged Hansel and Gretel and this glitter aficionado and fairytale devotee loved it. Although it may be a tad sneaky to reel kids into opera with neon, monster-sized candy, and sparkle, Hansel and Gretel is a first-rate introduction to opera. Billed as a holiday opera, candy canes and gingerbread men reinforce a seasonal atmosphere.

Hansel and Gretel is a first-rate introduction to opera.

The traditional Hansel and Gretel is a Grimm brother’s fairytale about a brother and sister, Hansel and Gretel, abandoned in the woods by their wicked stepmother and father. A cannibalistic witch living in a candy-covered cottage tries to eat them but the kids survive by pushing the witch into an oven. If this doesn’t sound super kid friendly, that’s because it isn’t. The Grimm brother’s fairytales were meant to be didactic and it’s fair to say that at the turn of the 19th century, children were thicker-skinned. Less than a century later, composer Engelbert Humperdinck and librettist Adelheid Wette saw fit to dilute the horror and intensify the fantastical for their opera Hansel and Gretel. In the version that has trickled down to us no one is cooked and Hansel and Gretel rescue all the gingerbread children from the Witch. Humperdinck’s score is accessible and folksy and the melodies thematic and beguiling. Wette’s lyrics, translated into English for this production, are sincere, endearing, and memorable. The Sandman (Raquel Gonzalaz) and the Dew Fairy (Melissa Mino) are glitzy fairytale guest stars. The WNO’s Children’s Chorus makes a regretfully brief appearance at the end of the performance.

Hansel and Gretel at the WNO highlights current and former Domingo-Cafritz Young Artists. Aleksandra Romano is a charmingly masculine Hans. Bursting with wide-eyed boyish zeal, mezzo-soprano Romano sings out with the authority of a boy aspiring to be a man. Ariana Wehr’s Gretel is attentive and motherly, all dimples and teeth. Romano’s vocals are bombastic while Wehr remains bright and nimble. Their vocals have a complimentary give and take, reinforced by a brother/sister chemistry onstage that is relatable and quaint. Daryl Freedman is an imposing and disarming Mother Gertrude. Father Peter, Aleksey Bogdanov, is a wonderfully happy-go-lucky father whose soothing baritone blends impeccably with Freedman’s fierce and arresting mezzo-soprano. Soprano Kerriann Otano gives a wickedly solid performance as the Witch. Traditional gender roles are stressed; boys are adventurous, girls are mothers in training, and witches are ugly women. If Hansel and Gretel wasn’t so much fun, that would be a bit of a shame.

Hansel and Gretel is Director Sarah Meyers debut with the WNO. The tricky part of Hansel and Gretel is to keep an opera engaging for a young audience with no opera experience. She does this very effectively by utilizing exaggerated expressions, movements, and dancing. Set Designer Robin Vest’s simple, colorful set pieces ask the audience to suspend reality. Tall trees loom over the stage, glittery dew rains down on the children from on high, and brooms fly through the air. Although I enjoyed the set as a whole, I would have appreciated a bit more indulgence and polish. Costume Designer Timm Burrow’s strengths are evident in his capricious and fanciful designs for The Dew Fairy, The Witch, The Sandman, and beasts of the forest. Michael Rossi conducts the WNO Orchestra. All aspects of the performance are tailored to entice children, from the glamor of the Kennedy Center to the candy they hand out at the end of the performance. I’m not kidding.