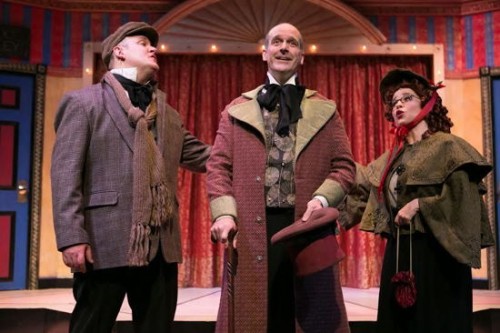 Watch out folks, it’s that “Most, Wonderful Ti-i-ime of the Year” (1,2,3, 1,2,3, oom-pah-pah, blah, blah, blech).  Again.  Face it, you’ve spent a month and half pretending not to notice those candy cane displays that went up before Halloween; but it seems we’re finally on the home stretch for that infernal “Season of Giving.”

And what’s the best way to prepare for the merciless onslaught of wish-lists and cut-throat shopping stratagems, boozy office parties and sugar plum fairies?

…a host of fresh shtick that hardly leaves you time to breathe for laughing.

Why, Metro Stage’s classic, irreverent take on the Charles Dickens story that got the whole mess started in the first place.  Kathy Feininger’s A Broadway Christmas Carol is back, directed by Michael Sharp and featuring the usual suspects, er, cast members, and a host of fresh shtick that hardly leaves you time to breathe for laughing.

Led by the lanky, goofy Peter Boyer as Scrooge, A Broadway Christmas Carol is just as advertised—a tour through our favorite Broadway hits by way of Victorian London, Tiny Tim, & Co.  As improbable as the program’s playlist appears at first (Fantasticks?  Music Man?  Sweeney Todd?) Feininger’s crew manage to tweak the lyrics to the point where you have to wonder whether Dickens hadn’t boarded the Tardis with Dr. Who and sampled a few shows before he settled down to write the thing.

Sharing the stage with Boyer are the dependable, hilarious Michael Sharp and the incredible Tracey Stephens, whose voice will thrill you, and whose taste for physical comedy recalls Carol Burnett on a tear.  Sharp – the show’s deft director—and Stephens switch roles so often that simply referring to them as “The Man/Woman Who Isn’t Scrooge” saves you about an hour of useless program-reading time before curtain.  Together they breeze through the familiar characters armed with a panoply of accents of indeterminate origin, bottle glasses, truly hideous (and hilarious) wigs, opera hats, and a chandelier or three (don’t ask).

Rich with asides, fun “glitches” and star turns, the show is framed by Alison Campbell’s classic cabaret set (with Xmas lights, natch) and Costume Designer Janine Sunday is due for a long massage after assembling an impossible variety of getups—my personal favorite being the gear for Stephens’ turn as Marley’s Ghost, which is an absolute do-not-miss.  Alexander Keen’s lighting fills out the scene nicely, and the preshow features a cozy selection of seasonal pop tunes and (what, no Chipmunks?  Oh, they’re all onstage.  Got it.).  Meanwhile the accompanist Howard Breitbart presides over his grand piano (topped off by a pathetically empty tip jar), skillfully ranging over every tune known to mankind and then some; he also gets a well-earned cameo.

Even if you’ve seen previous incarnations of this long-running show, A Broadway Christmas Carol is well worth revisiting.  The cast rings the changes well and true, and there’s never a dull moment.  Enjoy the show, however insufferable the season itself might be …

Running Time: Approximately one hour and 40 minutes, including one intermission.