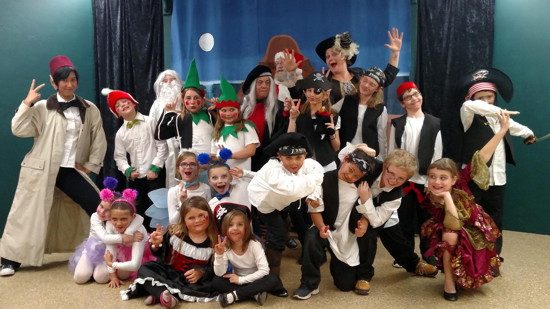 The cast of ‘A Scalawags Christmas.’ Photo provided by New Direction Community Theater.

In a sea of familiar Christmas shows, New Direction Community Theater sets sail with the maiden voyage of A Scalawags Christmas, an original play written by their very own treasurer, Kevin Flynn.

We have all seen how Santa has fared on foggy Christmas Eves, saved by Rudolph’s nose. But, what happens when he crash lands his sleigh on a ship full of scurvy pirates? Well, fun ensues, of course! The cast is comprised of a treasure chest full of almost two dozen children with a couple of stowaway adults aboard the Queenie Jane. Our playwright, Kevin Flynn portrays the head elf, Fizzilgig, who is dealing with a bunch of clumsy elves, trying to pinpoint Santa’s location.

It is delightful to see a group of so many young actors having fun on stage.

If gale force winds hadn’t been enough to send Santa off course, the Auora Snowflake was also missing, allowing the sands from Cairo to blow up through Gibraltar to cause visibility issues and land Santa and his reindeer all hands and hoofs on deck. Santa is immediately taken and thrown into the brig while the captain and crew try their best to figure out what to do with them after his offer of gifts only nets what you would expect a group bad mateys to get. Luckily, the reindeers have a magical force field to protect them from any pirate plundering of the Christmas loot.

On top of Santa being missing, the North Pole is running out of coal! So, the elves must find Santa soon, before he hands out all of the coal to the pirates and is forced to walk the plank, ending the tradition of gift deliveries for all the good lads and lasses.

The theme of the play centers around humanity’s worth for the Christmas loot. Obviously, there has to be a “Black Beard” in this story. Like most Christmas stories, someone has to be disgruntled to actually NOT want Christmas to happen! But, can Santa prove them wrong – that there is good in everyone, if you just give them a chance? You should check out this show to see for yourself!

It is delightful to see a group of so many young actors having fun on stage. Kudos to director, Sherry Mervine for getting so many little ones, as young as 6 years old, on stage and having fun performing. You just may get hornswaggled into believing that you are aboard the Queenie Jane on this fun Christmas adventure.

But, don’t let this ship sail you by. This is the last weekend to set sail on this adventure. So, surrender your booty!

Shows are December 12th at 7 p.m. and December 13th at 2 p.m.at Long Beach Community Center, located at 5845 Calvert Boulevard St. Leonard, Md. Tickets Aaarg $10/general admission and $8/Seniors and Children and can be bought at the door. Though, reservations are suggested and can be made on their website at https://ndctheater.org/Tickets.html or by calling 443-624-4484.