Theatre Review: ‘A Year with Frog and Toad’ at Imagination Stage 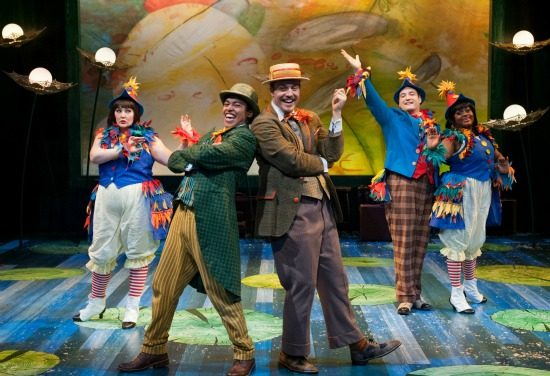 Frog and Toad are the best of friends, and everyone in the forest knows it! (L-R: Tracy Lynn Olivera, Jobari Parker-Namdar, Stephen Edwards Horst, Matt Dewberry Nova Y. Payton,) Photo by Margot Schulman.

There’s a lovely sense of recurrence in A Year with Frog and Toad, currently playing at Imagination Stage, which seems particularly apt for a show tied to the passing of the seasons. The return of migratory birds opens and closes the piece and in each vignette that make up the bulk of the play’s action we are invited to overcome adversity through friendship, every time affirming that Frog needs Toad, as Toad needs Frog. Finally, for those audience members whose feet reach the auditorium ground from their seat, there is also a chance to return, if for a short time, to our own childhood. The show is vividly rendered, engaging, and enjoyable even without a detailed knowledge of the classic Arnold Lobel books on which the musical is based. In the final scene a Taoist allusion to the fine line between waking (hibernating) and dreaming invites the possibility that the whole play may itself be a pleasant recurring dream.

There’s something archetypical about Frog and Toad. One carefree, the other anxious, one sunny the other grumpy, but like any good archetype it’s their uniqueness that makes them truly enduring and endearing. Colin Hovde’s direction highlights this throughout while Jobari Parker-Namdar and Stephen Edwards Horst’s performances (Frog and Toad, respectively) are beautifully crafted and individual. Parker-Nambdar’s singing voice is clear and lovely, his exuberance radiating from the stage. From Horst’s first utterances as the mildly misanthropic Toad, the children in the audience were laughing along enthusiastically.

There is not just theatre-magic here, but real magic

While many of the scenes are self-contained, the one dramatic through-line comes courtesy of the snail with the mail. Overjoyed by his given task, and unperturbed by his pace-challenged disposition, ‘neither snow, nor rain, nor heat, nor gloom of night stays’ him from his task. I won’t spoil the best pun I’ve ever heard on “escargot,” but keep an ear out for it.  Matt Dewberry’s snail is outstanding. In his brief appearances throughout his slow-motion comedic timing and vocal performance are tremendous. Dewberry, together with Nova Y. Payton and Tracy Lynn Olivera serve admirably as the choric birds, as well as a variety of additional characters.

One of the challenges of turning an illustrated children’s book into a stage production must be the particular and highly visual language of the original. Kendra Rai’s costumes, however, give no hint of this difficulty. They are subtle and inventive, bright and beautiful. Andrew Cohen’s set design is superlative. Part story-book, part fairy-tale, part vaudeville, part impressionist art – all magnificent – it is flawlessly unified and integrated, ornamented with re-purposed umbrellas as well as frog footlights. Perhaps the best critique I can offer, though, comes from a young audience member sitting next to me, who, gasping as curtains opened to reveal falling snow, exclaimed admiringly  “what is that? actual snow?” There is not just theatre-magic here, but real magic.

The original stories come from a few decades ago and there are perhaps a few refrains in the show that I would want to clarify if taking along a younger audience member, to do with healthy eating (“cookies”), or bullying and positive body image (“toad looks funny in a bathing suit”). The show seems a good way to raise these issues with impressionable minds.

Assessing the year that has passed with Frog and Toad, we hear that “some things change and that’s good, and some things don’t change and that’s good too.” It could be an assessment of this tale’s journey from page to stage. It’s all good. It’s also a great way for the family to have, in the show’s own words, a “merry almost christmas” and “happy almost new year.”