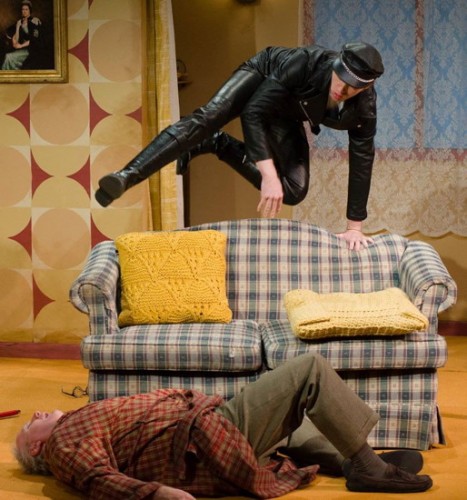 Audiences back in 1964, when the play first opened, apparently found Entertaining Mr. Sloane anything but. To put it mildly, they were shocked.

Joe Orton’s inaugural work for theater is described as a dark comedy, with an emphasis on the “dark.” Some might question whether a play incorporating lust, manipulation, violence, and deceit—of oneself and others—can be called a comedy at all. Add the undercurrent of homosexuality—at the time still illegal in England—and the shock level rose.

This well-done production reminds us of the relevance we can still find in a work born of a very different era.

Orton, part of the “Angry Young Men” movement of the British theater scene, was savagely poking fun of middle-class morality. His own life was not far removed from the play and the character of the handsome and sexually ambiguous Mr. Sloane—whose first name we never learn.

This many years later, audiences like the one on November 29 at the Edge of the Universe 2 Players production of Entertaining Mr. Sloane seemed more amused and less stunned by the happenings on stage, though there were a few gasps.

This well-done production reminds us of the relevance we can still find in a work born of a very different era. Director Stephen Jarrett, in his words, emphasized its many disparate elements: including comedy and tragedy, melodrama and farce, and Orton’s “sparkling wit.”

Sloane is a like combination of Oscar Wilde’s comedy of manner plays and The Picture of Dorian Gray. With a touch of the ghoulish thrown in.

One difficulty with the play, set in a house on the edge of a rubbish dump in London, is that none of the four characters can be called sympathetic—though there are moments of pathos concerning each of them, even if fabricated.

The father, Kemp (David Bryan Jackson), is half-blind and remembers witnessing a murder. His daughter, Kath (Claire Schoonover), who lives with him, had a child out of wedlock years earlier. She and her brother, Ed (Jim Jorgensen), argue whether it was the child’s father or his family who opposed her marriage. Lastly, Mr. Sloane, who can only be called amoral, pleads his case of a deprived and orphaned childhood that may or may not justify anything.

In envisioning what the good-looking title character might look like in an actual production, I pictured a young Peter O’Toole—and admit to being initially perplexed by the casting of Matthew Aldwin McGee, at least physically. Boy, was I wrong. There wasn’t a false note in his portrayal of a very complex young man who we may not like but are fascinated by. It’s a performance that stays in the mind long after one sees it.

On the flip side, Schoonover is probably too attractive (even when chasing Kath’s fallen false teeth) to deserve Ed’s description as a fading middle-aged woman. She does, however, fully convey the character’s pathetic grasping for love—though lust will do—and her hysteria. Bryan Jackson presents a creepy Kemp, but one we can’t help feeling somewhat sorry for. Again, the ambiguity of the characters is fully realized.

Jim Jorgensen is delightful as the slippery Ed—who covers up, he thinks, his closeted gayness through the propriety of being Mr. Sloane’s employer. But double entendres and the leather uniform he gives the young man tell more.

David Bryan Jackson provided the effective dialect coaching. There were a few lapses into more-educated English than these characters would have spoken, but the accents were definitely and consistently British.

Giorgos Tsappas designed the deliberately tacky set, with wallpaper reminiscent of the ‘60s geometric patterns. Deon Leong was the Chief Set Builder. Erik Teague did the costume design, including that leather suit and something more revealing for Kath. Marianne Meadows was the lighting designer. Ed Moser was the production manager and sound designer.

Advisory: Ages 16 and over. Sexuality (suggested rather than explicit), mild semi-undress, language, and violence.