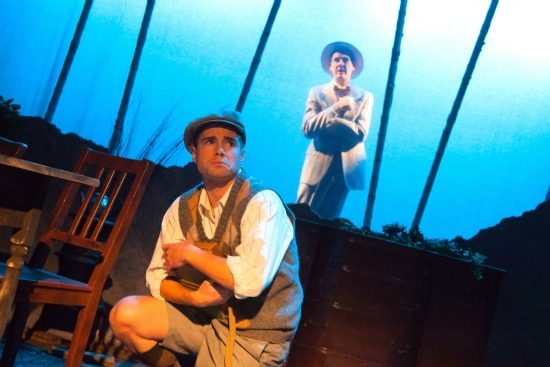 There is already a wintery chill in the D.C. air. It’s almost ‘fruitcake weather,’ as Truman Capote’s older cousin and childhood friend, Miss Sook, might put it. There is thankfully, however, genuine warmth just across the Potomac in WSC Avant Bard’s production of Holiday Memories. Based on two autobiographical short stories by Truman Capote, Holiday Memories brings to life “Depression-era America” in “The Deep South.”

In the first half, the anxious spinster Miss Sook, who in Capote’s estimations is “entirely without social talent,” and Buddy, Miss Sook’s name for the young Capote, prepare for Thanksgiving. In the second half, this inseparable pair, pulled together by what Capote calls their “separate loneliness,” celebrate Christmas. The unlikely duet becomes a loving trio in combination with the charismatic terrier, Queenie, delightfully embodied on stage and off by Liz Dutton.

…a play of joy, and a truly joyful production…

Good Literature does not, of necessity, make good theatre. This adaptation by Russell Vandenbroucke, and production directed by Tom Prewitt, however, achieve the not insignificant task of making beautiful theatre out of beautiful literature, adding something special of their own in the process. Capote’s voice, and presence remain, in his narration shared between Buddy, and the adult Truman, but there is a delicate interweaving, and overlaying of Capote’s elegant language with a visceral theatricality. It is seamless and a pleasure to watch.

Charlotte Akin is captivating and endearing as Miss Sook, while the unmistakable manner of Truman is powerfully rendered by Christopher Henley. The young Buddy (Séamus Miller) is exuberant as the 7-year-old Capote, if at times a little over-wrought. Liz Dutton and Devon Ross admirably take on a staggering arraying of additional characters, often in quick succession. Colin Dieck’s set and lighting, Danielle Preston’s costumes and Jeffrey Dorfman’s sound are individually stunning and collectively enveloping. They create, as needed, 30s Alabama, or the timeless, placeless space where Buddy and Truman co-exist as well as the spaces within and between these two extremes.

Buddy learns from his friend in the first half that “deliberate cruelty” is the one “unpardonable sin,” and there is little doubt that the young Capote had to endure a significant amount of cruelty, deliberate or not, in his childhood. We see some of this on stage, but his time with Miss Sook and Queenie, the focus of the stories, are amongst the “happiest” moments in an “otherwise difficult childhood.” So while the tale may be set on a background of sadness, Holiday Memories is more a play of joy, and a truly joyful production, unperturbed, if occasionally heightened by the undercurrent of sadness. While we are vaguely aware of the “eventful worlds beyond the kitchen,” Miss Sook and Buddy’s friendship has little need of it, each recognising in the other, the familiar, if eccentric habits of a “sane person of a solitary nature.”

There’s an old Woody Allen routine where just before death, he sees his whole life passing before his eyes. At a certain point he realises that the carefree southern childhood he is seeing is not his own childhood at all, but someone else’s. There is an alluring familiarity and nostalgia to WSC Avant Bard’s production that lets you, for a moment, lose yourself in an extraordinary story of childhood, which you could mistake for your own, no matter how far removed it is from your own. As the production asks us directly “Remember when you were a child and joy was simple?” This production is a beautiful reminder.